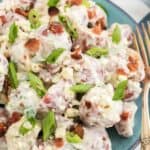 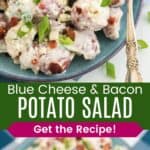 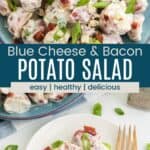 Lighten up your next barbecue with this Healthy Blue Cheese Bacon Potato Salad! Swap the mayo for Greek yogurt, add just enough sharp blue cheese and salty bacon for flavor, and you get an easy summer side dish that’ll disappear fast.

Potatoes get a bad rap. Perhaps that’s because most of the time we eat them fried, covered with cheese, or mashed with copious (admittedly delicious) amounts of butter and cream.

Away from all the bad influences, however, one medium-sized potato has only 110 calories, zero fat, more potassium than a banana, two grams of fiber, and half your daily value of vitamin C! All this to say: potatoes can definitely be part of a healthy diet.

Which is a good thing, because everyone in my family goes nuts over potato salad. This healthier, no-mayo potato salad recipe uses plain Greek yogurt in place of mayonnaise, amped up with just the right amount of blue cheese and lean bacon for flavor. I’ve honestly never had a potato salad hit the palate in so many ways in just one bite!

Here’s everything you need to make this amazing, healthy potato salad! The creaminess and tang from the yogurt, combined with the sharp bite of blue cheese and smoky lean bacon is truly next level. Find full amounts for each ingredient further down in the recipe card!

What Kind of Bacon is Best?

Any bacon you like! My lightened-up bacon potato salad uses center cut bacon, since it’s a lean version of regular bacon that has the fat trimmed off. You can use another variety like smoked bacon or even turkey bacon as well, thin or thick cut – though I find thin cut bacon is best as it sticks nicely to the potatoes!

This lightened-up potato salad with bacon is easy to pull together in just four steps:

Cook the Potatoes: First, boil the potatoes in water until they’re fork-tender. Drain and leave them to cool. It’s important that the potatoes cool completely, so that the dressing doesn’t melt and slide off!

Cook the Bacon: Crisp the bacon up in a skillet, drain any grease, and then chop or crumble it.

Make the Dressing: In another bowl, whisk together the ingredients for the Greek yogurt dressing. You can also chop up the scallions while you’re at it.

Toss and Serve: Fold the bacon bits into the dressing, followed by your crumbled blue cheese and scallions. Finally, combine and toss the potatoes with the dressing, and serve!

Some extra guidance to make your potato salad a roaring success for your next cookout:

A potato salad is such a versatile add-on to any meal! You can swap out and add in ingredients to suit your family’s unique taste. Here are some ideas:

Potato salads are so synonymous with summer, that’s immediately where my mind goes when I think of serving suggestions! And it goes so well with a nice, lean filet, some roasted asparagus, and a nice Cabernet. A perfect summertime meal.

I love to bring this healthier take on a classic bacon potato salad along to potlucks, too. And 4th of July barbecues. Not only is it tasty and healthy, but the red potatoes, white dressing, and blue cheese matches the theme, too! Serve it next to other favorite grilling recipes:

For more simple sides to complete the barbecue menu, enjoy your potato salad alongside the following:

Leftover potato salad keeps well in the fridge for up to one week. In fact, the flavors only get better with time! Store potato salad airtight and serve it either right from the fridge or let it come to room temperature.

Can I Freeze Potato Salad?

Technically, yes. However, freezing potato salad should be a last resort. Even though this recipe doesn’t contain mayo, it still contains dairy – and as a result, is not ideal for freezing. Potato salad that’s been frozen and thawed just doesn’t have the same taste and creamy texture as it does when it’s fresh! 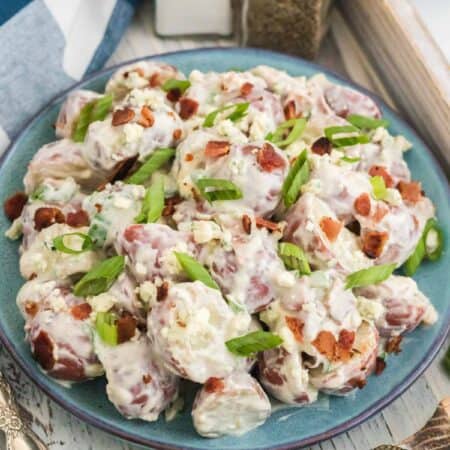 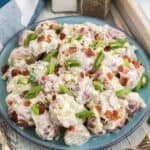