Asparagus salad with caramelized leeks brings the best of spring vegetables into a bowl for an easy healthy side dish. Add dried cherries or cranberries, goat cheese, and balsamic vinegar, and you have one flavor-packed veggie recipe. Since you can serve this roasted asparagus salad hot, room temperature, or cold, it’s versatile enough for a weeknight dinner, a meal-prep lunch, or even to bring to a party or holiday. One of my favorite gluten free asparagus recipes is definitely this Caramelized Leek Asparagus Salad.

I told my family that I would bring asparagus “something or other” for Easter. Nothing like being vague, but I guess that’s a food blogger’s life when we are brainstorming recipes.

So we had our usual ham and kielbasa. Of course, there was our Ukrainian Easter bread, Paska. We had the usual Hrudka and Syrnyk, which are Ukrainian cheeses. Mom made potato salad. And we always have a selection of Easter desserts.

And this asparagus side dish recipe. It’s a good thing, too. Because other than my aunt’s tossed salad (which was yummy with the addition of some cilantro), this was the only veggie. Our family’s Easter menu is typically heavy on the carbs and pork products. So this spring vegetable side dish was actually a nice, light contrast to the heaviness of the meal.

Several years back, for a previous Easter, in fact, I brought Rachael Ray’s Asparagus-Caramelized Onion Salad to my friends’ house. It was quite delicious, and I’ve made it a few times since. I had originally thought about that recipe for Easter this year, but I wanted to incorporate another of those spring shoots, and I wanted to make it just a little more exciting.

How do you make Asparagus Salad with Caramelized Leeks?

Need a quicker way to roast the asparagus? Follow the directions for air fryer asparagus, and toss in those mushrooms too. It’ll be ready in under 10 minutes!

Can Asparagus Salad be served at room temperature?

Caramelized leek and asparagus salad is definitely a dish that you can bring to a party or holiday gathering. Why? Because while you should store it cold, you can actually serve it hot right after you make it, cold out of the fridge, and yes, even at room temperature.

What are some other Easter recipes to go with your meal?

Whether you make a Maple Glazed Ham, Prime Rib, or Leg of Lamb from All Day I Dream About Food you need side dishes to complete the meal.

This easy side dish recipe features the best spring vegetables. It’s a flavor-packed combination of roasted asparagus, caramelized leeks, dried cherries, and goat cheese. Balsamic vinegar and Dijon mustard pull everything together for a taste you can’t resist. It’s healthy and gluten free too. 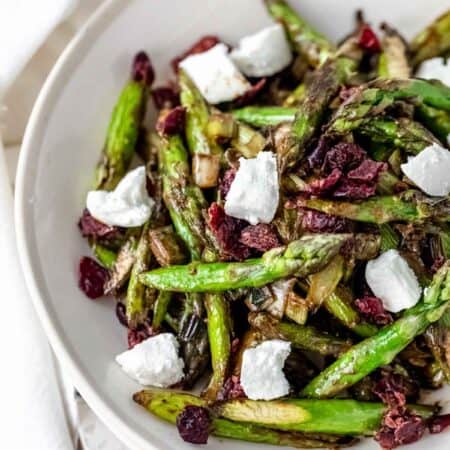 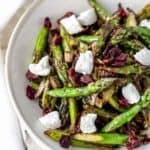