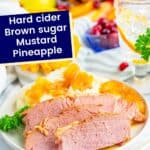 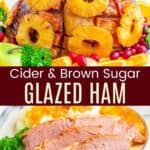 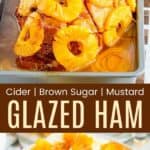 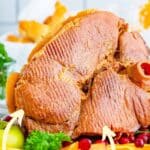 For a classic holiday meal, let the centerpiece be this Brown Sugar Pineapple Glazed Ham. The sweet and tangy glaze also has apple cider and pineapple juice, making it a festive and delicious main dish for your Easter or Christmas menu this year!

There is nothing more satisfying than walking to the table with your family gathered around and presenting them with an absolute showstopper. You know, the kids of dish that make everyone turn their heads and ooh and ahh as you carry it into the room.

It could be a perfectly roasted turkey. Maybe you’ve made a grand prime rib recipe. But some occasions call for a glorious baked ham like this one.

The best part about this glazed ham recipe, like many of those centerpiece dishes, is that it is actually easier than it looks. And of course, it tastes just as amazing as it looks. Maybe even better!

What kind of ham do you need?

For this recipe, you will need a pre-cooked ham. You’ll be looking for the shank or butt end with the bone in. This is also known as a “city ham”, which is usually brined and smoked.

Since the hams are fully cooked, you can actually slice it and eat it cold. In fact, many are sold pre-sliced. For this recipe, you DO NOT want a spiral sliced ham.

This entire ham plus the glaze can be made with just a handful of ingredients. Here’s what you’ll need:

For the baked ham:

For the pineapple ham glaze:

How to Make Pineapple Glazed Ham

While it does take some time in the oven, your hands-on time is only about 15 minutes to end up with a sweet and tangy baked ham that is coated in a luxurious glaze and packed with amazing festive flavors.

Prepare the ham for baking

If your ham has a rind, you can trim it off, but be sure to leave a thick layer of fat. Place the ham in a deep baking pan.

Then with a paring knife, lightly score the fat/meat into a diamond shape, being sure not to cut too deep. Press cloves into the ham and secure pineapple rings to the outside with toothpicks.

REMEMBER: save the juice from the can of pineapple!

Pour the hard cider and pineapple juice over the ham and scatter sliced onions around it. Now bake at 325°F for about 15 minutes per pound.

Make the glaze by mixing the brown sugar and mustard with a couple of tablespoons of the juices from the baking pan to make a smooth paste.

Brush the glaze over the ham and return to the oven for another 30 minutes or so to caramelize the glaze and heat the ham all the way through to an internal temperature of about 140°F.

Before serving, let the pineapple glazed ham rest for about 30 minutes. Serve with the pineapple slices and the drippings on the side as an au jus if desired.

Make it a Meal – side dishes to serve with ham

While the meat itself is naturally gluten free, the ingredients used in the brines to make the hams of the glazes that come with them may not be. This is why it’s a good idea to make your own, and why I am sharing this apple cider glazed ham recipe using ingredients that don’t contain gluten.

However, it is best to stick with those that are certified gluten free. Look for hams from brands like Cook’s and Jones Dairy Farms, which are gluten free at the time of this writing. Be cautious with brands like Smithfield, Hormel, and even HoneyBaked Ham Company, which could be a risk.

If you have any leftover ham, be sure to wrap it tightly, and you can keep it in the refrigerator for about a week. You can also wrap it and place it in a plastic freezer storage bag and freeze for up to two months.

What can you make with leftover ham?

And don’t throw away that ham bone. You can use your ham hock to make Split Pea Soup with Ham. 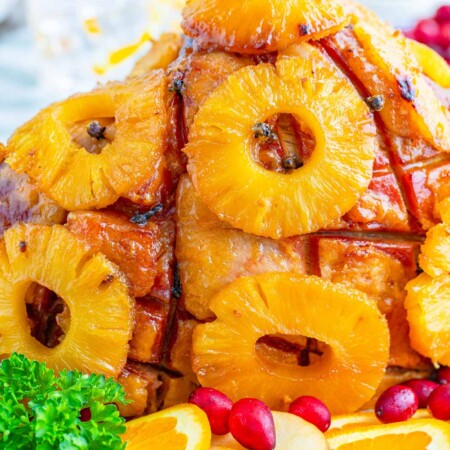 This is the classic holiday main course, but with even more sweet and tangy flavors because it is baked in a mixture of hard apple cider and pineapple juice that are used to make that thick glaze. Festive and delicious, this is a must-make for your Christmas menu this year!
Prep: 15 mins
Cooking time is 15 minutes per pound plus 30 minutes. Add resting time of 30 mins
Servings: 16
Print Rate Pin Save Saved!
Prevent your screen from going dark 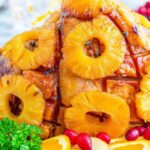