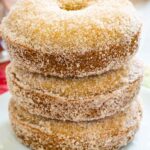 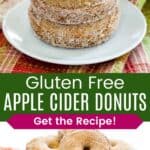 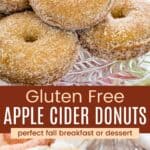 Love these donuts for breakfast? Then you must make Gluten Free Apple Cider Donut Cake for dessert!

If you’ve ever been apple picking, you know that aside from the bounty of apples that comes with it, there’s one more MAJOR perk of raiding the local orchard. Fresh, unfiltered apple cider, right from the source. And in this house, a fresh jug of apple cider means donuts. Naturally.

I love these baked apple cider donuts for so many reasons. First and foremost, this recipe is gluten-free, so no one needs to miss out on cider donut season around here. Secondly, these homemade donuts are ready in under 30 minutes! Of course, then you have the irresistible texture: perfectly tender, fluffy, and moist on the inside, crunchy and sugar-crusted on the outside.

These donuts would have apple flavor coming out of their ears, if they had ears. Instead, they pretty much radiate apple cinnamon warmth.

This is a simple, healthier recipe for authentic cider donuts made with real apples, gluten-free and oat flours, and a mouthwatering coating of cinnamon sugar. Unsweetened applesauce takes the place of butter in this homemade donut recipe, too, for a lighter sweet treat that’s extra full of apple flavor!

These homemade apple cider donuts come together with a small list of ingredients, making them one of my go-to fall desserts. I’ve outlined what you’ll need below for the donuts as well as the coating, with the full amounts available further on in the recipe card.

Can I Use Apple Juice Instead of Cider?

First choice is always to use real apple cider whenever you can. However, if you’re in a pinch and desperate for apple donuts (understandable), it is fine to use unsweetened apple juice as a substitution. Do note that the flavor won’t be quite the same, though.

How to Make Gluten-Free Cider Donuts

While your oven is preheating, give two donut pans a coating of nonstick spray. I use two standard-sized 6-well donut pans, but you can use whatever size you have on hand, and work in batches if you need to. Next, let’s make some donuts:

Fill the Pan: Distribute the batter evenly between the wells of your greased donut pans. This recipe should yield about 10-12 donuts, depending on how thick you’d like them to be. Whatever you do, you don’t want to fill them over the middle point that forms the donut hole! Lastly, once the batter is in the pans, give each pan a light tap against the counter to release any air bubbles.

Bake: Place your donut pans into the preheated oven. After about 10-15 minutes, the donuts should be puffed up and golden, and a toothpick inserted into the thickest part should come out clean. Give the donuts a few minutes to cool in the pan before moving them over to a wire rack.

Coat in Cinnamon Sugar: While the donuts are cooling, stir some cinnamon into the sugar for the topping. When ready, lightly brush the donuts with melted butter and dip them into the cinnamon sugar. Really let them roll around in it, so that they’re coated on all sides. Then, all that’s left is to get your pot of coffee or tea brewing, and serve!

These apple cider donuts are so quick and easy, you should have no problem making them at home. Here are some quick tips to ensure that these come out 100% perfect every time:

A fresh baked donut is one of my favorite sugar fixes. Nothing is more tempting than one of these gluten free apple cider donuts on a cozy fall day, paired with a hot cup of coffee or tea. If you’re looking to serve these donuts as part of a larger meal though, here are my suggestions:

How to Store Extras

Store homemade donuts airtight in a resealable bag or airtight container. They can be kept at room temperature for a day or two, ready to zap in the microwave for quick warming. You can also store your apple cider donuts in the fridge for up to one week, or freeze them for even longer storage, see the next section.

Do These Freeze Well?

These apple cider donuts freeze very well as a longer-term storage solution. Try to freeze the donuts on the day you make them – this way they’ll be the freshest when thawed.

To freeze the donuts, wrap the cooled donuts individually in plastic wrap and then place them in an airtight container or freezer bag. They can be stored for up to 3 months. Thaw the frozen donuts on the counter overnight, or you can also defrost them in the microwave for about 20 seconds.

Once you get your hands on a donut pan, you’ll be ready to bake these irresistible Apple Cider Donuts, plus all the gluten free donuts your heart desires. I have this 2-Pack of Donut Pans from Bellemain so that I can bake the full batch of 10-12 donuts at one time. The non-stick surface means that with a light coat of cooking spray, they slide out like a dream.

Now I know you are ready to make baked donuts all the time. So here are some recipes you’ll enjoy: 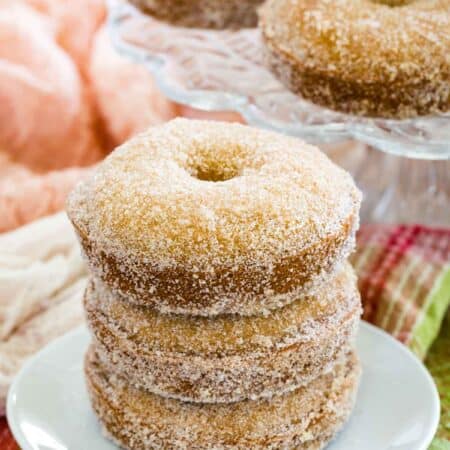 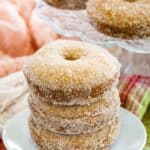