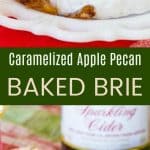 With just six ingredients, this easy Caramelized Apple Pecan Baked Brie recipe is an instant hit at holiday parties! You can’t go wrong with warm, melty cheese topped with sweet and nutty caramelized apples and pecans; this is the ultimate fall appetizer that’s ready in minutes.

This Baked Brie Recipe is Perfect for Fall

When it comes to holiday dinners, I come from a family where “no-fuss” takes on a whole new meaning: pre-made biscuit dough, cranberry sauce from a can, and gravy from a jar. Corn pudding is about as gourmet as the homecooking gets for big family meals! As much as I love to bust out my culinary chops, I’ve also learned that simple can often be just as delicious.

This in mind, when it comes to party appetizers, my holiday season staple is a delicious Baked Brie. It’s funny how one of my most simple recipes has become my signature dish, from Thanksgiving to Christmas dinners. Don’t we love it when something so easy is also super impressive?

For all their no-fuss tendencies, the family gets fancy with their requests for French cheese, all bubbly and delicious. That’s where I’ve gotten creative with variations like my Pineapple Pecan Baked Brie and Honey and Nut Baked Brie with great success! This fall, inspiration struck again for a little something different. Which is what led me to this absolutely mouthwatering, seasonal recipe for Caramelized Apple Pecan Baked Brie that will definitely be on repeat throughout the holidays.

This recipe really goes all-out in the fall inspiration department. Cozy spices, crisp apples and the rich flavors of brown sugar and pecans; the ingredients list is the stuff of autumn dreams! And it’s only six items long:

Do I Need to Remove the Rind from Brie?

Not only is the rind edible, it’s best if left on! This will hold the Brie’s gooey insides in place while the cheese is baking and afterwards once the toppings are added. Before baking, score the top of the rind lightly using a sharp knife so that it’s easy to peel off once warm, leaving the sides intact.

How to Make Baked Brie

This recipe for baked Brie is truly a thing of holiday beauty. With only six ingredients and a few minutes in the oven, you’ll be serving this delicious cheese dip to your friends and family in no time at all. Follow these steps and revel in how simple and special this baked appetizer is to make:

Bake the Brie: It all starts with the Brie cheese. Score the rind and warm the cheese in the oven until it becomes melted, then peel the rind off the top. Even at this stage, it’s perfect for dipping crackers, bread, or apple slices. While that alone is enough to make me weak in the knees, it gets better!

Make the Apple Pecan Topping: During the cheese’s brief stint in the oven, mix together your apple pecan topping with brown sugar and just a hint of cinnamon, and boil it in the apple juice until it becomes thick and sticky. Pour that over the top of your baked Brie, and you have heaven on a cracker.

What to Serve with Baked Brie

Serve your Brie alone with crackers or as the centerpiece for a larger cheese board alongside bunches of grapes, cured meats, fruit preserves, mixed nuts, and other plain cheeses like goat cheese and Roquefort. Here are some more suggestions for serving:

My family and I absolutely love enjoying a Baked Brie served alongside a glass of Bubbly or Sparkling Cider. Along with being the secret ingredient in this recipe’s caramelized Apple Pecan topping, Martinelli’s Sparkling Juices and Ciders have been our go-to bubbles on special occasions like Christmas, Thanksgiving, and New Years for decades!

Can I Save Extras for Later?

You can absolutely save Baked Brie leftovers, melted with the caramelized topping, to reheat or repurpose! Keeping in mind that a full Brie wheel takes only a couple of minutes in the microwave, use this as a guide when reheating the extras. You can also reheat leftover Brie in the oven the same way it was baked in the first place.

Leftovers can be enjoyed spread onto toast or crackers. 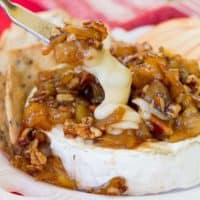 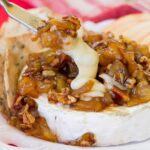