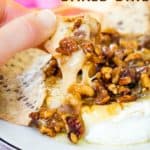 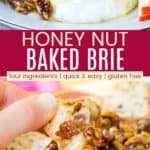 This Honey Nut Baked Brie is creamy, crunchy, and sweet! Hot and gooey Brie cheese is topped with nuts coated in honey with a hint of cinnamon. Get your favorite crackers, apple slices, and your taste buds ready for a fantastic treat because you’ll go “nuts” for this easy appetizer idea.

Everyone Loves this Baked Brie Recipe

Do you have a recipe that your friends or family ask you to make for every gathering? Or maybe they don’t ask you, it’s just kind of implied that you’ll bring it. This, my friends, is that recipe.

I may be a food blogger capable of and always wanting to try new things. But it is this melty cheese topped with sticky, nutty goodness that is my most requested contribution to any party.

I originally got it out of one of the coupon inserts in the Sunday paper but over the years I have tweaked it a bit to make it even easier and better than the original recipe. And honestly, it’s not the most sensitive of recipes, so while I do give you measurements in the recipe, it’s not critical to use exact amounts. I usually eyeball everything and it still turns out perfectly caramelized and gooey and oh, so good!

All you’ll need is 4 ingredients, about 20 minutes, and a stack of crackers and apple slices for dipping. I guarantee if you make it, you’ll be asked to bring it again and again and again.

What is Baked Brie?

Brie cheese is a mild, soft cow’s milk cheese named after the region of France where it originated. But it is now produced in other parts of the world. The inside is soft and creamy, while the outside is covered in a white rind. You can typically buy it in rounds or wedges and can find it in many grocery stores.

When heated it melts and becomes semi-liquid, perfect for dipping. And its mild flavor means that it pairs well with a variety of ingredients from sweet to savory.

You can make a topping for the Brie, like this recipe, and top it after baking. Or you can wrap the Brie in phyllo dough or puff pastry before baking.

Do you take the rind off before baking?

The rind of Brie is edible. However, some people prefer not to eat the rind. Also, it is hard to scoop up the cheese with the rind still attached. Therefore, I like to remove the top of the rind before serving. Here is how I do that.

How to Bake Brie

This recipe is so simple! First, you are going to bake your brie (or warm it in the microwave). Then you’ll make the topping while the cheese warms up.

While the cheese is melting, toast some nuts in a pan. Get them all nice and caramelized with honey, cinnamon, and a pinch of salt. Here’s how:

You have a number of options for dipping in your Brie cheese. For softer dippable items, like the pita bread, I recommend including a small butter knife or serving knife so that it’s easier to scoop up the brie.

Or, you know, you could also just eat this with a spoon. It’s all good, whatever way you choose. I’m a big supporter of equal opportunity cheese consumption.

Making this Appetizer for a Crowd

Having a bigger party? Double the topping and get one of those giant wheels of Brie from Costco.

Can’t find the round ones? Then get a couple of wedges, slice the rind off the top, and press them into a ceramic baking dish. This is such a low maintenance recipe. Gotta love it!

Yes, this baked Brie appetizer recipe is gluten-free. While in the past there were concerns that it might not be due to the source of the mold spores used to make Brie. There has been repeated testing that shows Brie to have undetectable levels of gluten regardless of the source of the mold spores. However, if you have a severe sensitivity or are unsure, you might want to consult a doctor or avoid it altogether.

While some recipes like this Cranberry Pistachio Brie Wrapped in Phyllo are covered in doughs that do contain gluten, this recipe has no other gluten-containing ingredients. Just be sure to enjoy it with fruit slices or gluten free crackers. Or eat it with a spoon. I won’t judge!

This is truly a versatile appetizer because you can customize it in endless ways. You follow the same steps for how to bake Brie but then add your favorite toppings. Here are all of my favorite Brie recipes:

For a fun twist, take the same honey nut mixture along with your Brie cheese and stuff it in these Honey Nut Baked Brie Bloomin’ Apples.

This oozy, melty, cheesy appetizer recipe is my go-to for the holiday season and really all year. Since it takes just a few minutes to make, it’s easy to whip up and impress your friends. They’ll be even more impressed that it only takes four ingredients to put together such amazing flavors. Grab your crackers and apples and get ready to scoop up this delicious Brie cheese topped with honey and walnut and pecans. 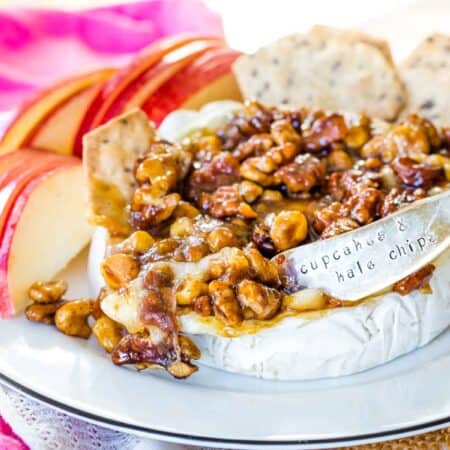 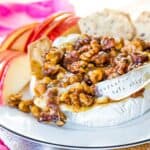