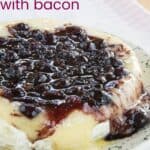 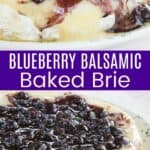 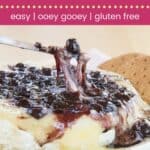 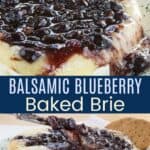 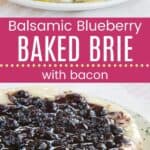 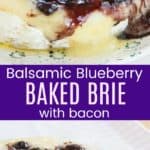 Balsamic Blueberry Baked Brie with Bacon is the kind of ooey gooey appetizer that will make your heart go aflutter. Whether you dip crackers, apple slices, or a spoon, this swoon-worthy sweet and savory snack is sure to disappear at any party. It’s an easy gluten free appetizer recipe perfect for any occasion.

Raise your hand if you feel like you are socially awkward?

I totally do. I make it through the “Hi, how are you, and how is your family?” stage, but beyond that I kind of lose it.

Sometimes I just don’t say anything. As the science-geek-turned-food-blogger-recluse that I am, I feel like I either stick out like a sore thumb or blend into the background totally unnoticed or totally uninteresting.

Worse than that is when I latch on to one thing someone says and then start rambling endlessly about myself or some totally obscure topic. I try to stop myself, but once I get going, well, it’s just a slippery slope.

I think I just need more practice. Soooo, who wants to invite a social misfit to some parties? Any takers? I’ll bring appetizers.

Because what I lack in social skills I make up for in my ability to provide deliciously melty Baked Brie recipes. We can go classic with Caramelized Apple Baked Brie. Give it a bit of tropical flair with Pineapple Pecan Baked Brie.

Or perhaps my piece de resistance…

This baked Brie recipe has a delectable combination of rich and savory flavors with the perfect amount of tangy sweetness.

A simple mixture of blueberries and balsamic vinegar is simmered together while a wheel of baked Brie cheese gets melty in the oven. Add just a bit of bacon for the perfect amount of smoky salty flavor and you have a cheesy blueberry appetizer worthy of any special occasion.

You only need a few things to make Blueberry Balsamic Baked Brie.

To bake the Brie

To make the blueberry topping 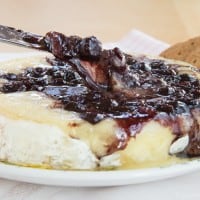 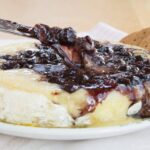