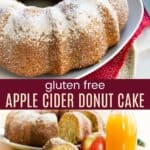 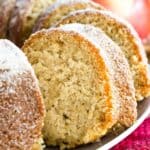 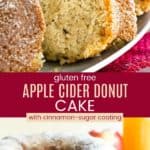 This tender Gluten-Free Apple Cider Donut Cake is flavored with apple cider and coated in cinnamon sugar. So not only does it taste like an apple cider doughnut, it looks like one too!

During the fall when apples are in season, one of the traditions in my area is to visit the local apple orchard and get a crinkly bag filled with fresh donuts. They are made right there with the orchard’s own apple cider and the smell is divine. After our last trip, I decided to re-create the experience at home. My kiddos would be the taste testers and judge whether I’d hit the mark!

As you probably know, there are two kinds of donuts – yeast or raised donuts. My Air Fryer Gluten-Free Glazed Donuts are an example of yeasted donuts. Since apple cider donuts are a type of cake donut, then it only makes sense to turn them into one giant donut – an apple cider donut cake! And of course, I made my cake gluten-free so that I could have some.

I served warm slices of fresh donut cake to my family and they all said the flavor and texture of this confection reminded them of the orchard. Success! I hope you make this gluten-free bundt cake and get in on some of this goodness.

What is Apple Cider Donut Cake?

A donut cake is exactly what it sounds like: a ring-shaped cake baked in a bundt pan with a tender texture similar to cake donuts. The donut-like batter is baked in a bundt pan, then coated in butter and cinnamon sugar to give it that sweet, crisp exterior. It really tastes like an apple cider doughnut, which makes it a treat you can enjoy for breakfast or dessert!

What Makes this Cake so Good?

Other than picking up some apple cider, this cake is made with items that most home bakers keep in their pantry.

For the gluten free apple cake

For the cinnamon sugar topping

Can I use apple juice instead of apple cider?

Apple juice and apple cider are technically two different things. Both are the juice of pressed fresh apples. But apple cider is brown and almost opaque, with a deep tangy apple flavor. Apple juice is basically apple cider that has been filtered to remove the pulp. This leaves it with a paler color that is nearly transparent, as well as a lighter, more crisp flavor.

For this recipe, I used apple cider, which is what gives the apple cider doughnut cake the best, most authentic flavor.

You can use apple juice as the liquid. However, if you are truly craving the flavor of a real donut, then apple cider is the way to go. And I don’t mean sparkling cider or hard cider. You’ll want to use the real stuff from a local apple orchard or the refrigerated section of your local grocery store.

How to Make This Gluten Free Donut Cake

This impressive cake is actually quite simple to make. Greasing the pan is really the most critical part, and then there are just a few simple instructions.

Prepare the pan: Preheat your oven to 350°F and grease your bundt pan very well. A thick coating of Crisco shortening is the most effective option for this. While I prefer to not use a lot of shortening, this is one case where it is quite important.

Make the batter: Sift or whisk the flours and starches, sugar, cinnamon, cinnamon, baking powder, baking soda, and salt together in a large mixing bowl. In another bowl, whisk together the apple cider, applesauce, vegetable oil, eggs, and vanilla extract. Then pour the wet mixture to the dry and whisk until just combined, being careful not to overmix the batter.

Bake the cake: Pour the batter into the greased bundt pan and bake for 45-50 minutes. A toothpick inserted near the center will come out nearly clean (perhaps with just a few small crumbs).

Cool and coat with cinnamon sugar. Remove the apple cider donut cake from the oven and cool in the bundt pan on a wire rack for 15 minutes. As it cools, mix the sugar and cinnamon together for the topping. While still warm, turn the cake out onto a plate. Use a pastry brush to coat the cake with melted butter, then sprinkle with cinnamon sugar. Serve warm or at room temperature.

How to Keep Your Gluten Free Bundt Cake from Sticking

For a regular bundt cake, the recommendation is always to spray the pan with one of the special non-stick sprays meant for baking that have flour in them. Obviously, if you are gluten-free you can’t do that. So an alternative recommendation is to butter and flour the pan. But I have not found gluten-free flours to work as well for this as standard all-purpose flour.

And unlike making a layer cake like Gluten Free Strawberries and Cream Cake or a sponge cake for Flourless Chocolate Peanut Butter Cake Roll, parchment paper isn’t really an option in a bundt pan.

Therefore, I actually find that good old Crisco shortening tends to be the most effective choice for greasing a bundt pan when making a gluten-free bundt cake. Yes, shortening. I don’t love to use a lot of it either, but I swear it’s the thing that works.

Your best bet is to use your fingers or a paper towel and really work the shortening into the crevices. One option is to try coating it in sugar, but I did not try that here so I can’t confirm it will work for this cake.

Then after the donut cake comes out of the oven, let it cool in the pan on the rack for 15 to 20 minutes before turning it out. While you don’t want it to be so hot that it crumbles, but you also want to let it cool completely so that the shortening firms up and makes it stick.

If you turn the pan over and find that it doesn’t slide out easily, give it a few more minutes. You can also help it along by using a small offset spatula to loosen up if you have a couple of spots that seem to be sticking just a bit. But don’t go too crazy or you’ll just make the cake crumbly and messy.

This cake keeps for a few days at room temperature. To extend the life a couple of extra days, you can put it in the fridge. This may cause it to dry out just a bit. It’s nothing a dollop of whipped cream can’t fix.

Can I Freeze It?

This bundt cake also freezes well. I’d just recommend freezing before you add the topping and letting it thaw slowly. First, start thawing it in the fridge till it is no longer frozen solid. Then bring it to room temperature before putting on the melted butter and cinnamon sugar.

Donut cake is obviously perfect for dessert, but it’s great for breakfast or brunch too. Have a slice with a mug of hot apple cider or a pumpkin spice latte. You’ll definitely enjoy it after a day of pumpkin picking or other fun fall activities. It is the perfect way to end a crisp autumn day.

Serve it for Thanksgiving. Enjoy it instead of pie with some of these alternative turkey-day desserts:

BUNDT PAN: I like to make this cake in the classic bundt cake pan, but you can certainly get one of the fancy ones. You’ll want to make sure it is a 10- to 12-cup bundt pan. 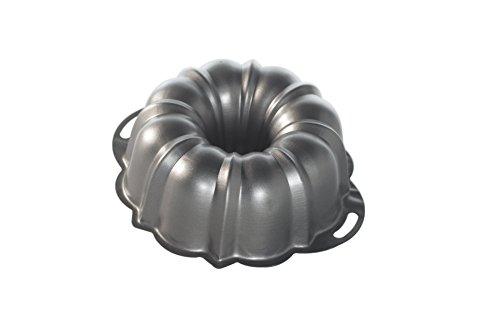 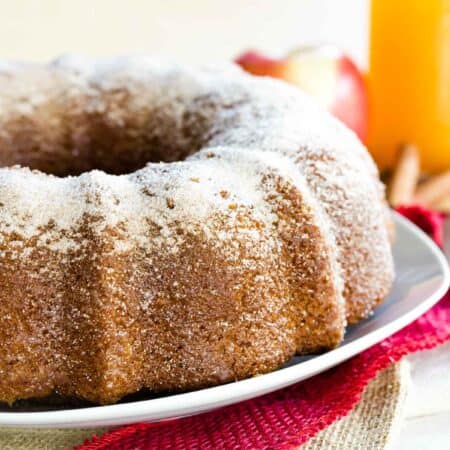 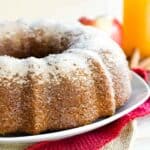