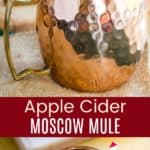 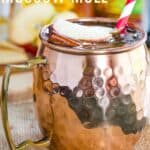 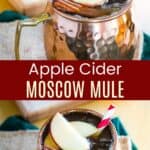 Apple Cider Moscow Mule is spiced up with Fireball whiskey and dark rum for the perfect fall cocktail recipe you are sure to love. Break out your copper mugs for the combination of the flavor of fresh apples and cinnamon with ginger beer in a refreshing drink that goes down smooth and easy on a crisp autumn evening.

I love fall. It is seriously my favorite season and it always has been. And I don’t know if it’s living in Maryland versus living in New Jersey or if it’s global warming or whatever, but I feel like fall perfection lasts about a minute. Into September we had day after day of temperatures in the upper 80s and 90s with enough humidity to make my hair puff out in all directions. My kids were sweating their butts off at soccer one week. Then they canceled soccer for rain the next. And the week after that we were bundled up in coats and gloves trying to hold onto our hats in 40 miles per hour wind gusts.

So I am going to soak up every bit of fall in those fleeting days of autumn perfection.

The crisp air, the leaves changing colors until they fall and crunch under your feet. All the aromas make me so happy, whether it’s the smell of those fallen leaves, a roast chicken in the oven on a cool evening, or even that ubiquitous pumpkin spice.

I love relaxing on the couch on a Friday night or Saturday afternoon watching football with the Hubby. Once it’s actually not ninety degrees I have to get myself to a pumpkin patch. And my house has the same old boring minimalist decor until October 1st. Then I break out the gilded pumpkins, the terra cotta pumpkins, the ceramic pumpkins, and of course some real pumpkins on the porch.

And don’t get me started on the food. You can have all of your peppermint and eggnog for the holidays. I’ll keep my butternut squash soup on a relaxing evening, Best chili ever while watching football, or a crustless pumpkin pie pretty much anytime.

And after a day of apple picking, I wouldn’t mind sipping on one of these apple cider cocktails…

An autumn twist on the traditional Moscow Mule, this fall cocktail recipe adds apple flavor and cinnamon spice to the usual ginger beer for a spiced but smooth drink. You’ll enjoy sipping on one out of a chilled copper mug while watching football, sitting around a fire, or even with your Thanksgiving dinner. Cinnamon and ginger will warm you from the inside, while the crisp apple flavor keeps it refreshing.

What is a Moscow Mule cocktail?

A Moscow Mule is traditionally the combination of ginger beer, vodka, and lime juice mixed together over ice cubes. Or swap out the vodka for Dark Rum to make a Dark and Stormy. The popularity of Moscow Mule cocktail in recent years have given rise to new variations on the classic, such as Jalapeno Moscow Mules or a Pina Colada Mule.

How do you make a Spiced Apple Cider Moscow Mule cocktail?

Is it even a Moscow Mule if you don’t serve it in a copper mug? Of course, not! OK, fine, you can use any glass you have, but copper mugs have traditionally be used because they keep the drinks cool and make the carbonation even more fizzy and refreshing.

Plus they look gorgeous, so I definitely recommend picking up a set of copper mugs so you can make these or any of your favorite mule cocktails.

First, I will always recommend that you should read ingredient labels. Sometimes different brands will add a gluten-containing ingredient or produce it in an area where they may be cross-contamination. This can happen even for items that are typically gluten free.

Ginger beer is typically gluten free. Apple cider also does not contain gluten, nor does dark rum, as it is made from sugar cane.

Fireball Whisky, and whiskey or bourbon, in general, does lead to some confusion about whether it contains gluten.

While whiskey is made from fermenting gluten-containing grains, typically the distillation process leaves alcohol that has non-detectable levels of gluten. However, some people are sensitive enough that this can pose a problem. So you should consult a medical professional before drinking a whiskey cocktail if you have celiac disease or a severe allergy or intolerance.

Since Fireball is a cinnamon-infused whiskey, it would have the same concerns and regular whiskey. Therefore, if you need a gluten free cocktail, there are some alternatives when you make this Apple Cider Moscow Mule recipe.

What can I substitute for Fireball?

More recipes to make with apple cider or apple juice 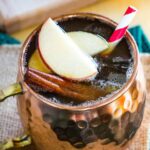