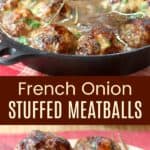 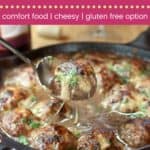 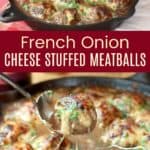 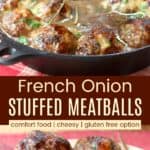 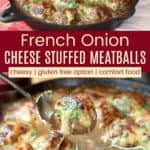 French Onion Cheese Stuffed Meatballs has everything you love about the classic French Onion Soup Au Gratin recipe in a hearty meal to satisfy any appetite. Mozzarella stuffed meatballs are browned and simmered in a rich sauce loaded with caramelized onions. Then, of course, they are topped with more ooey gooey cheese! And you can easily make them gluten free with no breadcrumbs and a simple swap! 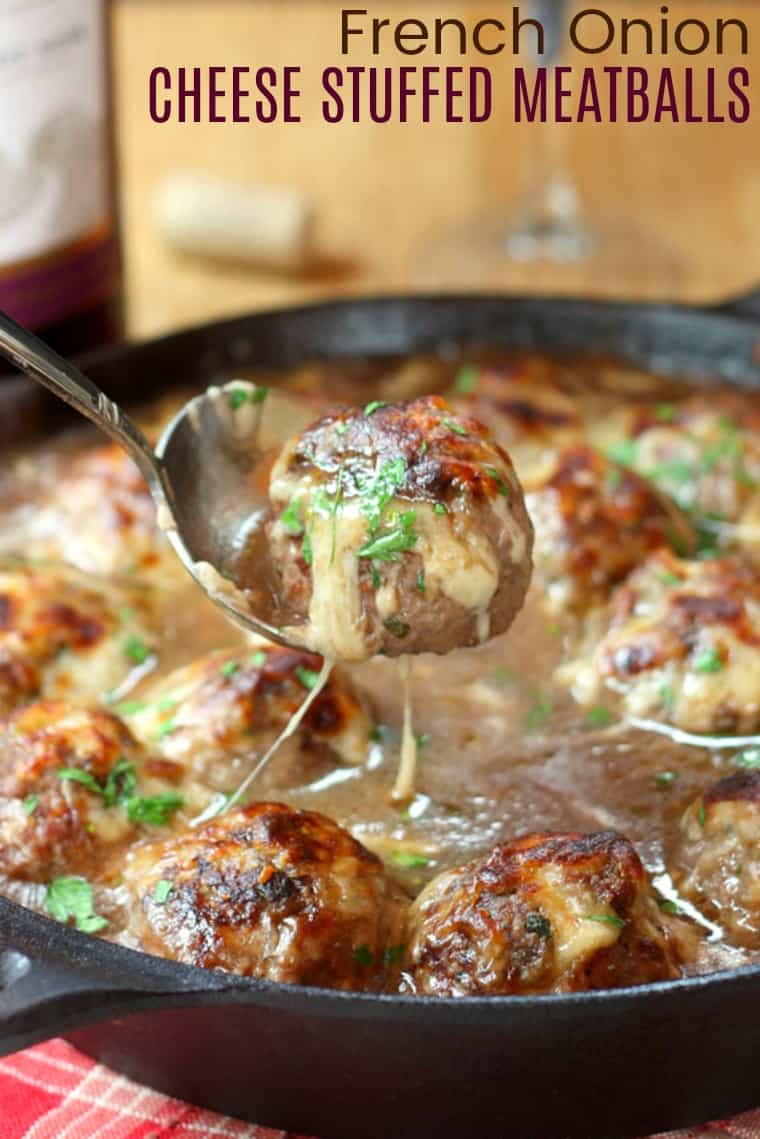 My parents got divorced when I was five years old. Strangely, most of my food memories are of the snacks and treats that I only had when I was with dad. Cheese Doodles and Chips Ahoy and Chocolate Pudding Pie and S’Mores. I think many little kids of divorced parents get spoiled a bit when they go visit the parent they don’t live with, and I was no exception.

But I know my dad fed me meals, too. The funny thing is, only two stand out in my mind. One is hot dogs, “Campfire” Potatoes, and corn on the cob when we spent summer evenings around the fire pit in his backyard. The other was our cold-weather favorite –  grilled cheese and French Onion Soup au Gratin. Because, you know, can you really have too much bread and cheese in one meal? I think not.

What is French Onion Soup?

French Onion Soup is a classic soup recipe that originated in France, where it is known as soupe à l’oignon. It consists of onions that are slowly caramelized and then simmered in broth or stock, typically a meat stock like beef. To turn it into the ultimate French Onion Soup Au Gratin, the soup was ladled into a bowl and topped with toasted bread or croutons and cheese, most often Gruyere cheese. It was then broiled until the cheese was melty, golden brown, and bubbly.

My dad might have had a simpler way to make it, but it was still incredible.

French Onion Soup (albeit from a can) was gently simmered until hot and poured into crocks. He topped it toast and plenty of mozzarella cheese (not traditional, but that’s how Dad made it), and put under the broiler until it bubbled and browned.

I eagerly awaited those crocks being removed from the oven and placed on the table so that I could pierce my spoon through the gooey layers. I would scoop up a perfect bite with some of each component, drawing it towards my open mouth, thin strands of cheese slowly stretching their way from the bowl until I pursed my lips around the spoon and broke them off, sighing with delight as the aromas and flavors enveloped me in warmth and comfort and love.

Sadly I have a family that doesn’t love soup.

So taking those same flavors from my childhood favorite and turning it into a hearty, satisfying, comfort food dinner that could satisfy even the biggest appetites (trust me, I live with three of them) was really the only option. I might have a bad habit of eating just one more than I really should! They are that good. 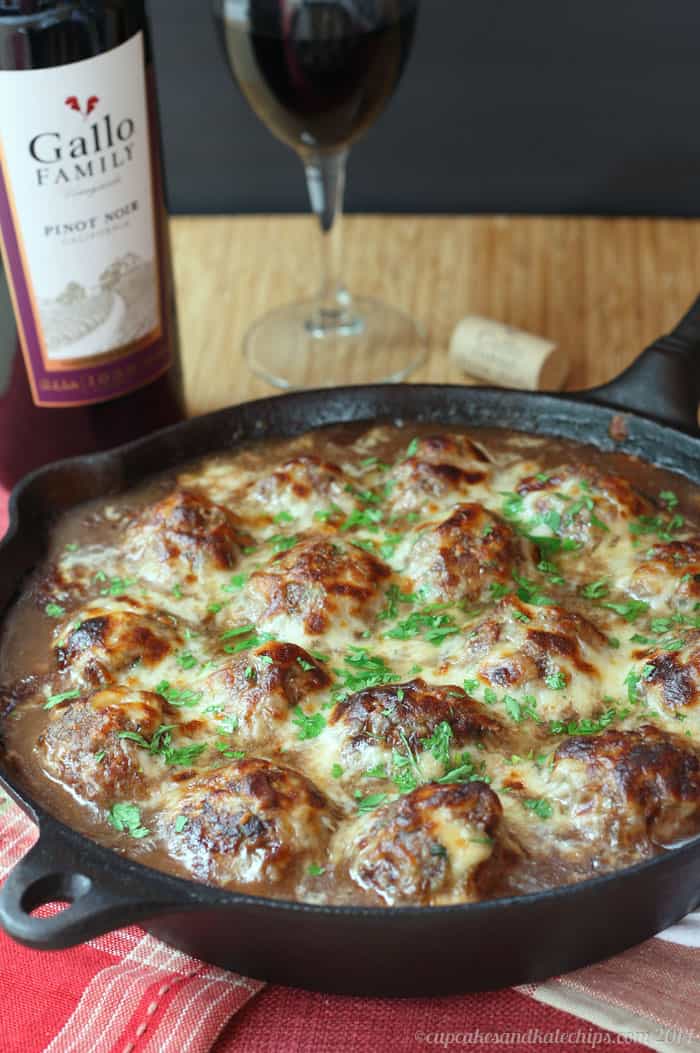 You’ll start by caramelizing onions with Pinot Noir (though any red wine would work), and stuffing the onions, along with a cube of mozzarella cheese, inside the meatballs. Then brown the meatballs in a skillet.

While most mozzarella stuffed meatballs are simmered in tomato sauce, these are smothered in a simple, rich sauce made of beef stock and more red wine. It is almost a gravy, but not quite so thick and heavy. The cheese stuffed meatballs are then baked in the oven until they were cooked through and the cheese became a pocket of melty deliciousness.

And of course, you can’t leave off the au Gratin, so the entire pan gets covered in more mozzarella and placed under the broiler to get that perfectly browned cap of toasty cheese.

What do you need to make French Onion Cheese Stuffed Meatballs?

For the caramelized onions:

You’ll also need a nice, large skillet that is safe to put in the oven and under the broiler. I like using a 10-inch cast iron skillet as it helps with getting the meatballs nicely browned on the outside, and it is oven- and broiler-safe.

If you do not have an oven-safe skillet, transfer the meatballs to a casserole dish before adding the sauce and baking in the oven.

Other than that, everything you’ll need is pretty basic, such as measuring cups and spoons and a bowl. 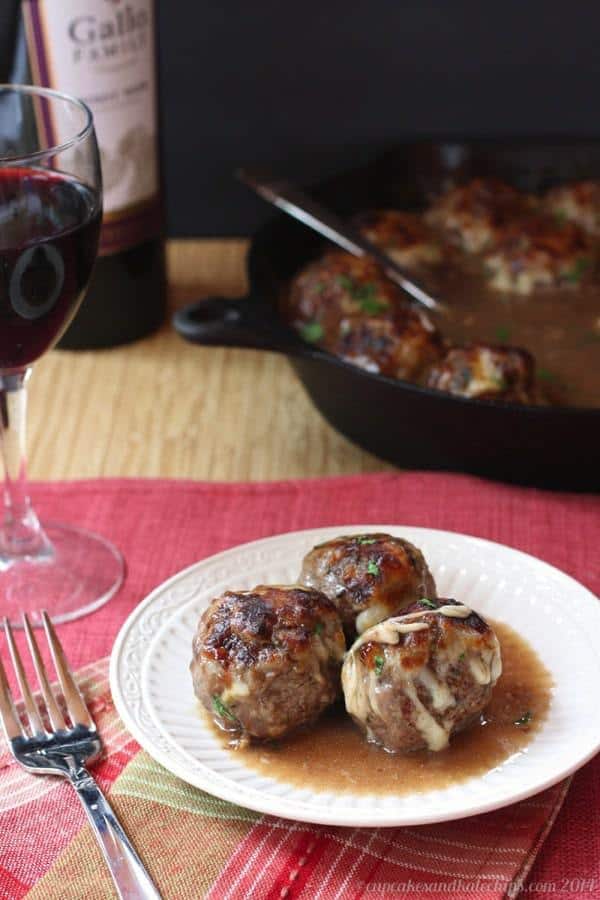 How to caramelize onions: 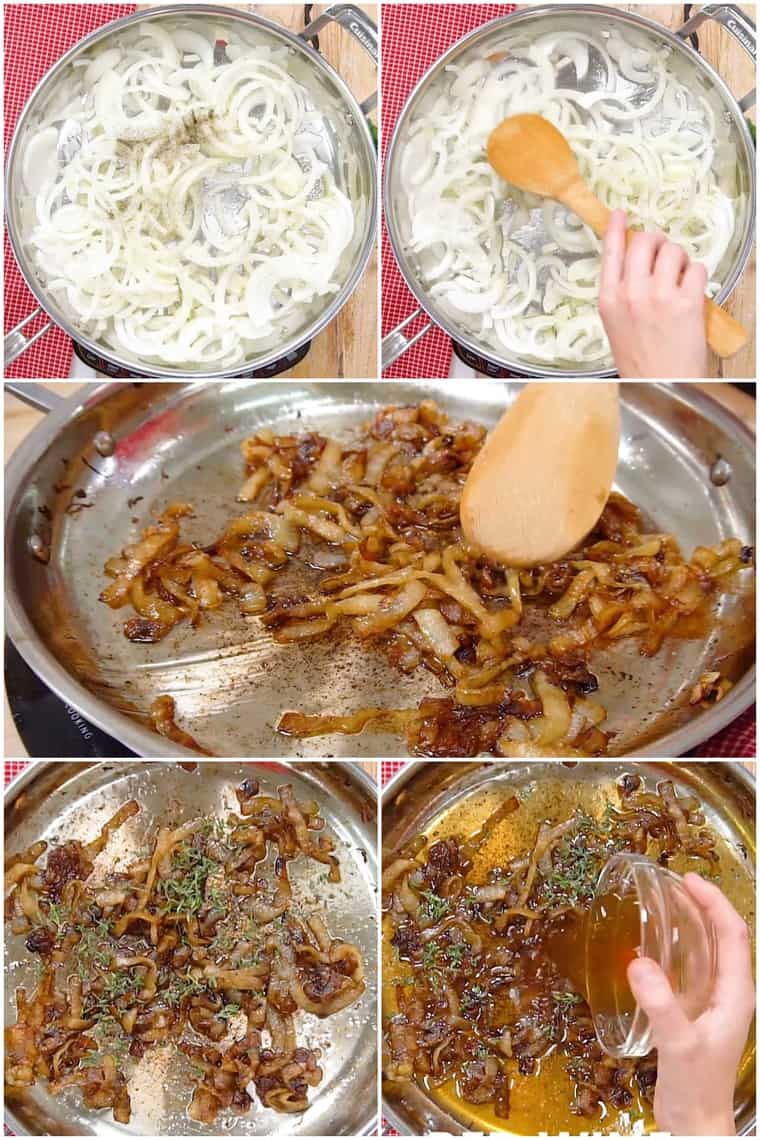 How to make cheese stuffed meatballs: 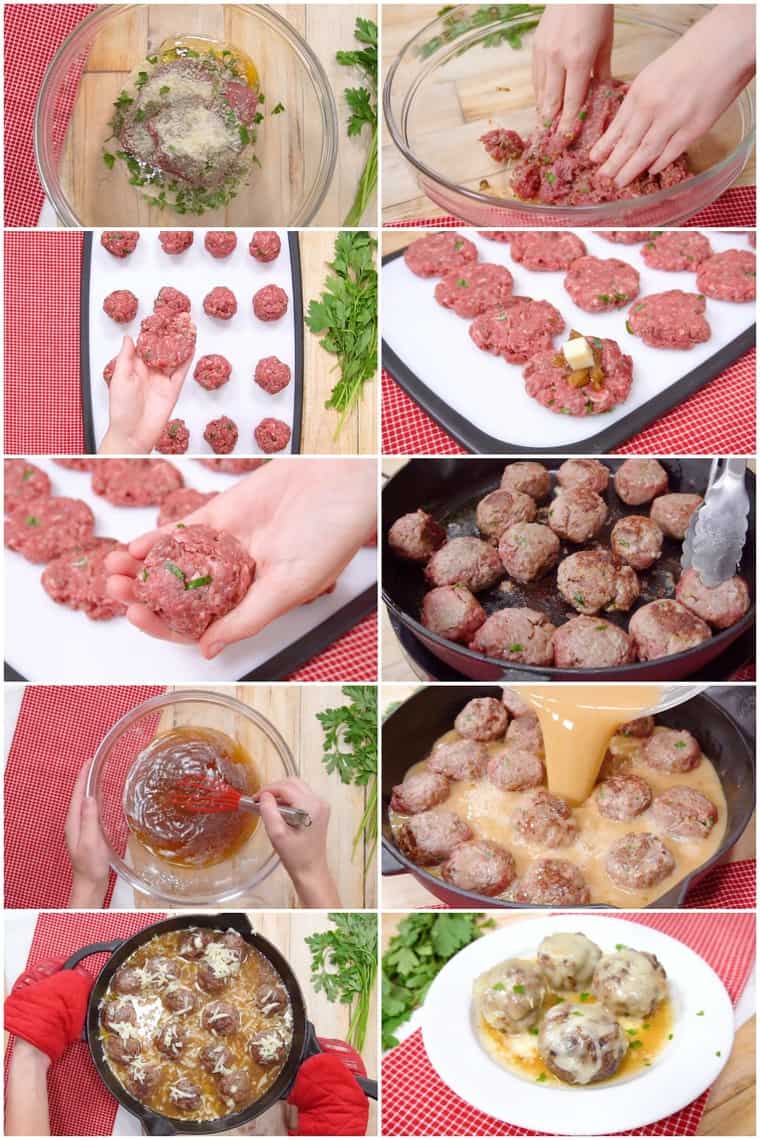 Can you freeze stuffed meatballs?

Yes, you can freeze any leftovers. Before eating, just thaw slowly in the refrigerator, and gently reheat in the oven or microwave, or even in a skillet on the stove. The texture of the cheese topping might be affected slightly, so you could also make extra and freeze the cooked meatballs and sauce before topping with cheese. 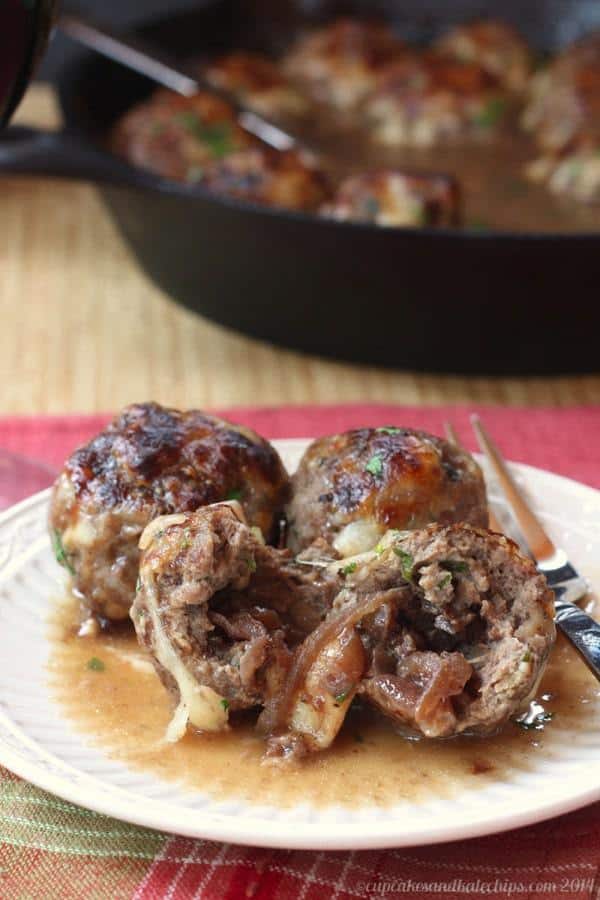 What should I serve with stuffed meatballs?

You can spoon them over egg noodles, rice, mashed potatoes, or spaghetti squash. Or try some of these side dish recipes: 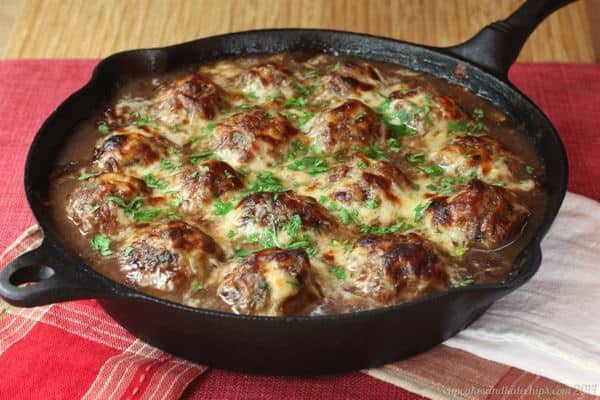 Stuffed with caramelized onions and mozzarella, these French Onion Meatballs are a hearty meal inspired by the classic au gratin soup recipe. And for the best part, they are covered with even more cheese and broiled until golden brown and bubbly. It’s a comfort food dinner recipe the entire family will enjoy. 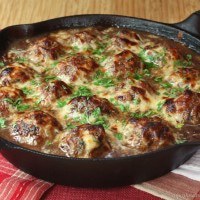 Stuffed with caramelized onions and mozzarella, these meatballs turn the classic French Onion Soup au Gratin into a heaty meal. And of course, they are covered with more cheese and broiled till golden brown and bubbly.
Prep: 20 mins
Cook: 1 hr 10 mins
Total: 1 hr 30 mins
Servings: 5
Print Rate
Prevent your screen from going dark 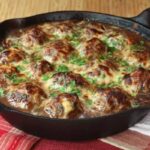