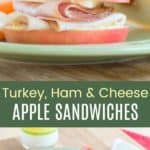 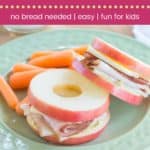 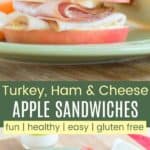 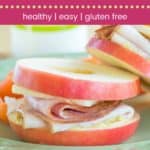 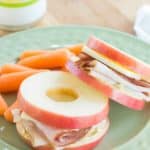 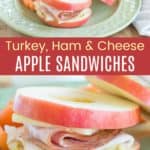 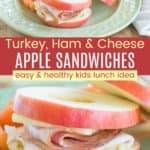 An Apple Sandwich without bread is a fun and healthy lunch idea, especially for kids. A tasty option whether someone took the last slice, you are looking for an easy gluten free sandwich, or want something different. And it’s so easy you don’t even really need a recipe. Just go breadless with a classic combination when you make Turkey, Ham and Cheese Apple Sandwiches.

For a long time, this blog was not just recipes but also a record of what was going on in my life. As the focus of my business has changed, readers’ expectations have changed, and demands of the Google gods have changed, so have my blog posts.

Now I really just focus on the background of the recipe, why I am convinced you should make it, and helpful information to ensure it’s easy and delicious.

But I would be remiss if I didn’t mention that, as I write this post, we are in the midst of one of the craziest times the world has ever seen. Let me just say I hope you are all well and leave it at that for now.

And one of the craziest side effects of current circumstances is the lack of, amongst other things, bread on the grocery store shelves.

I have been putting an Apple Sandwich in my kids’ lunches for ages. I’ve actually had these photos on my computer for about two years. Yet I never posted it.

It’s like I was waiting for this exact moment.

How to make a sandwich without bread

Sure, there are plenty of options, like rolls, wraps, and even English muffins. But if you want a wheat-free alternative and aren’t a fan of gluten free bread, then apple slices make perfect little sammies.

They are firm enough to hold in the fillings, but not to hard that you can’t chomp right into it. And the crisp, sweet apple is actually a great flavor and texture contrast to your basic deli meats and cheese, like turkey, ham and cheddar.

Kids love making and eating them. And while I am telling you about one of the most basic combinations, I do share some variations below. Or let your imagination and tastebuds be your guide.

Depending on the size of the apple, you can get two, or possibly three little apple sandwiches out of it, and you can always cut the rest into slices to snack on.

The “hardest” (if you will) part of making apple sandwiches is cutting and coring the apples. So here are a few options:

Stack up apple slices with your favorite deli meat and cheese for an easy, healthy, and tasty alternative to sandwiches without bread. A great option when you can’t get your hands on a loaf, or a breadless gluten free lunch idea. 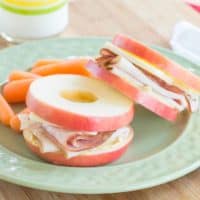 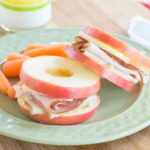