Disclosure: This post may contain affiliate links. Cupcakes & Kale Chips is a participant in the Amazon Services LLC Associates Program, an affiliate advertising program designed to provide a means for us to earn fees by linking to Amazon.com and affiliated sites.
11.9Kshares
Jump to Recipe Print Recipe

Chocolate mousse pie with a splash of Baileys Irish cream makes these single-serving mini pies a decadent gluten free St. Patrick’s Day boozy dessert! Perfect for Pi Day, too! They’re one of the best gluten-free no bake dessert recipes in my recipe box! 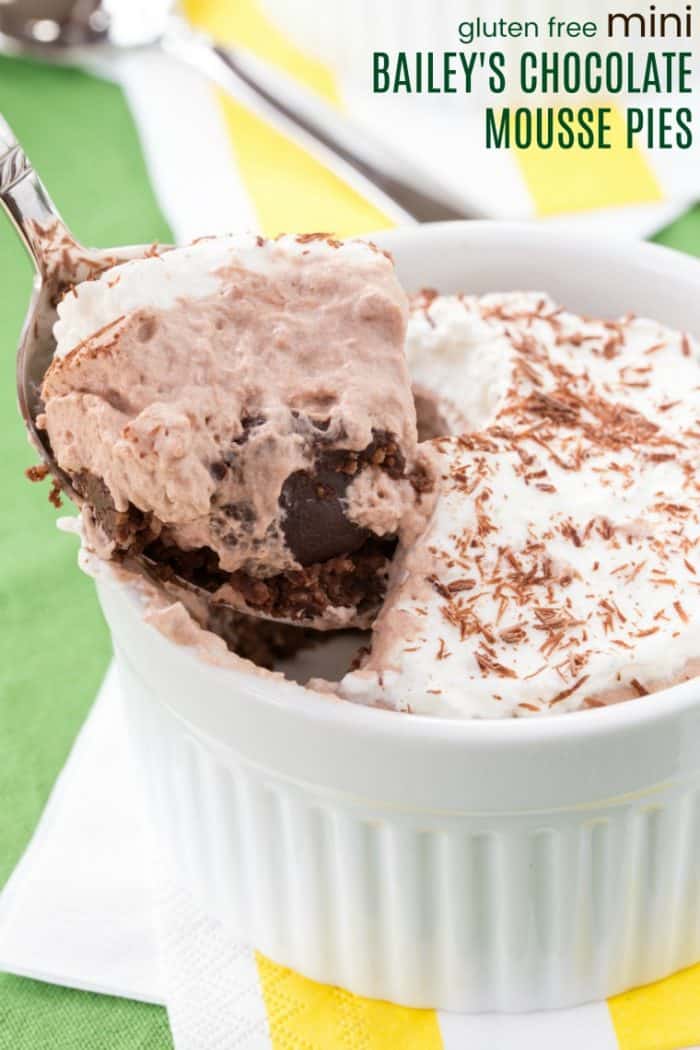 My five-year-old has the strangest taste in television. Well, strange for a five-year-old. He has stated that when he watches movies, he doesn’t want to watch cartoons anymore because they are fiction (I think he needs a better understanding of the difference between fiction versus non-fiction and animated versus live-action, but we’ll work on that).

He’ll sit for hours and watch nature or survival shows with Daddy. When he is begging to watch TV and I say that we aren’t going to put on any kids shows, he’ll say, “OK, then how about one of those DIY shows? Maybe Barnwood Builders is on.” Besides that, be might be almost as big a fan of Chip and Joanna as The Hubby and I.

And when he knows I’m going to cuddle on the couch with him, he’ll request Food Network. Honestly, I don’t think that’s just to placate Mommy. He actually likes it. When he was playing with his kitchen set recently, he insisted I record him on Snapchat while he told Guy Fieri (aka Mommy) all about the Crystal Soup Diner and then proceeded to detail how he makes Deep Fried Crystal Soup with Chicken Broth. There were power tools involved.

Then there’s Chopped. I think it’s a sign that we have watched it a few too many times when on nights he especially enjoys his dinner, he tells me that I get to move on to the Dessert Round. And then he’ll start naming random food items in our fridge and pantry that he wants to incorporate into his snack.

I’m not sure if I should be flattered or offended.

I guess I’m just glad he hasn’t requested booze as one of the secret basket ingredients.

Though The Bug is a bit precocious with his television habits, and his palate, he will not get one single bite of gluten free Baileys Chocolate Mousse Pie. 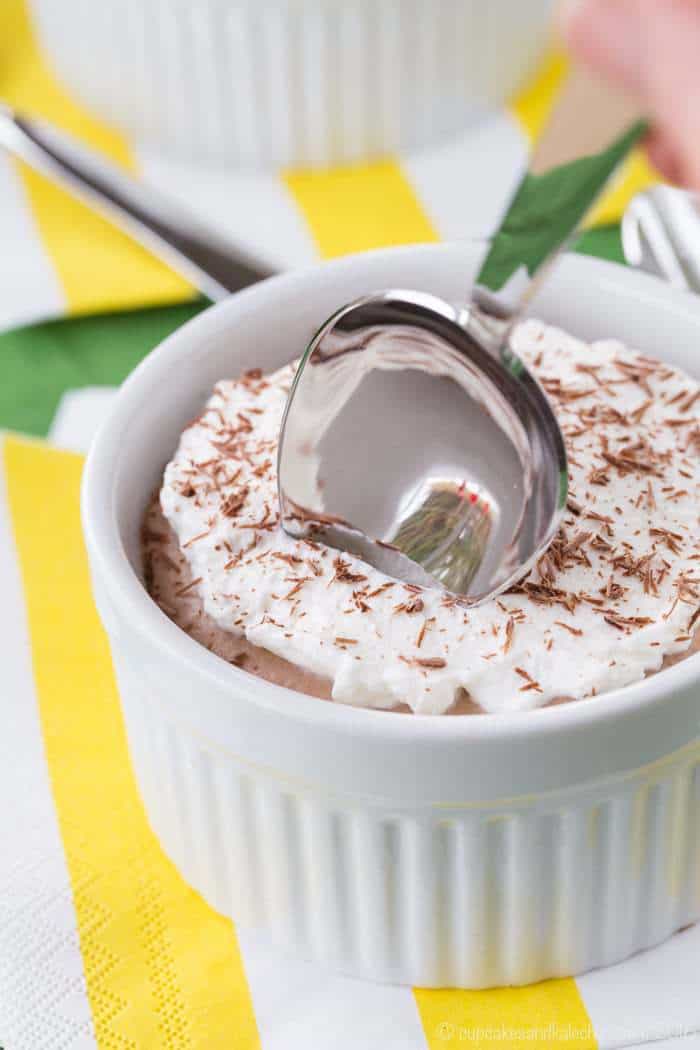 But after enjoying more than my fair share (over the course of a week, not in one day!), I will tell you they are the perfect combination of rich and decadent with light and fluffy. I’ll be honest, though, when I say “light”, I am only talking about the texture of the mousse, not the calorie content.

This is a special occasion dessert, but it is totally worth the indulgence. You start with a no-bake chocolaty crust made from almond meal. Top this with a simplified bit of my Five Minute Bailey’s Fudge Sauce. Cover that all up with a thick layer of heavenly Irish Cream chocolate mousse, then whipped cream and shaved chocolate and you have a dessert worthy of any celebration, from Pi Day to St. Patrick’s Day, or even a dinner party where you want to impress your guests. But the best part is that even though there are a few different layers to make, they are all super easy! 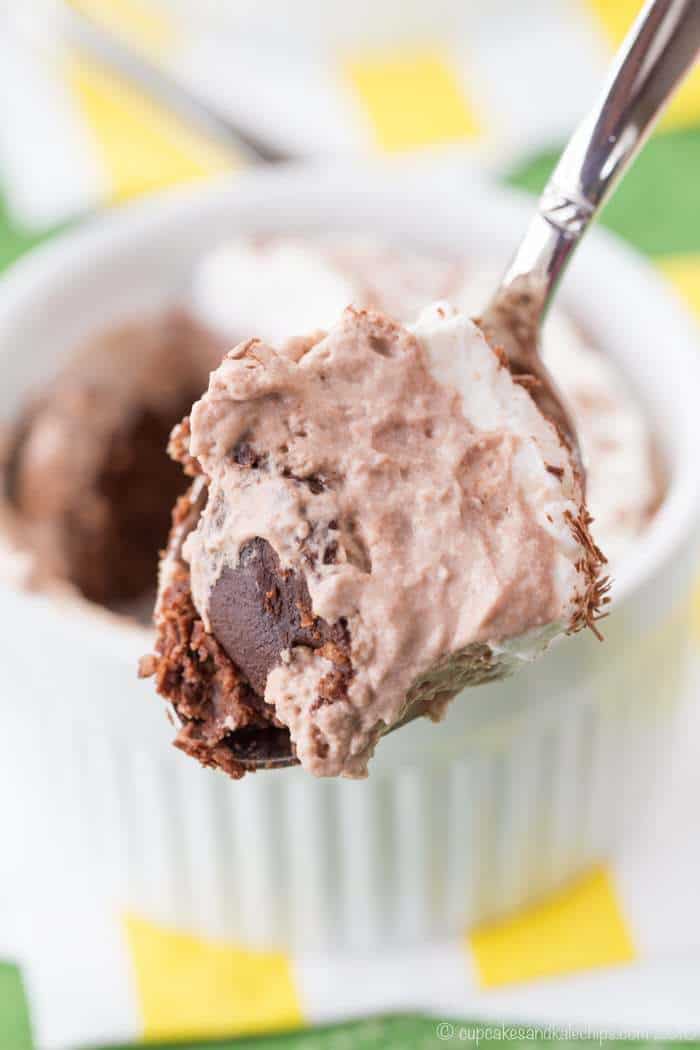 How do you make Mini Baileys Chocolate Mousse Pie?

Irish cream and all whiskey-based alcohols are made from gluten-containing grains. However, the distillation process effectively separates the alcohol from the gluten. However, in the case of Irish cream, there is the question of other ingredients. Bailey’s claims they don’t use any gluten-containing ingredients, but they are not qualified to make “medical recommendations”.

Carolan’s claims to be gluten free. I am not a medical professional, so this is only based on my research, and if you have a severe allergy, you should consult your doctor. But I did want to give you this information because I am often asked. Also, I have heard that Irish cream non-dairy coffee creamers can be substituted in order to achieve the same flavor without any risk of gluten. And also for if you want to avoid alcohol.

I have not tried using it in these gluten free mini pies, so if you do, please let me know. 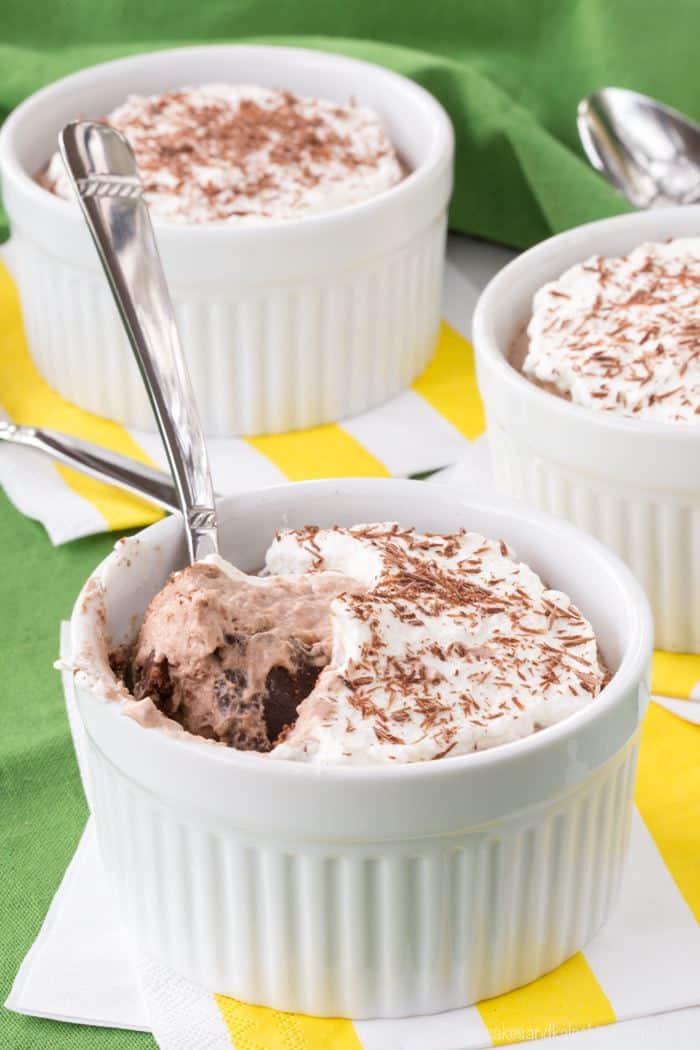 Here are some other boozy dessert recipes to make for St. Patrick’s Day! 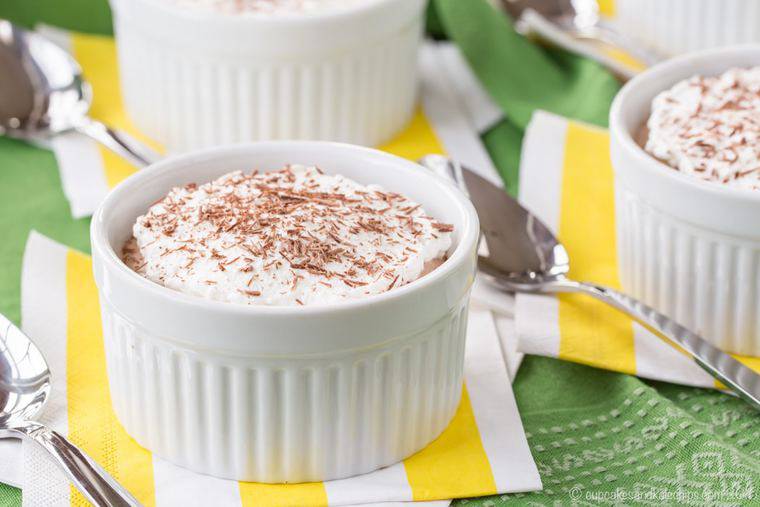 What do you need to make mini chocolate mousse pies?

RAMEKINS – These 4 oz. ramekins are the perfect size to make four individual pies. They are pretty good sized, so you could make six or eight in smaller ramekins. Or you can make mini parfaits in these little dessert cups that I use often, like for these Maple Blueberry Mini Cheesecake Parfaits.

These gluten free decadent mini pies have an Irish Cream fudge bottom and light and fluffy chocolate mousse. This simple boozy dessert recipe is perfect for St. Patrick’s Day or any special occasion. 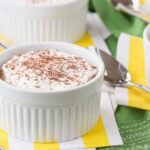 For the Irish Cream fudge:

For the whipped cream

For the Irish Cream fudge: 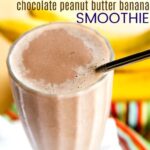 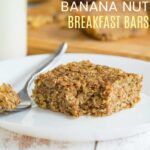 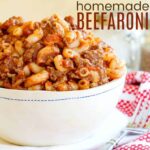 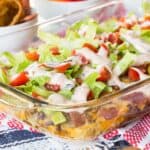