Disclosure: This post may contain affiliate links. Cupcakes & Kale Chips is a participant in the Amazon Services LLC Associates Program, an affiliate advertising program designed to provide a means for us to earn fees by linking to Amazon.com and affiliated sites.
Jump to Recipe Print Recipe 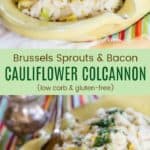 Cauliflower colcannon is a low carb and veggie-filled twist on the classic Irish dish. The traditional colcannon recipe typically consists of mashed potatoes with kale or cabbage, but this one uses mashed cauliflower instead, and it’s flavored with the delicious pairing of bacon and Brussels sprouts. Celebrate a gluten-free St. Patrick’s Day by adding Brussels Sprouts Bacon Cauliflower Colcannon to your menu. 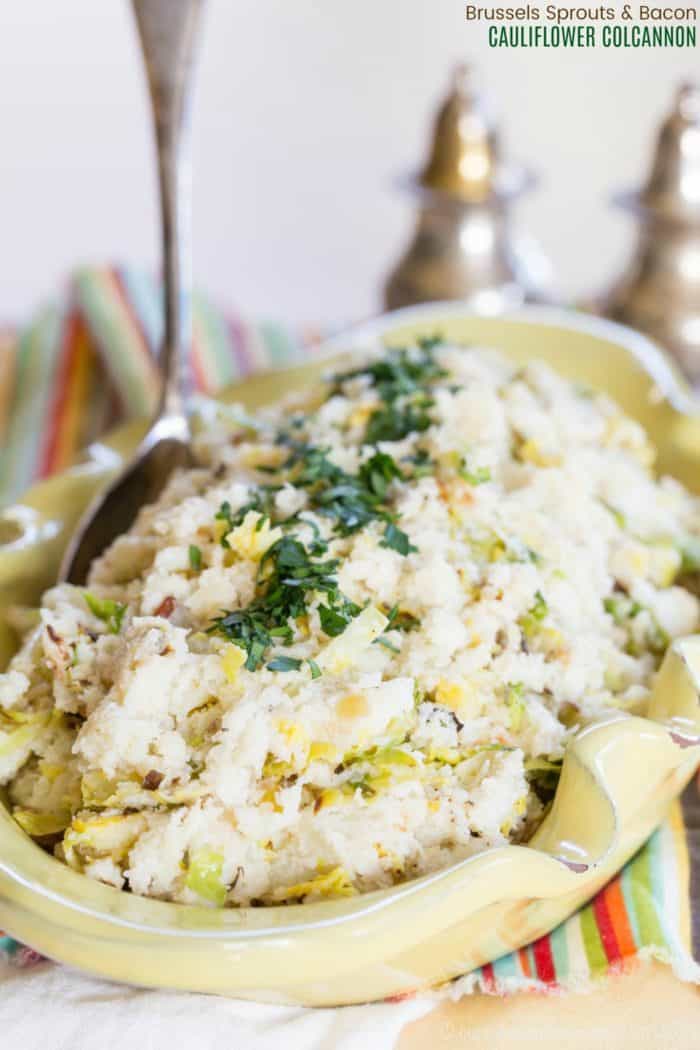 I know I’m going to get in trouble for this one. I mean, every time I share this Shepherd’s Pie Loaded Baked Potatoes recipe or someone comes across the version of Easy Shepherd’s Pie that I make, I’m reminded that shepherds raise lambs, not cows, so my inclusion of beef in shepherd’s pie is all kinds of wrong. It’s technically “cottage pie”. I don’t know about you, but I’ve never seen cattle hanging out in a cottage, so I couldn’t tell you the origin of that name. I’m sure if the rancher needed a hand, he’d be more likely to get the shepherd to keep an eye on his cattle than if he just wandered up to some unsuspecting family in a random little cottage and said, “Hey, here, watch my cows.”

And I don’t like lamb, so there you have it.

It’s a hot button, for sure, though. And now what did I do? I made colcannon. Except I made low carb colcannon. Yes, you guys, I made… 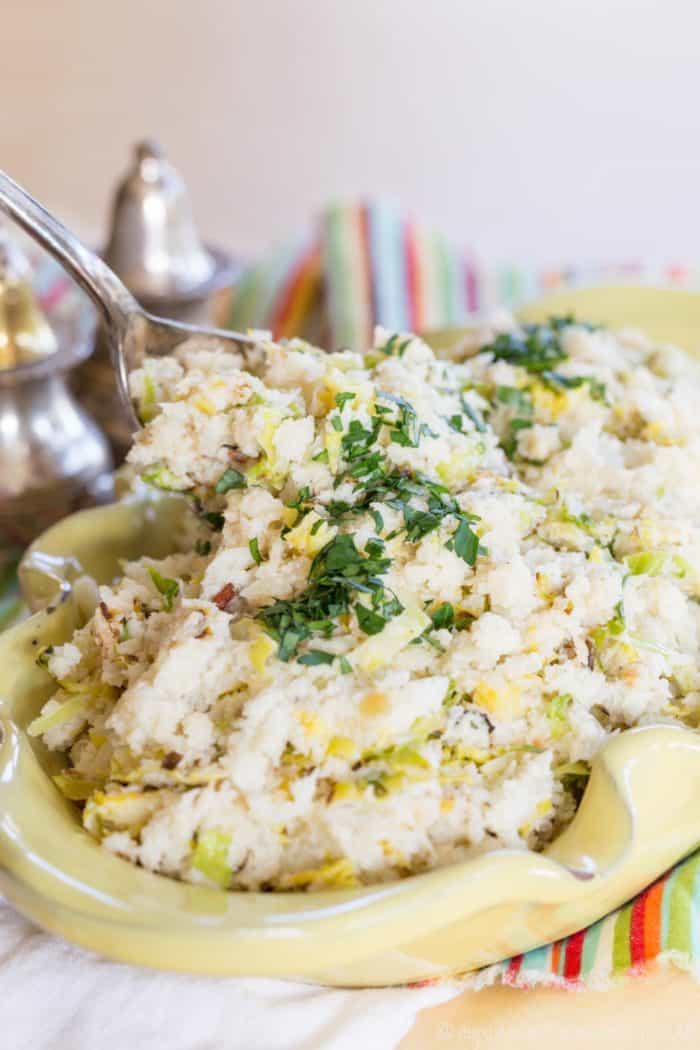 Now I’ve done it, because not only did I pass the potatoes, but I cut out the cabbage too. Well, not completely. I really just replaced them with wee bitty little cabbages (also known as Brussels sprouts), which I just so happened to cook with some bacon before stirring them into the mashed cauliflower. And then I might have proceeded to eat the entire batch myself over the next couple of days because my crazy husband and kids are anti-Brussels sprouts. Too bad for them, because it was incredibly delicious. I didn’t make this batch as smooth as my Horseradish Cheddar Whipped Cauliflower, but I love the more homestyle texture, and the the flavor combination of the salty, smoky bacon with the cauliflower made creamy with just a bit of butter and Greek yogurt was absolutely perfect.

I’m totally going to be enjoying it with my Easy Slow Cooker Corned Beef for St. Patrick’s Day this year! I do use hard cider in that, so those that are on the keto diet might not be able to make that exact recipe, but it is a delicious gluten-free alternative to cooking it in Guinness. But for a low carb version, try this Pressure Cooker Corned Beef with Creamy Horseradish Sauce from Kalyn’s Kitchen. Serve it alongside Low Carb Irish Soda Bread Muffins from Sugar Free Mom. Then finish off the meal with Low Carb Irish Cream Brownies from All Day I Dream About Food.

Have I convinced you to make Brussels Sprouts Bacon Cauliflower Colcannon yet? 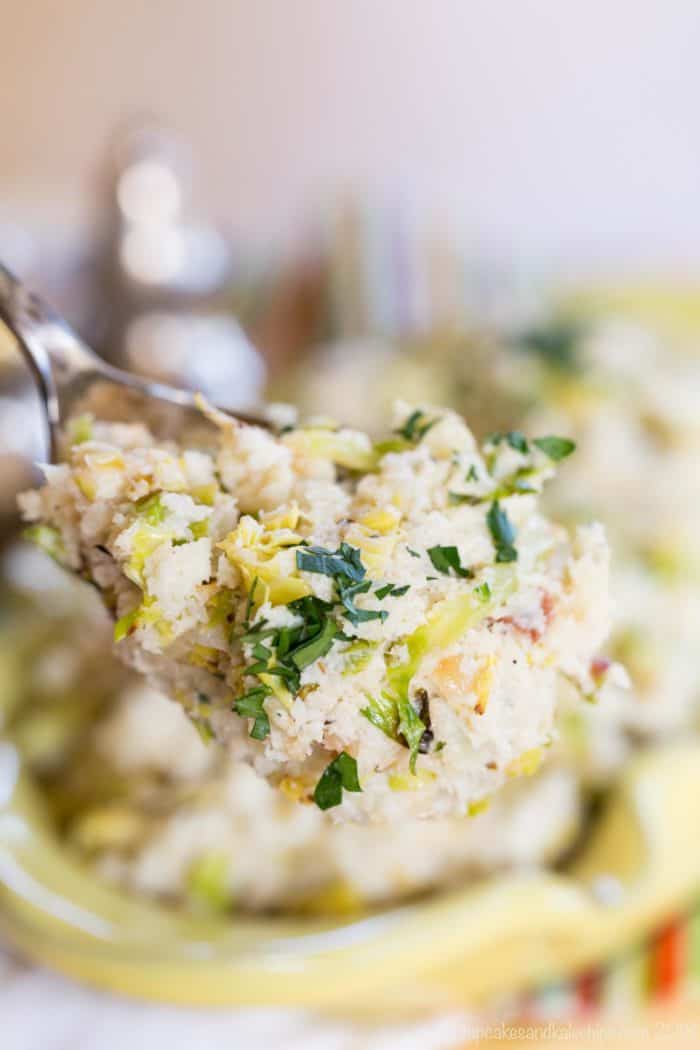 Yes, now you probably want to know how to make Mashed Cauliflower Colcannon with Bacon and Brussels Sprouts. 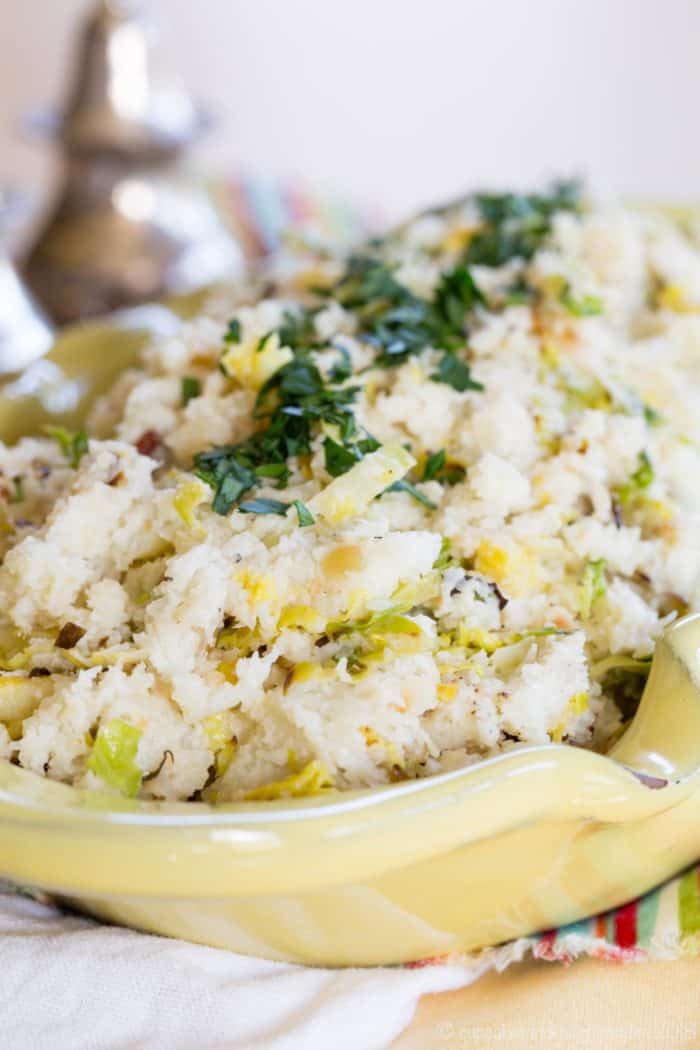 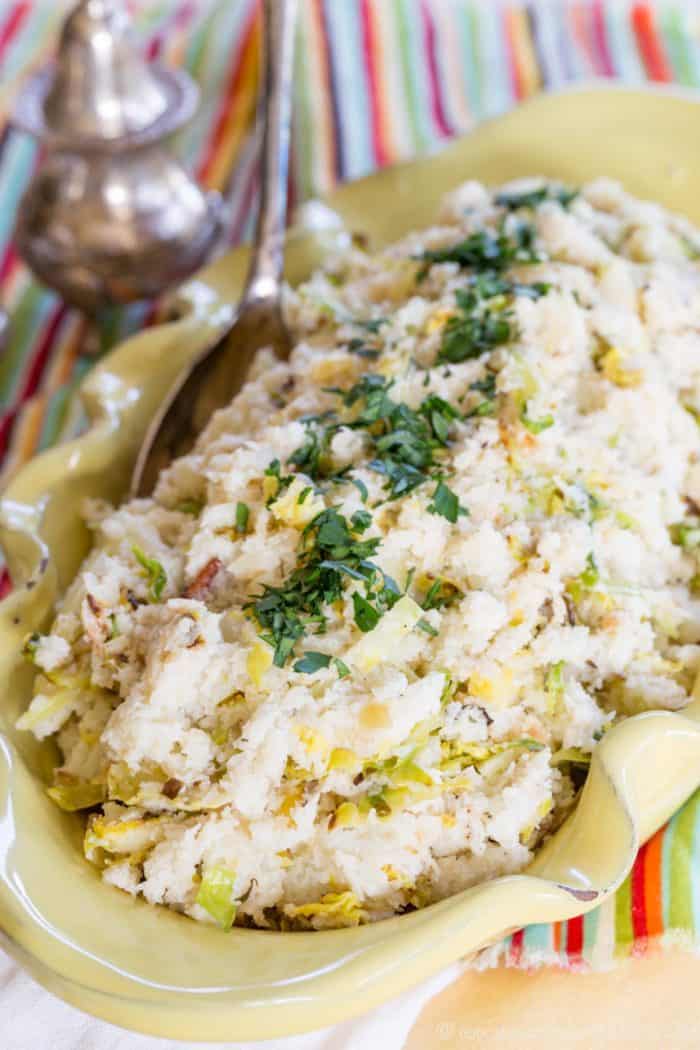 Want to chat with fellow foodies? Join the No-Fuss Food and Fun group on Facebook to share recipes and ideas, ask and answer questions, and tell everyone what you’re making for dinner! Request to join HERE.

For more no-fuss wholesome meals and snacks with a sprinkle of sweet treats, keep up on…

Or sign up to have Weekly Sprinkles from Cupcakes & Kale Chips delivered straight to your Inbox! 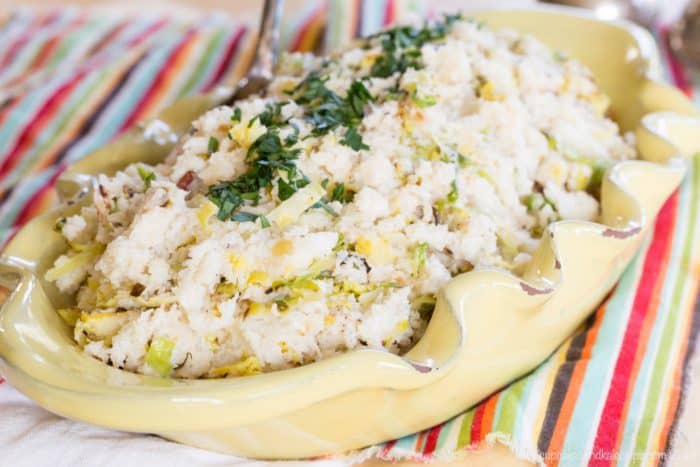 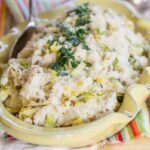 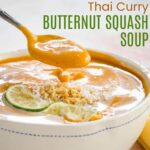 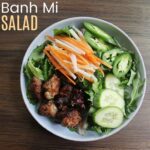 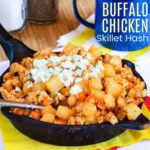 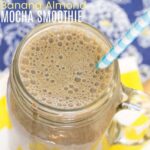