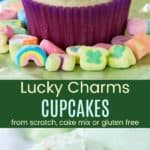 Lucky Charms Cupcakes are a fun St. Patrick’s Day cupcake recipe or for any day you want a colorful treat made with your favorite breakfast cereal. This dessert recipe will make kids of all ages happy, and there are from scratch and cake mix options. Or check out the directions to make gluten free cupcakes as part of a gluten free St. Patrick’s Day. And you can’t forget the simple marshmallow-studded buttercream frosting on top. 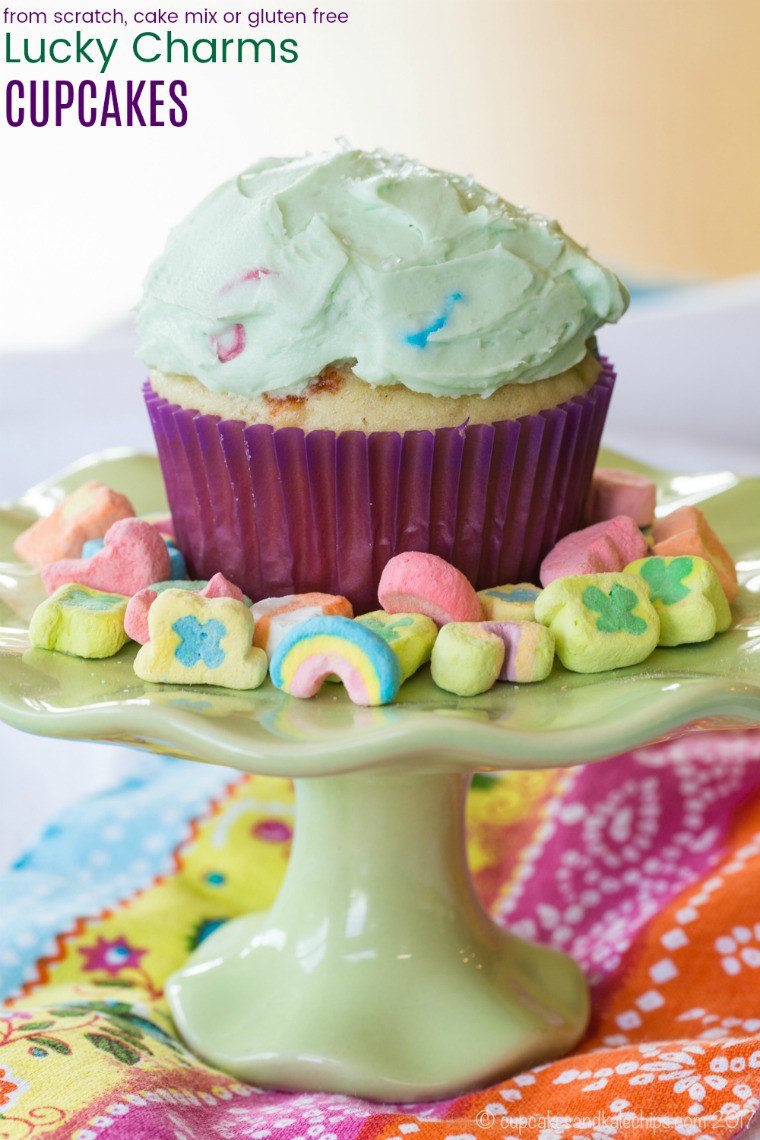 Paraphrasing the Grinch, I got an idea. An awful idea. A wonderful, awful idea. I have three words for you.

Yes, I said it. Somehow when thinking about a St. Patrick’s Day dessert, I came up with cupcakes based on an American breakfast cereal. How Irish! And how strange of me since usually I’m giving my kids plain Cheerios for breakfast, or adding cereal to healthier snacks like Cereal and Yogurt Stuffed Apples.

So let me tell you a little story. As a kid, the rule was that I could not buy any cereal that had marshmallows in it. Mind you, I could have all of the sugar-coated cereal I wanted I wanted, and our house was never short on M&M’s or Chips Ahoy! cookies. And she does advocate an occasional dinner of ice cream. But marshmallows in my breakfast cereal? NO WAY! So what did I do every time I slept over my cousin’s house? In the morning, I immediately bee-lined for the Lucky Charms or Franken-Berry or Boo-Berry. Unfortunately, my cousin usually beat me to the toy surprise.

I am not sure if this recipe is in defiance of or homage to my mom marshmallow rules. But I just had to make Lucky Charms Cupcakes, and you do too! 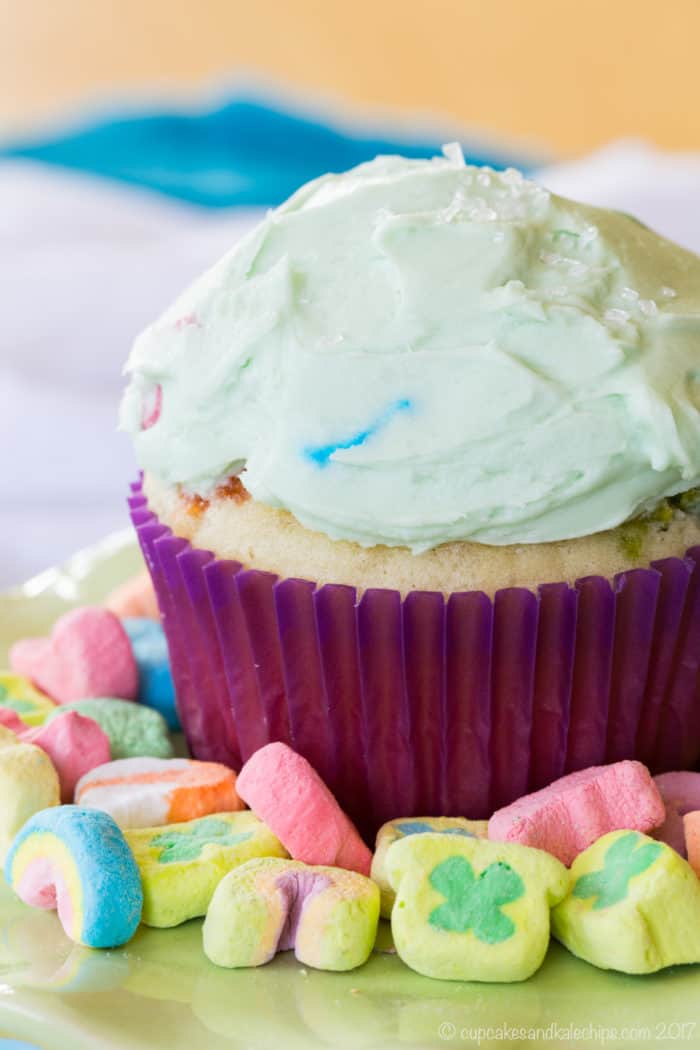 How to Make Lucky Charms Cupcakes

So as I thought about this some more, I knew I was going to go all Momofuku on these bad boys. I am talking about Cereal Milk! If you haven’t heard of it, Momofuku Milk Bar is a restaurant/bakery in New York City, where they use “cereal milk” in some of their baked goods. So I had to try the idea out for myself. Because isn’t that one of the best parts of eating a bowl of sugary cereal – drinking all of the yummy, sweet milk at the end?!

From my early days of learning to bake from The Cake Mix Doctor, I will advocate for homemade buttercream frosting. It’s so simple and so worth it. And it’s super fun when you stir in Lucky Charms marshmallows. If you are big on piping frosting, pipe it on then top with marshmallows, but I like the little peek of color you get from folding them in, though that does make the frosting un-pipeable. Just dollop it on! 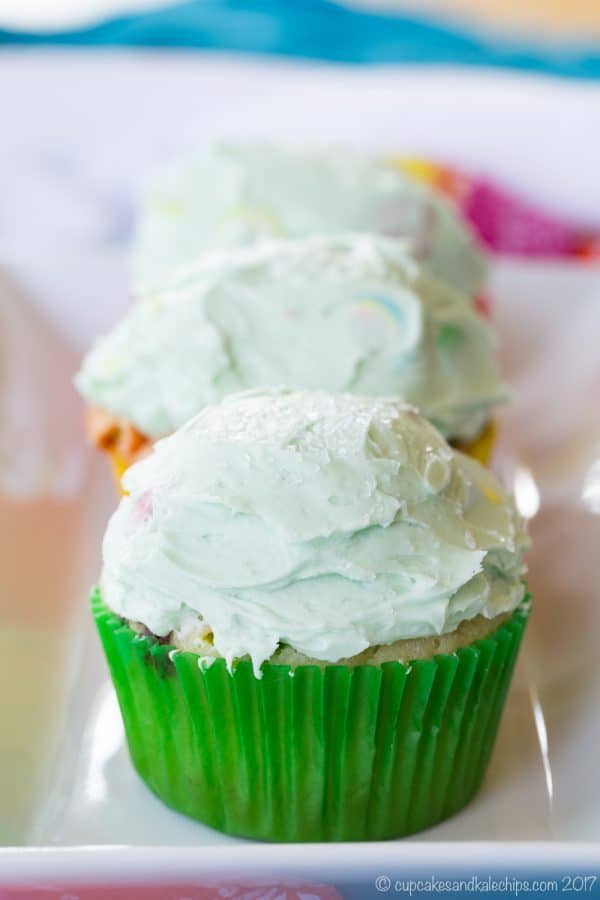 Can you make Lucky Charms Cupcakes with a cake mix?

Originally I only posted this recipe with the from scratch version. But over the years I’ve come to a realization after spending way too many hours making cupcakes from scratch – the kids you usually feed them to don’t notice and certainly don’t care whether you sifted flour and carefully combined wet and dry ingredients or just opened up a pouch.

So yes, you can use a cake mix. But whether you use the scratch cupcake recipe or the box mix (or even gluten free cake mix), you get a little extra cereal-licious flavor from the cereal milk. That means you’ll start the same way, by separating the marshmallows form the cereal and soaking the cereal in the milk. Then use the milk in place of the water in the cake mix.

Lucky Charms are a gluten free cereal. Therefore, if you use two boxes of gluten free cake mix, you can make 24 gluten free cupcakes using the Lucky Charms cereal milk and marshmallows. The buttercream is already gluten free, so you won’t need to make any changes there. 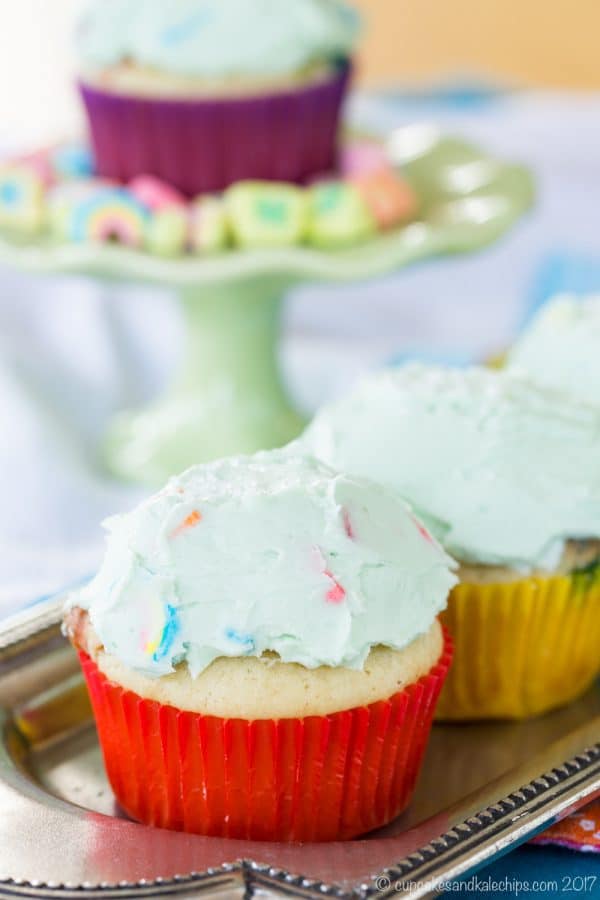 And you’ll love these 15 Rainbow Sweets and Treats That’ll Make Everyone Go Crazy!

What else can you make with Lucky Charms?

My friends have also made some Lucky Charms treats. A Lucky Charms Blizzard from Wishes and Dishes is a perfect way to cool off. Lucky Charms Marshmallow Treats from Brown-Eyed Baker are double the marshmallowy goodness. And then there’s No-Bake Lucky Charms Cheesecake from Spend with Pennies for a creamy, dreamy delight. 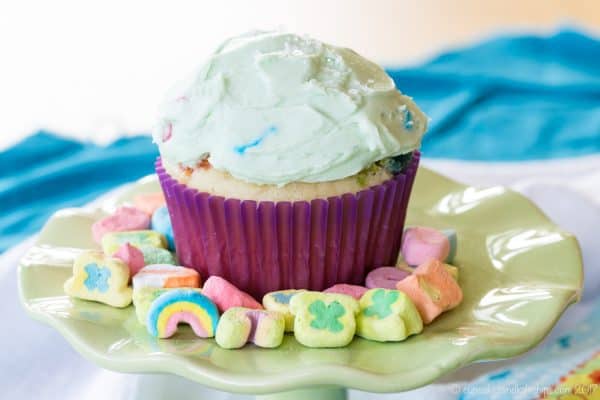 Can you buy Lucky Charms marshmallows?

Yes, this recipe does involve opening a box of Lucky Charms and picking out all of the marshmallows. But you can always soak the cereal and marshmallow combo in the milk to make the cereal milk, then just buy these from Amazon.

Everyone will go crazy for these colorful cupcakes. Flavored with Lucky Charms cereal milk, filled with marshmallows and covered in a marshmallow-studded buttercream, this is a fun sweet treat. Perfect for St. Patrick’s Day, a birthday party, or for the cereal lover in your life. And you can make them from scratch or using a regular or gluten free cake mix. 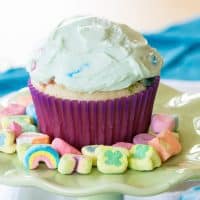 A fun and easy cupcake recipe made with a favorite breakfast cereal. These colorful treats are flavored with cereal milk and topped with a marshmallow-studded buttercream
Prep: 30 mins
Cook: 25 mins
Total: 55 mins
Servings: 24
Print Rate Pin Save Saved!
Prevent your screen from going dark 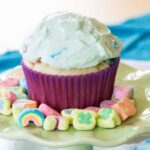 Here are the original photos of Lucky Charms Cupcakes! 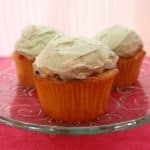 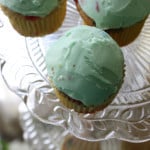