Mexican chocolate pudding oatmeal is like having dessert for breakfast! The Mexican spice makes it a great gluten-free Cinco de Mayo breakfast option.

I am clearly setting a bad example for my son. I mean this Mexican Chocolate Pudding (or Brownie) Oatmeal is what I eat for breakfast everyday! He has his bowl of fruit and plain yogurt with some nuts or ground flax seeds or chia seeds and watches me eat this. I’m a terrible mother. 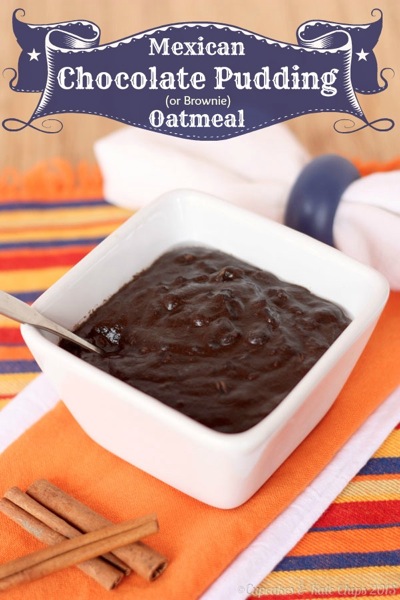 But believe it or not, this is healthy! Seriously! I mean, beating a dead horse, but many of you know the gestational diabetes saga, and this totally doesn’t do anything bad to my blood sugar. Actually, this Mexican chocolate pudding oatmeal recipe sort of evolved from finding out about the diabetes.

I have been an almost daily oatmeal girl for years, but my tastes have been slowly evolving. It started in my post-college weight-loss days, and I would get the packets of plain instant stuff that I would bring to work and cook with water and a packet of [amazon_textlink asin=’B000GG1S5O’ text=’Splenda’ template=’ProductLink’ store=’cupkalchi-20′ marketplace=’US’ link_id=’bf967bb5-12ff-11e7-9df8-cf1c59f1c856′] (yes, I admit it, I’m sorry to those of you that are bothered by this, but it is what it is). I gradually progressed from instant to Quick Oats, and eventually to Old Fashioned Oats, that I cooked risotto-style in the microwave at work, adding just a little water at a time till it was soft and creamy. I know, totally weird. Eventually I replaced some of the water with milk or almond milk. I never wanted anything like apples or raisins or cinnamon. I liked it plain.

It wasn’t until the past year or so that I started experimenting with adding some bananas or peanut butter, or the ultimate – unsweetened cocoa powder. Yes! Chocolate for breakfast with no guilt! Occasionally I would put all of the above together.

I can’t remember when I decided to add some spices to my chocolate oatmeal, and I have no idea why, because I was never a big fan of spicy Mexican chocolate before. But once I went there, I never looked back. Then when I found out about the gestational diabetes, I knew I needed to add some more protein to my breakfast to help balance my blood sugar, and someone suggested adding egg whites to oatmeal.

See, this recipe even fits into Egg Week, which kicked off with this awesome egg roundup, on the blog, along with Tuesday’s frittata. I thought this was totally gross in regular oatmeal, but when I did it with my Mexican chocolate pudding oatmeal, it gave it this amazing pudding-like texture that I went nuts over. One day I had it all made, but had to get The Bug out of bed, so I threw it into the microwave for a minute, and it made it almost like a fudgy brownie…  for breakfast…  SCORE! 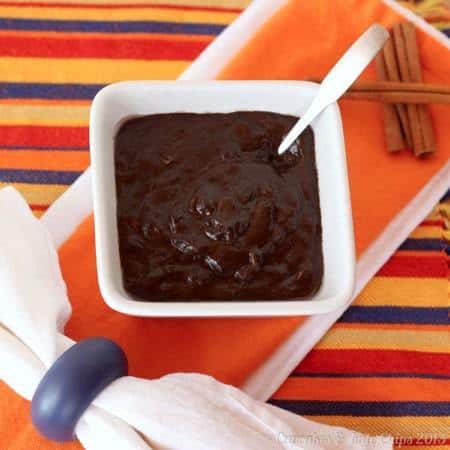 I cannot tell you how much I love this Mexican Chocolate Pudding oatmeal.

The spice does make my nose run a bit, but you can adjust the heat level to your liking. You can adjust the sweetness to you liking with whatever sweetener you like, too. I’ve used everything from brown sugar to [amazon_textlink asin=’B0078DP4IK’ text=’agave’ template=’ProductLink’ store=’cupkalchi-20′ marketplace=’US’ link_id=’93da5851-12ff-11e7-8c6b-19bbe1cc13bd’] to raw honey to [amazon_textlink asin=’B000A44QDI’ text=’turbinado sugar’ template=’ProductLink’ store=’cupkalchi-20′ marketplace=’US’ link_id=’a584e626-12ff-11e7-9066-cd9ef9505455′] to Splenda. The chocolate intensity is adjustable to your liking (regular cocoa powder, dark cocoa powder, or a combination, as I like). And of course, the consistency can be adjusted to your liking, making it pudding-y or brownie-y. See – totally customizable. And totally decadent. Anndddd…  totally healthy!!

I prefer to use egg whites from a carton because they incorporate more smoothly, and I don’t have to worry about salmonella, which is a higher risk while I am pregnant. Plus I have issues with leftover egg yolks or whites. You could even leave the egg whites out, like I used to (though you’ll probably need less spices), or use one whole egg, though that is not really how I like it.

Do I know if this is Bug-approved? Umm, no, because I am not a good food sharer. This baby is all MINE! 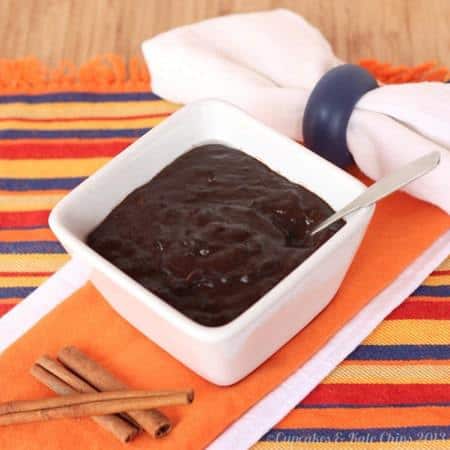 What is your favorite “sinful” breakfast?  Really, truly, I’d love me a big stack of chocolate chip pancakes, but that’ll have to wait a few more weeks.

Mexican Chocolate Pudding (or Brownie) Oatmeal is a healthy but decadent breakfast with a creamy texture, chocolaty flavor, and the kick of spices.
Servings: 1
Print Rate Save Saved!
Prevent your screen from going dark 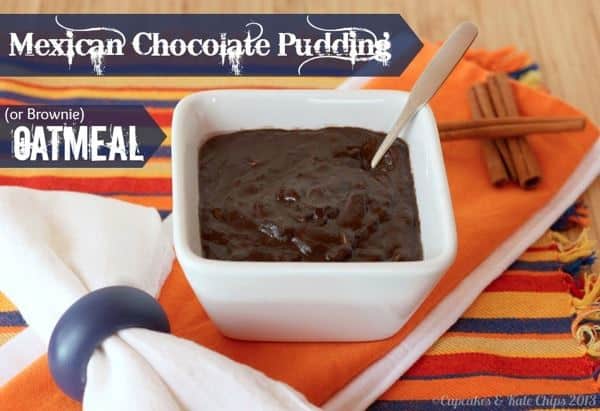 This recipe was shared with: Thursday’s Treasures Link Party