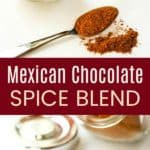 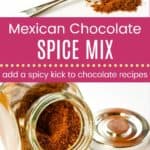 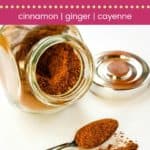 This easy Mexican Chocolate Spice Mix will add a little something extra to your favorite chocolaty treats. Serious chocolate lovers will go crazy for the combo when you add the warmth of cinnamon and ginger and the kick of cayenne pepper in this spice blend to any chocolate recipe. Spice up your cookies, cakes, brownies, and more!

I’m insane. Really, I am. I almost want to say that I am too smart for my own good, but I’m not gonna give myself that much credit. I’m just an engineer.

Almost a year ago I shared my recipe for Mexican Hot Chocolate Oatmeal. Love this stuff.

So everyday for almost a year I would measure out the oatmeal, sugar or honey or whatever sweetener I was using, the cocoa powder, and all the spices. Individually. The thought crossed my mind to make up a spice mixture so I’d only have to measure out one thing instead of three. But I was concerned about particle size.

And then when I took a teaspoonful to put in my oatmeal, some days I would get too much cinnamon and not enough cayenne kick, another day it would be too gingery (and I am not a huge ginger person – I like just a bit), and other days I would hit a hot spot and burn my mouth out.

These are the kinds of things you worry about when you work for a pharmaceutical company as a chemical engineer for ten years and have to think about things like particle size and mixing phenomena and homogeneity.

You can take the girl out of engineering, but you can’t take the engineer out of the girl.

Finally, I got annoyed and made the spice mixture. And you know what? No detectable flavor variations!

I can now just keep a jar in my pantry and so can you!

No, there is no chocolate in this spice mixture. You add it to other chocolaty foods and recipes.

All you need is:

The warmth of the cinnamon and ginger just play up and enhance the chocolatiness, and make it so rich and comforting. Then the cayenne starts to hit you with its bit of heat. Just enough to make you sniffle a bit and rev up your metabolism.

Helps cancel out the calories in the chocolate, right? 😉

Besides the oatmeal I mentioned earlier, I also love to add it to:

And some recipes from my friends that you may be able to substitute this spice mixture:

This simple combination of cinnamon, ginger, and cayenne pepper will add warmth and a little spicy kick to your favorite chocolate recipes. Enjoy the sweet heat of Mexican hot chocolate by adding it to cookies, brownies, oatmeal, cakes, and more!

With the warmth of cinnamon and ginger and the heat of cayenne, this Mexican Chocolate Spice Mix will add a kick to your favorite chocolaty recipes.
Print Rate Save Saved!
Prevent your screen from going dark

You can divide or multiply these quantities to make as much or as little as you would like to have on hand.
Author: Brianne @ Cupcakes & Kale Chips 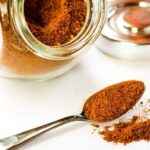