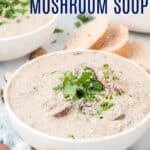 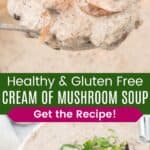 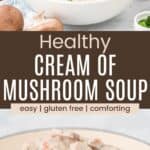 Warm up with a healthy take on cozy homemade Cream of Mushroom Soup! Enjoy this classic and easy soup recipe all season long without the guilt. And this version is naturally gluten free!

There’s nothing more comforting than tucking into a warm bowl of cream of mushroom soup in the wintertime! This is a classic homestyle soup and one of my favorites from my childhood. I mean, who doesn’t have at least one fond memory of Campbell’s Cream of Mushroom?

Since then, and since going gluten-free, I’ve come to terms with the harsh (way harsh) reality that some of my favorite canned soups aren’t so great in the gluten department.

That’s why we’re making an amazing, guilt-free, and gluten-free cream of mushroom soup! This homemade mushroom soup recipe is hearty and good for you, lightened up with Greek yogurt and filled with a whole lot of earthy, savory mushroom flavor. It’s just as rich and creamy as any version that’s made with heavy cream!

Is Cream of Mushroom Soup Healthy?

Traditional canned cream of mushroom soups and even homemade soups often rely on not-so-healthy ingredients like heavy cream, thickeners, and other additives to achieve a silky, smooth texture. That’s why I love this recipe! It’s way healthier, made with just the good stuff, and tastes just as delicious.

Below I’ve rounded up the ingredients you’ll need to make this perfect lightened-up cream of mushroom soup. Be sure to pay a visit to the recipe card at the end for the full recipe details!

How to Make Cream of Mushroom Soup

You’re about 20 minutes away from the coziest, creamiest bowl of homemade soup! Here’s how easy it is to make a gloriously creamy mushroom soup that’s health-conscious, too:

How Do You Thicken Mushroom Soup?

The secret to thickening this uber-creamy, extra-rich, and yet still healthy soup is two things: the Greek yogurt, and the blending! Greek yogurt fills the shoes of heavy cream in this soup recipe perfectly, meanwhile, puréeing a portion of the mushrooms with a blender makes the soup silky and thick.

You can blend more or less of the mushrooms depending on how thick you prefer your soup.

Try these helpful tips and tricks when making a healthy cream of mushroom soup from scratch:

Store your gluten-free cream of mushroom soup airtight in the fridge for up to 3-4 days. Reheat portions gently on the stovetop, or in the microwave in 30-second bursts, stirring in between, until the soup is warmed through.

Can I Freeze Cream of Mushroom Soup?

I don’t recommend freezing this mushroom soup once the dairy has been added. If you’re planning on freezing your soup, your best bet is to leave out the Greek yogurt and only stir it in once the soup has been thawed and reheated.

Basically, follow the recipe as directed, but leave out the yogurt. Once the soup has cooled completely, store it airtight in a freezer-safe container and freeze it for up to 2 months.

Whenever you’re ready to eat it, defrost the soup in the fridge, reheat it as usual, and then stir in the Greek yogurt before serving.

Cream of mushroom soup and crusty bread are a match made in comfort food heaven. Serve a bowl of mushroom soup as a hearty starter with slices of crusty homemade French Bread or garlicky Dinner Rolls. Fluffy gluten-free bread is perfect for dunking and mopping up every last bit of creamy soup! Or ladle it into some homemade Gluten Free Bread Bowls!

Do you know what’s also the ultimate for dunking into creamy mushroom soup? Grilled cheese! Try my Buffalo Chicken Grilled Cheese for something with an extra kick.

Or go the soup and salad route with an Italian Wedge Salad or Caesar Salad.

What Kind of Soup Pot to Use

Even though this cream of mushroom soup doesn’t have to simmer for a long time, I still like to make it in a heavy-bottomed pot, like an enameled cast iron Dutch oven. The heat distributes evenly, which helps when sauteeing the mushrooms. And it’s less likely to scorch or curdle when you add the yogurt. They are also very easy to clean. 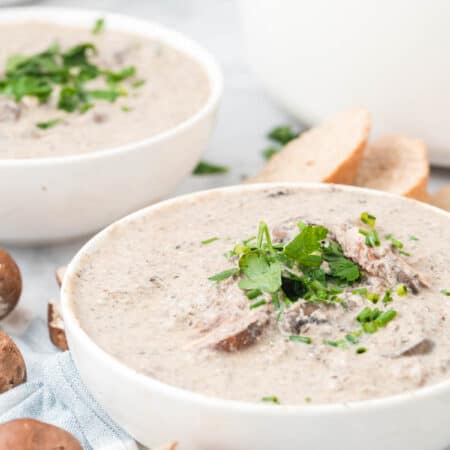 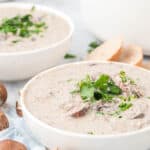