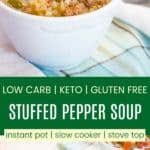 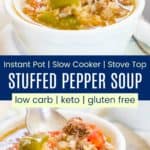 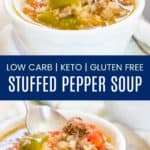 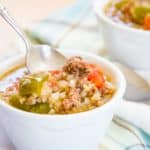 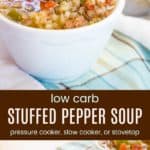 Keto Stuffed Pepper Soup has everything you love about classic stuffed peppers, but in a cozy low carb soup recipe that will warm you from the inside out. Plus by swapping the standard cooked rice for cauliflower rice, you cut the carbs and add more veggies for some seriously healthy comfort food. There are even options to make it in your Instant Pot, slow cooker, or right on the stove. This is an easy low carb dinner recipe your entire family will love.

I’ve probably told you this before, but my husband always claims that he is “not really a soup person.” Even after he has devoured a bowl of soup I’ve made, he still tells me, “This was pretty good, but I still don’t really like soup.”

My youngest takes after daddy when it comes to soup. Or so he says. And it did not go over well when I made Shepherd’s Pie Stuffed Peppers.

My oldest hates tomatoes. He had a bad tomato experience when he was little and still won’t touch them. He picks them all out when I make Crockpot Balsamic Chicken with Tomatoes and Basil.

Green peppers? Don’t get me started.

So why on Earth would I make this soup? Sometimes what mama wants mama gets.

And I actually got both the low carb soup I wanted AND positive reviews from the family.

I absolutely loved the beefy flavor and all the cauliflower rice and veggies. The picky little one devoured it in about three minutes and drank every drop out of the bowl. And the husband and big guy said it was pretty good. Given their attitudes about things like soup and tomatoes, I think that counts as a rave.

So now it’s your turn to win over the family.

What is in this low carb soup recipe?

Depending on how you want to make the soup, you’ll need one of the following:

How do you make Stuffed Pepper Soup?

You have three different options, whether you want to cook it fast, cook it slow, or cook it in the traditional way without any special appliances.

Make it in your pressure cooker or Instant Pot:

Make it in your slow cooker:

Make it on the stovetop:

About Keto Soups and Stews

This easy and flavorful low carb soup recipe is from my friend Carolyn’s cookbook Keto Soups & Stews. In this cookbook, she gives you over fifty recipes for the comfort food you crave any time of the year. Her blog All Day I Dream About Food is already a treasure trove of low carb deliciousness. But she is sharing even more of her amazing recipes in her collection of keto cookbooks.

As with all her cookbooks, Carolyn starts out by giving you all of her best tips, tools, and ingredient recommendations. Then she dives into a chapter on making your own broth, but of course, tells you her favorite brands if you want to buy it.

The chapters are then divided by proteins (chicken soups and stews, beef, pork, and even seafood), plus a vegetarian chapter. And each recipe has a full-color photo with a photo index at the back of the book. The Chicken Cordon Bleu Soup, Italian Meatball Veggie Soup, New Mexico-Style Red Pork Chili, and Mushroom Brie Soup are totally calling my name.

Where can I buy Easy Keto Soups & Stews?

You will find this book on bookstore shelves and possible even in Costco, but you can always get it on Amazon, along with Carolyn’s other cookbooks. Her recipes are perfect for my family, because, for example, I can have her Chicken Enchilada Skillet on cauli rice in a lettuce wrap, they can have theirs with brown rice or tortillas.

You’ll be putting this recipe on your regular dinner rotation. Whether you follow a keto lifestyle or not, I guarantee you will love the flavors from classic stuffed peppers. But in this low carb soup, you’ll warm your body and soul, and even squeeze in a few extra veggies. That’s always a good thing for everyone! 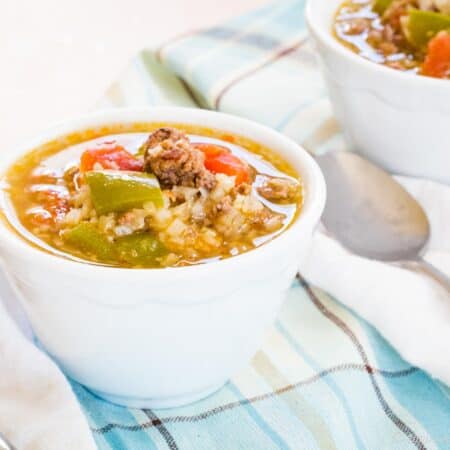 Everything you love about classic stuffed peppers in a cozy soup made in a pressure cooker, slow cooker, or on the stove. This keto-friendly soup used cauliflower rice instead of regular rice.
Prep: 5 mins
Cook: 25 mins
Total: 30 mins
Servings: 4
Print Rate Pin Save Saved!
Prevent your screen from going dark 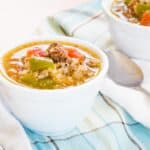