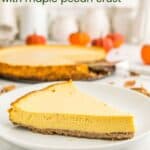 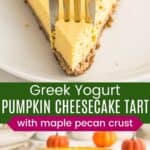 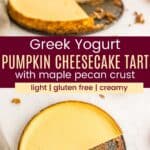 Sweet and creamy but still light, this Greek Yogurt Pumpkin Cheesecake Tart has all your favorite flavors of autumn. Especially since that rich cheesecake filling is on top of a nutty maple pecan crust. You’ll agree this is one of the best gluten-free pumpkin recipes for Thanksgiving.

Call me crazy, but I’m not a fan of heavy, dense cheesecake. I do love the flavor of cheesecake though, so I’m always turning it into something lighter, whether it’s Strawberry Cheesecake Popsicles in the summer or this pumpkin tart in the fall.

The secret to a rich and creamy cheesecake dessert that is actually lighter – Greek yogurt! It makes it smooth, enhances that tangy flavor, and still tastes decadent.

Plus this pumpkin cheesecake is naturally gluten free because the crust is made with pecans that are ground into crumbs. Mixed with some butter and maple syrup, the nutty flavor pairs so nicely with the earthy, warm spices.

And, you know, it’s pumpkin, Greek yogurt, and pecans. It’s practically like eating a yogurt parfait. Have a slice for breakfast!

OK, maybe that’s taking things a little too far. But it really is a perfect gluten free dessert that evokes all the flavors of fall – pumpkin, pecans, maple, cinnamon, and nutmeg. None of the flavors are over the top, so that nice cheesecake-y tang comes through without being overpowered by the pumpkin spice. Try it in place of the usual pumpkin pie this Thanksgiving!

You’ll be amazed that this pumpkin cheesecake tart is practically a gourmet dessert but is made with just a few simple ingredients.

For the maple pecan crust:

For the pumpkin cheesecake filling:

How to Make Pumpkin Cheesecake Tart

Get ready to make the maple pecan crust by first preheating the oven to 350°F and coating a 10-inch springform pan with cooking spray.

In a food processor or blender, pulse the pecans to grind them into small crumbs. Then add them to a bowl with the maple syrup, melted butter, and salt. Use a fork to toss everything together until it is crumbly, then press it into the bottom of the prepared pan.

Bake the crust for 15 minutes or until it is lightly browned. You can set it aside until you are ready to fill it, and even make it a day in advance. But you can also fill it right away without letting it cool.

If your oven isn’t still on from making the crust, then preheat the oven to 350°F. You’ll be using a water bath in the oven so the moisture keeps the cheesecake from cracking. So fill a baking dish with water and place it on one of the lower racks of the oven while it preheats.

Combine the Greek yogurt, pumpkin puree, eggs, light brown sugar, cornstarch, pumpkin pie spice, and salt in a blender and puree until fully combined and smooth. Pour it over the baked crust.

Bake for 35-45 minutes, or until the center is set, and the edges begin to brown and pull away from the sides of the pan. Leave the tart in the oven, turn the oven off, and let it cool for 5-10 minutes before removing it from the oven. Place the pan on a rack to let it cool to room temperature.

Once it has fully cooled to room temperature, place it in the refrigerator uncovered for 2-3 hours to chill completely. You can then open the latch on the springform pan and gently loosen and remove the ring. Then slice and serve with whipped cream, if desired.

The Pumpkin Cheesecake Tart must be stored in the refrigerator until you are ready to enjoy it. Once fully chilled, it can be light covered with plastic wrap either before or after removing it from the pan.

Make it in Advance

BLENDER: Use your blender to pulse the pecans into crumbs and blend the filling mixture. Your basic blender will work just fine. No need for anything fancy.

BAKING DISH: A glass baking dish filled with water in the lower half of the oven will keep the cheesecake from cracking.

MAPLE SYRUP: For the best flavor in that crust, you want real maple syrup. I think the best comes from Vermont. 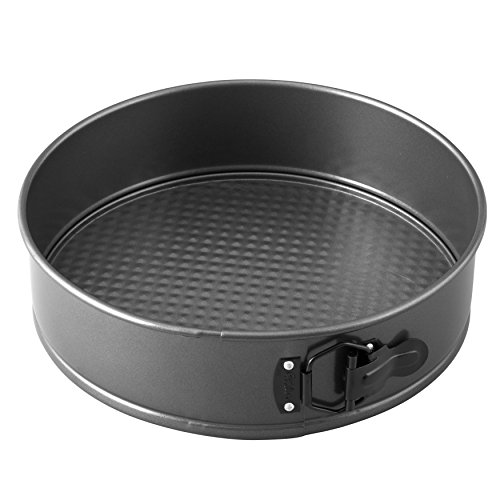 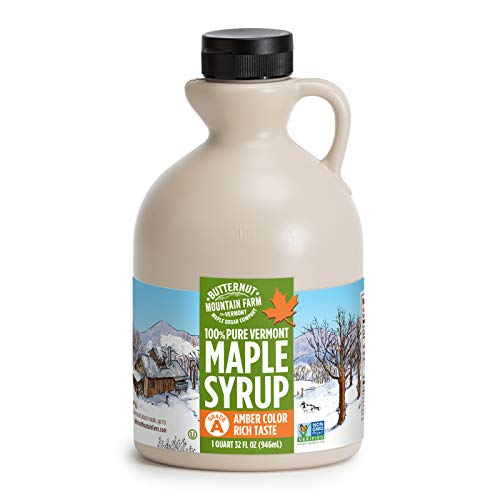 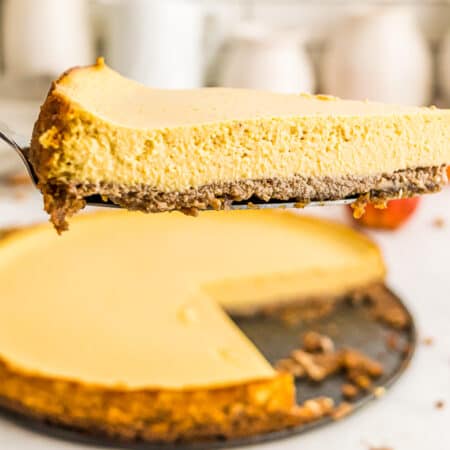 Sweet and creamy but still light, this Greek Yogurt Pumpkin Cheesecake Tart has all your favorite flavors of autumn. Especially since that rich cheesecake filling is on top of a nutty maple pecan crust. You'll agree this is one of the best gluten-free pumpkin recipes for Thanksgiving.
Servings: 8 servings
Print Rate Pin
Prevent your screen from going dark 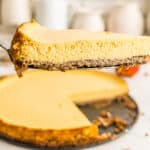