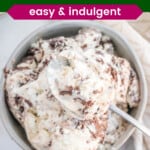 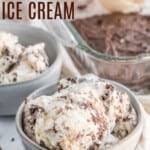 This decadent Nutella Brownie Ice Cream starts with a simple base of no-churn cheesecake ice cream that is loaded with crumbled brownies and swirls of chocolate hazelnut spread. It’s so easy to make and you don’t even need an ice cream maker. All of the sweetest people in your life will love a scoop (or three)!

This decadent Nutella Brownie Ice Cream is definitely a happy accident. I ended up with a batch of overbaked brownies. Not inedible, but not quite as gooey and fudgy as I like. So what was the solution to avoid tossing a pan of chocolaty goodness in the trash?

Turn it into ice cream! Yes, a fully-loaded ice cream. Because if it is full of ribbons and swirls and chunks and bits, you can bet I am all over it.

So the next time you overbake your brownies, or even if you bake them perfectly but only end up eating about half the pan just mix them into a simple batch of no-churn cheesecake ice cream. Then add a swirl of Nutella for good measure. Because there aren’t many things that aren’t made better when you add thick chocolate hazelnut spread.

Why this Recipe Works

Seriously, I have no words for why this brownie ice cream is so amazing!

OK, I have a few words. It starts with a base of no-churn ice cream. That means you don’t need to separate eggs and cook and churn and freeze. It’s all a matter of whipping cream and folding in some sweetened condensed milk. Only here, I added cream cheese to give it that richness of cheesecake with a tangy flavor that balance all of that sweet chocolate goodness.

And it has swirls and chunks and ribbons of brownie gooeyness. It really is the perfect way to salvage some overbaked brownies, or maybe even some that have been sitting around for a few days and are starting to dry out. They will absorb moisture and get all fudgy again.

Plus, you can use any brownies you like. Make a batch of your favorite homemade brownies, like my super fudgy Gluten Free Brownies. Double down on the flavors in the ice cream by using Flourless Nutella Cheesecake Brownies. Add an extra element of chocolate chip cookies by using Gluten Free Brookies. Use your favorite box mix. Or if you are separate to make the ice cream recipe but don’t want to deal with baking, pick up a pan of brownies at the grocery store!

The ice cream base itself only has four ingredients, then you just need your brownies and a jar of chocolate hazelnut spread to make this epic Nutella brownie cheesecake ice cream.

How to Make Brownie Ice Cream

Preparations: Start by placing a large glass or metal bowl in the fridge or freezer. Having a chilled bowl helps the cream to whip better.

Make the ice cream base: Using an electric mixer or whisk attachment, beat together the cream cheese and sweetened condensed milk until smooth. Then in the chilled bowl, beat the heavy cream and vanilla to soft peaks. Gently fold the cream cheese mixture into the whipped cream.

Add the mix-ins: Crumble about half of the pan of brownies (more or less, as desired) into to cream mixture, top with small dollops of Nutella, and gently fold in to create brownie and Nutella swirls.

Freeze: Pour the mixture into a container that you can freeze and has an airtight lid, cover, and place in the freezer for 4-6 hours or until frozen.

Now enjoy a bowl or no-churn brownie ice cream, or scoop some over more brownies and add hot fudge and whipped cream to make the ultimate brownie sundae!

How long can you store no-churn ice cream?

If you keep it sealed in an airtight container or tightly wrapped with plastic wrap, this ice cream should stay good for up to two months. Wrapping it well to keep out air and moisture will help prevent freezer burn. Freezer burn does not make it unsafe to eat, but it may affect the texture or flavor. 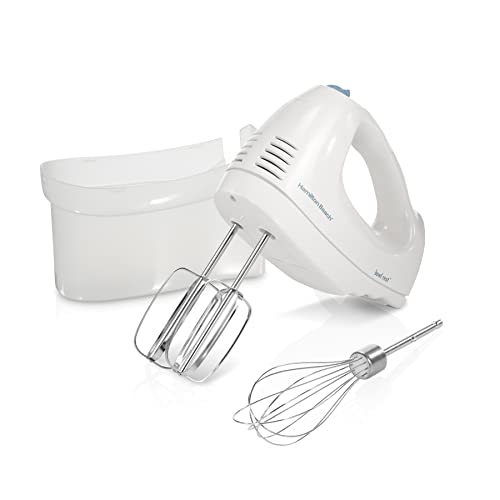 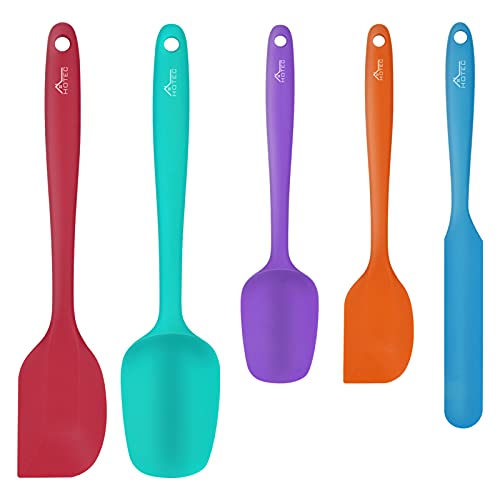 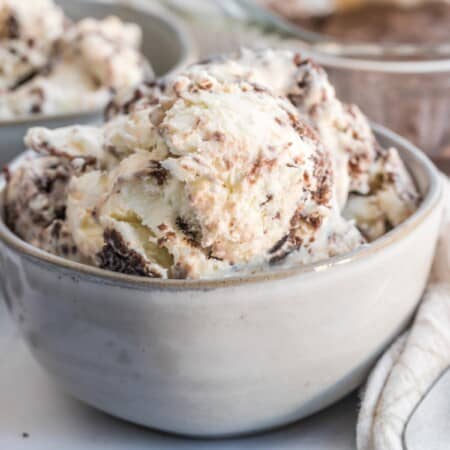 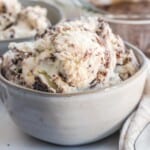