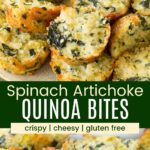 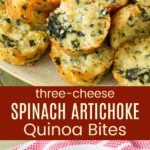 I see people running around to seventeen different sports and activities every week, day trips and outings and overnights away every weekend, squeezing in movies and dinners at restaurants after school, and I feel like I am doing something wrong.

Do you know what we did for the past few Saturdays? Absolutely nothing.

Well, to be fair, a few Saturdays ago was New Year’s Eve and three-quarters of us were sick and eating Butternut Squash Soup and sipping on a Cold Toddy Whiskey Mule (well the second one was just me – no whiskey for the kiddos!). And the other Saturdays it’s not like we were not doing anything at all. I was putting away Christmas decorations, purging closets, filming videos, and such.

My kids were playing. Just playing. Good as gold, happy as clams.

And I’m trying to be ok with that instead of feeling bad that we weren’t hosting playdates or dinners for friends, going to the Smithsonian, or whatever. We were all just home. Doing our thing. And nobody seemed to mind or care or want to be anywhere else.

And you know what? That’s totally fine. Or I’m at least going to keep convincing myself it’s fine.

You know what else is totally fine? The fact that I can only get my kids to eat spinach or artichokes or quinoa when I turn it into cheesy finger food…

These are a great game day appetizer, after school snack, or even a dinner side dish.

You’ve got the usual suspects in classic spinach artichoke dip – spinach, artichoke hearts, and three kinds of cheese – mixed up with cooked quinoa and an egg to stick it all together. Then just pack the mixture into a mini muffin tin and bake till you have golden, crispy little bites perfect for dipping in tomato sauce and popping right in your mouth. Even the pickiest of eaters won’t be able to resist all the cheesy finger food fun.

What do you need to make cheesy quinoa bites?

You might also want some Marinara Sauce for dipping!

How do you make spinach artichoke bites?

This brief overview will show you just how easy they are to make. Check out the recipe card at the bottom of the post for the full amounts and details.

BRIANNE’S PRO TIP: Make sure you’ve squeezed as much of the excess moisture out of both the thawed spinach and canned artichoke hearts as possible before you stir everything together. This will ensure everything sticks together.

Check out these kid-friendly quinoa recipes:

Here are more gluten free appetizers you might enjoy:

Three kinds of cheese and all the flavors you love about Spinach Artichoke in a bite-sized finger food. These make a great side dish or snack, but you can also serve them with tomato sauce for dipping as a party appetizer. Only eight ingredients, healthy, and gluten free too! 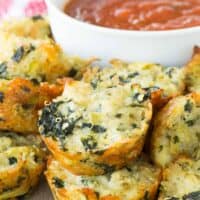 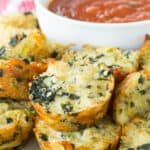