Bourbon Pecan Chocolate Popcorn is a fun, crunchy snack with a little kick and a lot of chocolate. This easy no-bake snack tastes like a bite-sized version of bourbon pecan pie! 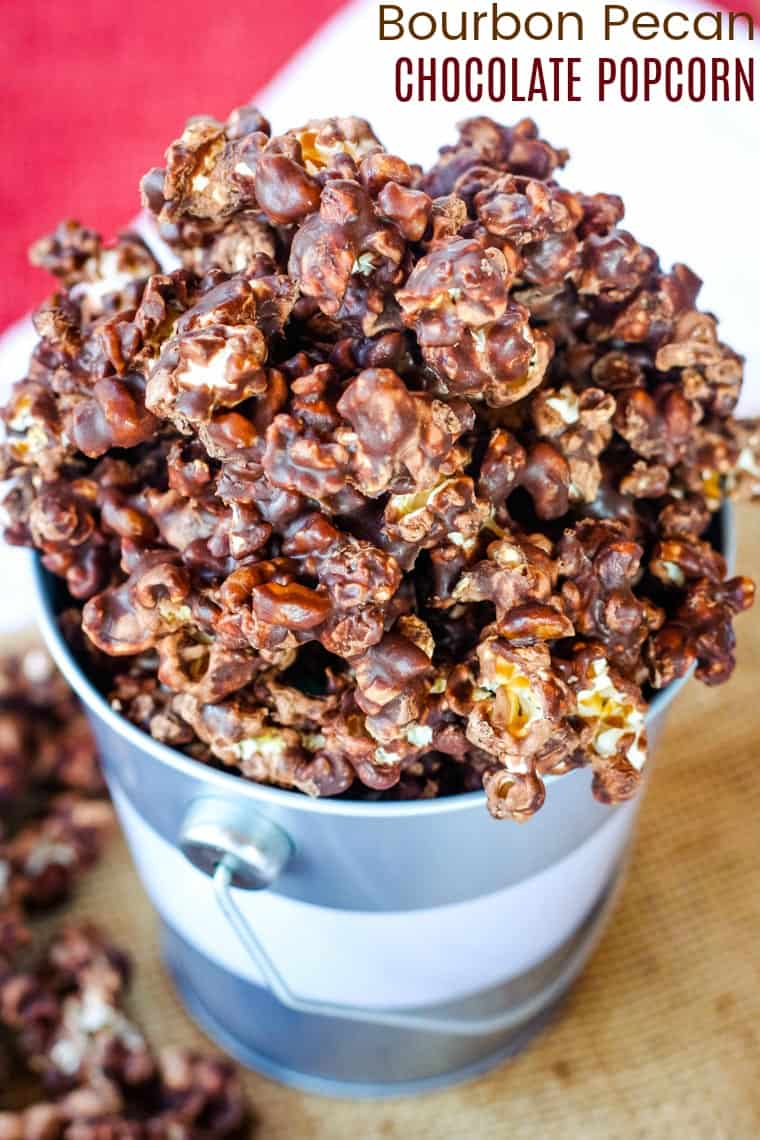 2013 has certainly been an eventful year. The Bug has gotten so big! Even at only three-and-a-half, I can already see him becoming so intelligent and independent and creative, with his own mind and opinions. While this makes him difficult to deal with at times, it is also incredible to observe and to realize that he is my child. Well, mine and The Hubby’s, an amazing combination of the two of us. This becomes more and more evident the older he gets.

I also became a mom of two with the birth of Baby Smiles. While his birth was an incredible experience, the first few months were pretty intense. Worries about his weight gain, getting used to juggling two kids, complete and utter exhaustion.

But the past two or three months have been super fun. Perhaps it’s because this is the period of time that I went back to work full time with The Bug, or perhaps just because six to nine months is just such a fun period of amazing developments, but I have loved just watching. Watching his silly faces, watching him go from laying to crawling to sitting up on his own to pulling up. He plays and interacts with people, especially his big brother. And as much as The Bug seems a blend of The Hubby and me, sometimes I wonder if Baby Smiles was switched in the hospital. While The Bug was a content baby, Baby Smiles is happy. Just carefree and adventurous. I can’t wait to see how his personality evolves.

And I wasn’t the only one to add a member to our family. My cousin also had her first baby, an adorable little girl. Unfortunately, our kids won’t have the opportunity to be as close as we were growing up since they now live in Kentucky.

It is so exciting to see the next generation of our family and to see my little cousin as a mama. Distance has made it hard to be as close as when we were little, so I love that now we have a new type of connection and way to relate as mothers.

What does Bourbon Pecan Chocolate Popcorn have to do with any of this? 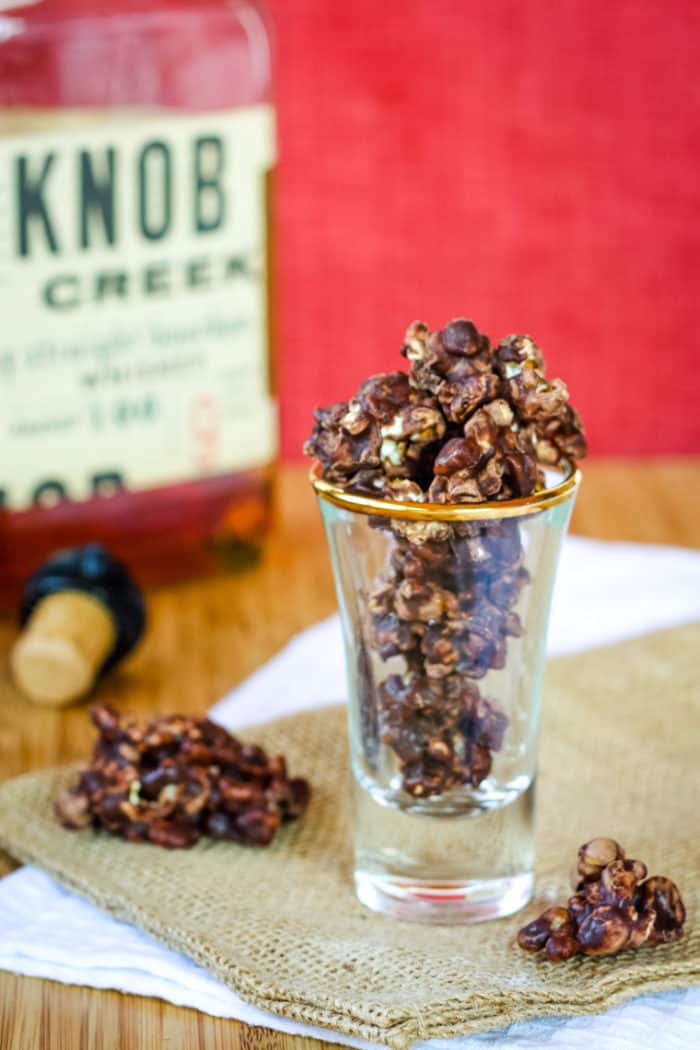 The bourbon was inspired by my Thanksgiving trip to visit that family in Kentucky. It was a wonderful time with my family and the first time we got to meet my cousin’s baby. They got to meet Baby Smiles. This trip also kind of proved to me that The Hubby and I can do this. As I said, the early months with Baby Smiles were rough. Plus The Bug, well, he is three, and three-year-olds are slightly insane. And I have always been a vacation uber-planner, wanting to extensively research and schedule every meal and activity.

But despite being crammed in a hotel room with a sick baby who woke up every two to three hours, an overtired preschooler who was woken up by his brother, but still refused to nap and was a bit spazzy, we rolled with the punches. We had a really loose game plan, and had a great time! And ate some great food, naturally.

Pecans, well, they just work with bourbon. So there!

See how I wove that all together to make bourbon pecan chocolate popcorn? Genius, right?

This would be perfect to serve art a Derby Day Party with some Kentucky Hot Brown Dip, a Frozen Mint Julep,  or any of these Kentucky Derby Recipes. 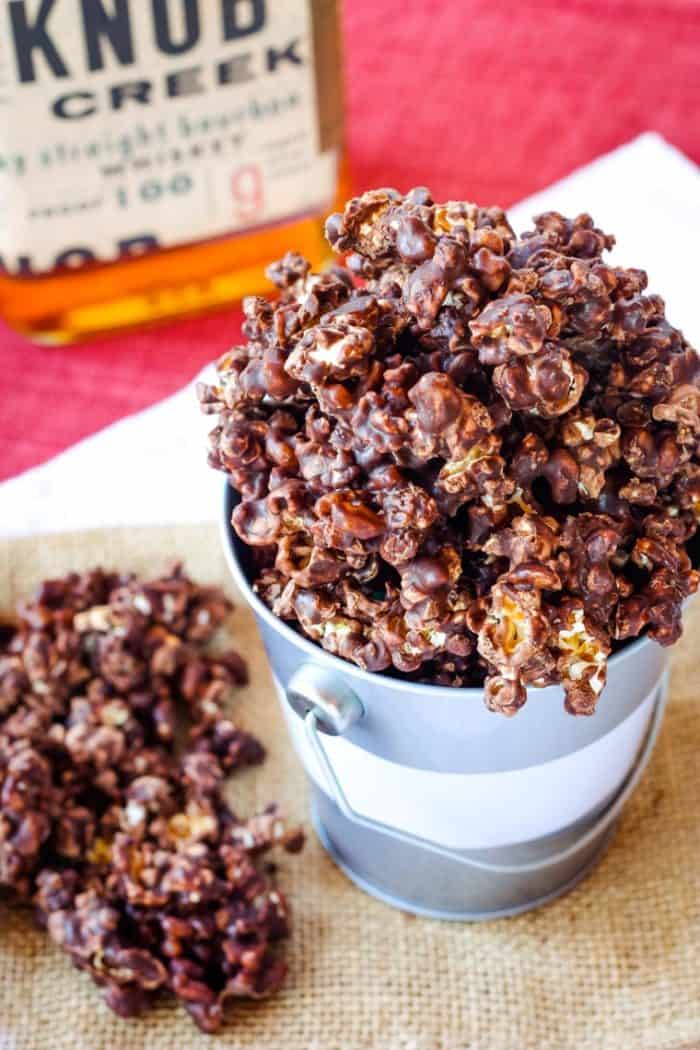 What kind of chocolate is best for making chocolate popcorn?

One thing about this recipe for Bourbon Pean Chocolate Popcorn – use melting chocolate, NOT chocolate chips, and make sure you melt the chocolate with the bourbon and do not add the bourbon after melting the chocolate. Trust me on this one. Doing either will cause the chocolate to seize and while you can turn it into delicious truffles (sadly the chocolate shell on mine cracked, so they aren’t making it to the blog… yet), it will not be runny enough to coat the popcorn. I popped some popcorn in the microwave using this method, but if you are going to use microwave popcorn, get the plainest kind you can get. I think most brands call it “Natural”.

Honestly, due to the bourbon, this isn’t going to be the crunchiest popcorn you’ve ever eaten. But that doesn’t matter because it is delicious! And while it will keep in an airtight container for a couple of days, you probably don’t want to keep this around for a week. Not that it’ll last that long. The Hubby taste-tested for me… and then I proceeded to polish it off. Luckily I only made a half batch.

What other popcorn recipes can you make? 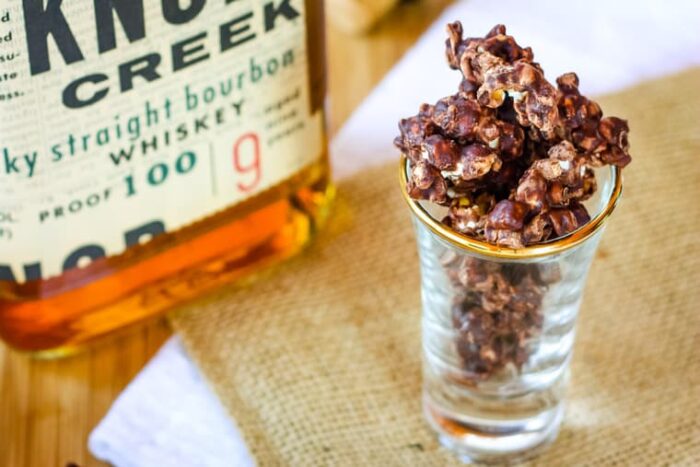 A fun popcorn snack with the crunch of pecans, a little kick of bourbon, and lots of chocolate!

I hope you’ll leave a comment and give the recipe a FIVE STAR rating. And share a photo of it on this pin, over on Pinterest! 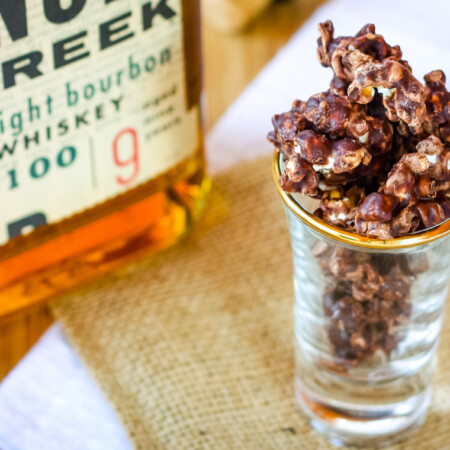 A fun popcorn snack with the crunch of pecans, a little kick of bourbon, and lots of chocolate!
Prep: 15 mins
Total: 15 mins
Servings: 6
Print Rate Pin
Prevent your screen from going dark 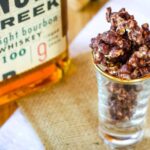