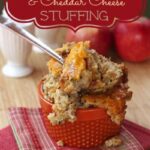 We’ve made it through Back to School, the leaves are falling, the kids have picked out their costumes and before we know it, we will be clearing out the last remains of the Halloween candy. It’s time to start thinking about our Thanksgiving menus. And what Thanksgiving menu is complete without stuffing? This year, try something new with Apple, Bacon and Cheddar Cheese Stuffing, made here with the new Rudi’s Savory Herb Gluten-Free Stuffing.

Let’s talk stuffing for a minute. One recipe you will never see here is the stuffing we eat every year for Thanksgiving – my grandma’s stuffing. There are a few reasons for this. The first is that there is no real recipe, and now I am the only person who knows how to make it. Not that I even really know. I kind of wing it every year. I pick up some random bags of stuffing mix – some crumbs, some cubes, maybe cornbread, maybe seasoned, maybe not. Cook up some onion and carrots, possible celery except that nobody in may family likes celery. Maybe I add some ground beef, or have grandma rolling in her grave by adding turkey sausage. I sprinkle in some seasonings, or, gasp, fresh herbs. Then I add some unknown amount of milk and chicken broth and smush it all up into a big mass of wallpaper paste, which is then transferred to a baking dish in clumps that are lightly pressed together and baked.

Which brings me to the second reason you will never see the recipe on my blog. My whole family loved grandma’s stuffing. They even love my version, and tell me I am pretty close to hers. But I don’t think anyone outside of our family would touch this stuff with a ten foot pole. You see, after baking it, we then cut it into cubes for serving. Thick, dense cubes. Basically, I think if you made enough, these cubes could be used to build a nuclear fallout shelter. Seriously – lead bricks. But yummy, carby, tasty lead bricks. Lead bricks that we keep coming back for. Especially the crispy end pieces. Yum!

This Apple, Bacon and Cheddar Cheese Stuffing is ridiculously good. So good, in fact, that my little family of three (well, four, but Baby Smiles is still working his way through pureed fruits and veggies) devoured the entire casserole in two nights. We could not stop eating it.

It’s moist and light, with so many flavors, but none of which overpower any of the others. The apples bring an element of sweetness, which is perfectly balanced by the salty, smoky bacon and the little pockets of sharp cheddar cheese. And thanks to the folks at Rudi’s, this stuffing can be made gluten free using their new Savory Herb Gluten-Free Stuffing.

I was definitely impressed by the flavor and texture of the gluten-free stuffing mix. There was a rich, almost butteriness, and a wonderful flavor, while the prepared stuffing was nice and moist, it still held together and didn’t get mushy or crumbly with the addition of the wet ingredients.

I am so excited to be helping Rudi’s spread the word about this tasty new product that makes it easy to bring delicious stuffing to out gluten-free Thanksgiving dinner table. Just to tell you a little more about the product, Rudi’s Gluten-Free Stuffing is an artisan inspired gluten-free stuffing that is perfect to bring to any holiday table for the whole family, gluten-free or not. Made from the bestselling Rudi’s Gluten-Free Multigrain & Original breads and blended with a perfect amount of savory spices, it is a perfect match to any holiday meal. The stuffing can be prepared in about 5 minutes and is dairy, soy and, of course, gluten-free. Unlike other Rudi’s Gluten-Free products, our gluten free stuffing is a limited time only program available while suppliers last for 2013 holiday season.

You can find out more about this product, plus download a coupon on Rudi’s website. Plus, from November 4-15, they will be spreading the word about their new gluten-free stuffing by holding a giveaway on their Facebook page, in which they will be giving away lots of cool prizes!

Finally, as part of their promotion, you have the opportunity to with a Gluten-Free Stuffing kit valued at $90, which I teased you with on Instagram.

Enter NOW using the Rafflecopter! You have till 11:59 pm on Friday, October 8th to enter.

Disclaimer:  Rudi’s provided me with the Gluten-Free Stuffing Kit, which included a sample of the Gluten Free Stuffing, and a kit to give away. No additional compensation was received. As always, all opinions are my own. 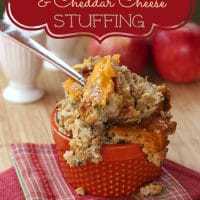 Want to round out your Thanksgiving meal?

Plus a few more dishes from my friends…