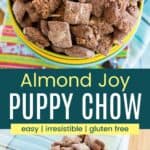 Almond Joy Puppy Chow is a sweet no-bake snack mix that tastes just like an Almond Joy. This recipe for puppy chow has Chex cereal and almonds covered in almond butter, chocolate, and coconut, combining flavors of the popular candy bar in a new twist on a classic muddy buddies recipe. It’s one of the best gluten free no-bake desserts that you won’t be able to stop eating. 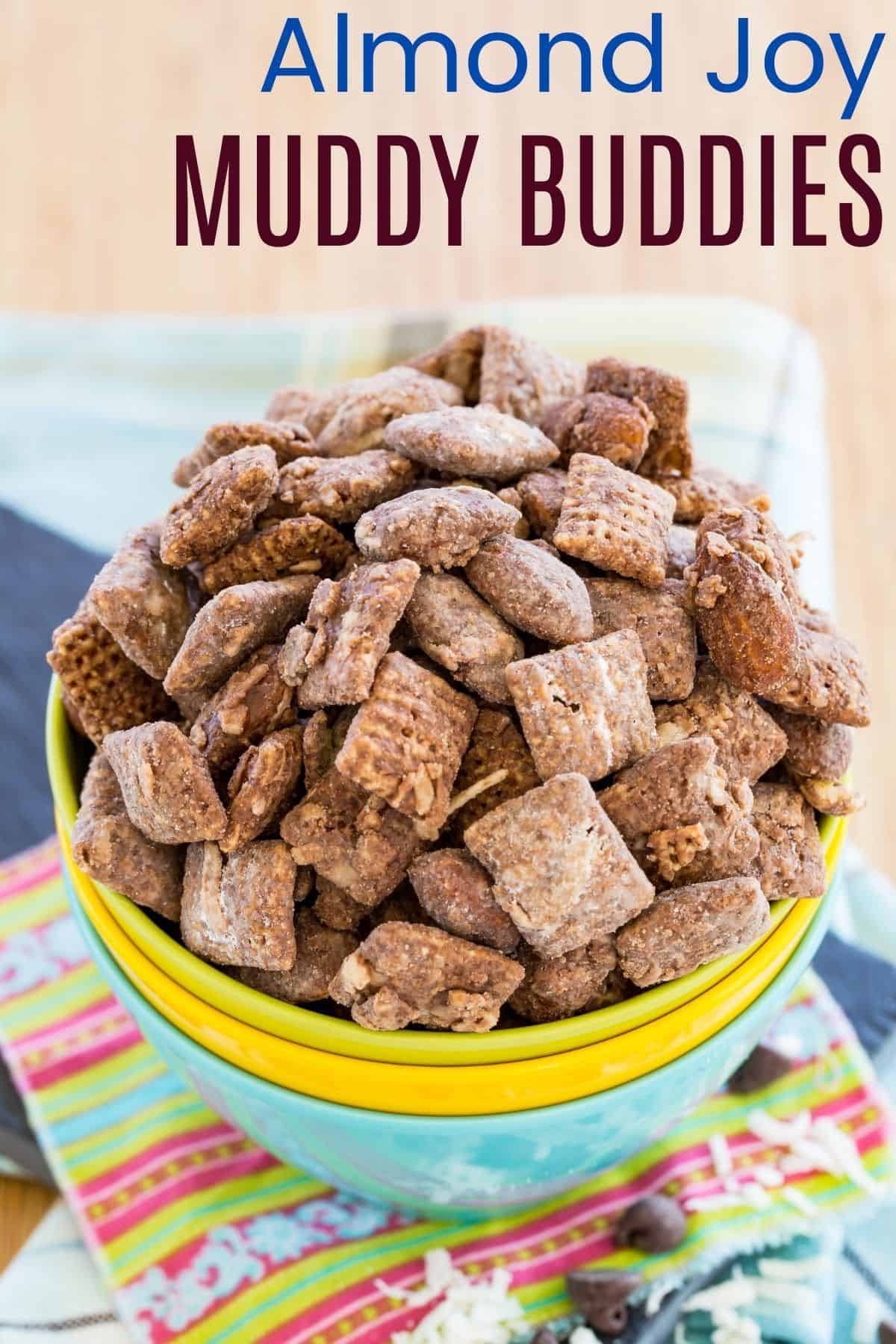 I like to convince myself that my friends and I were actually really cool in middle school and that it was everybody else who, well, just wasn’t. So they just could not comprehend and appreciate our level of coolness. As adults, not much has changed, except now our get-togethers are less frequent (the last one was five years ago – we can’t let that happen again) and involve alcoholic beverages. Yes, we were your typical goody-two-shoes – no bending the rules. Our strongest drink back then was probably Dr. Pepper.

One thing that has changed is our selection of food. When we were kids, our party snacks of choice were Bugles, Cheetos, and Onion Dip. We may not have matured all that much, but our snacks have gotten a bit more sophisticated.

This puppy chow recipe is addictive, and I mean, seriously addictive. But I managed to control myself at the party . Sorry, oops, that never happened.

How do you make Muddy Buddies without peanut butter?

Some emails from CKC readers ask if you can make muddy buddies without peanut butter. The answer is YES, yes you can! For this recipe, I simply swapped the peanut butter for almond butter.

I love the combination of chocolate, almond, and coconut, like in this Flourless Almond Joy Cookie Dough Ball. So if you want your almond butter puppy chow to taste like an Almond Joy Candy Bar, there are just a few simple swaps from the classic recipe:

FYI – since we were a small group and there were going to be a few desserts, I actually only made up a half batch of the puppy chow recipe, but the full amounts are shown in the recipe here. So you can definitely cut the recipe in half if you don’t want to make so much. 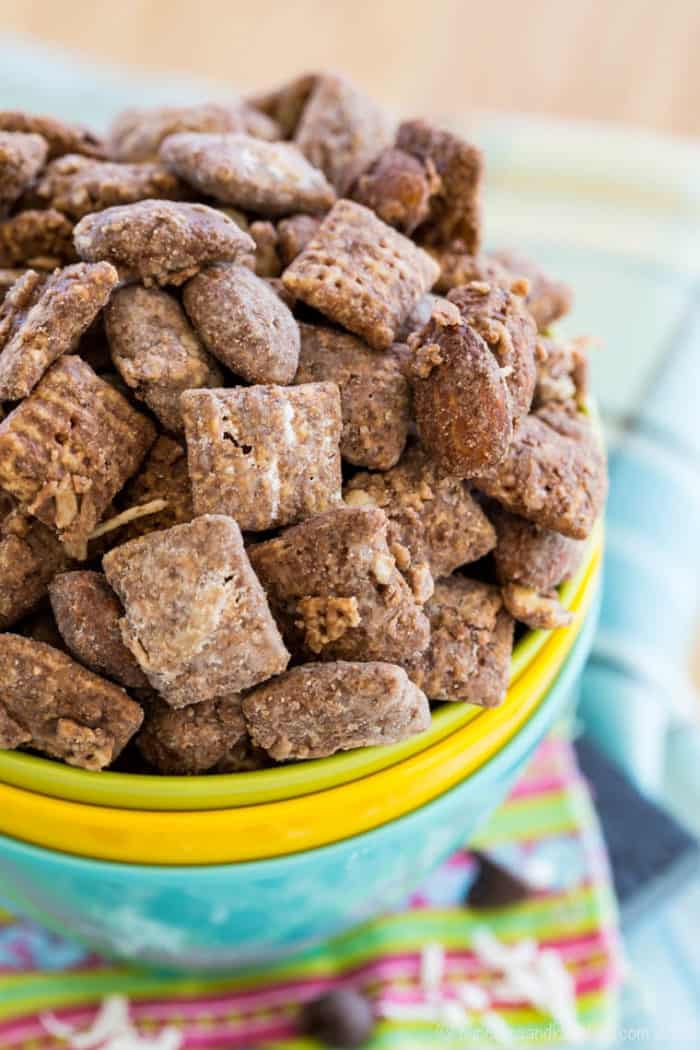 Can you make gluten-free muddy buddies without peanut butter?

Since several varieties of Chex are gluten-free, this is an easy sweet treat for anyone who has to avoid gluten. And if you have a peanut allergy, you’ll be happy to know that these are muddy buddies without peanut butter; we make the puppy chow with almond butter instead!

If you want to make a recipe for puppy chow that is vegan, that is an option too. Just make sure to use gluten-free and/or vegan chocolate chips, powdered sugar, and vanilla extract. 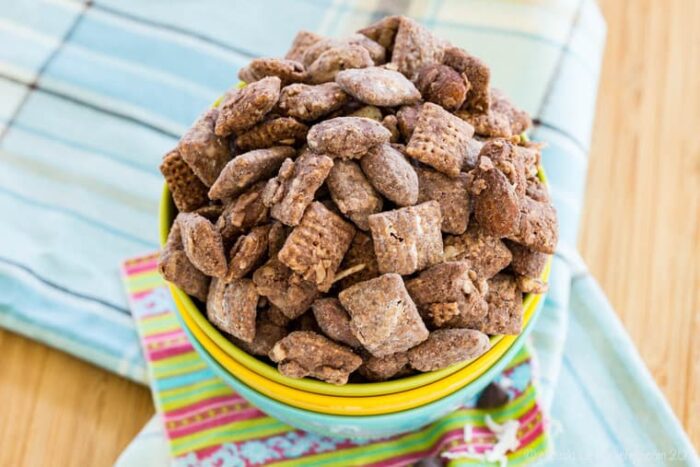 If you like this recipe for puppy chow, here are other muddy buddies / puppy chow recipes to try:

Whether you want to call this a recipe for puppy chow, muddy buddies, or something else, the most important thing to do is make it. Because seriously, let’s face the facts; it’s pretty difficult to eat this delicious no bake snack it if you don’t make it first. But it won’t be difficult to make the entire bowl disappear in no time. That classic peanut butter chocolate Chex snack mix is already irresistible. Now add almond and coconut flavors, just like that Almond Joy Candy Bar, and just try to keep your hands away. With almond butter and almonds plus coconut oil and coconut, there is no shortage of deliciousness. 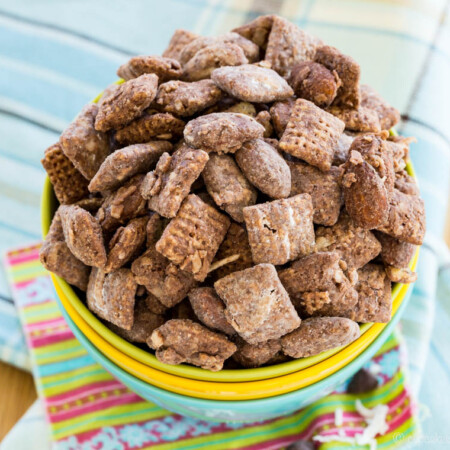