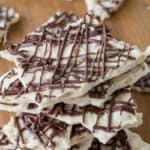 Pumpkin spice white chocolate bark with bits of buttery toffee, a hint of pumpkin pie spice, and a drizzle of dark chocolate is an easy no-bake dessert perfect for fall. This simple candy recipe is one of the best gluten-free no bake dessert recipes to make for the holidays, especially because it makes a great gift. You only need four ingredients plus a few minutes to make this easy Toffee Pumpkin Spice White Chocolate Bark. 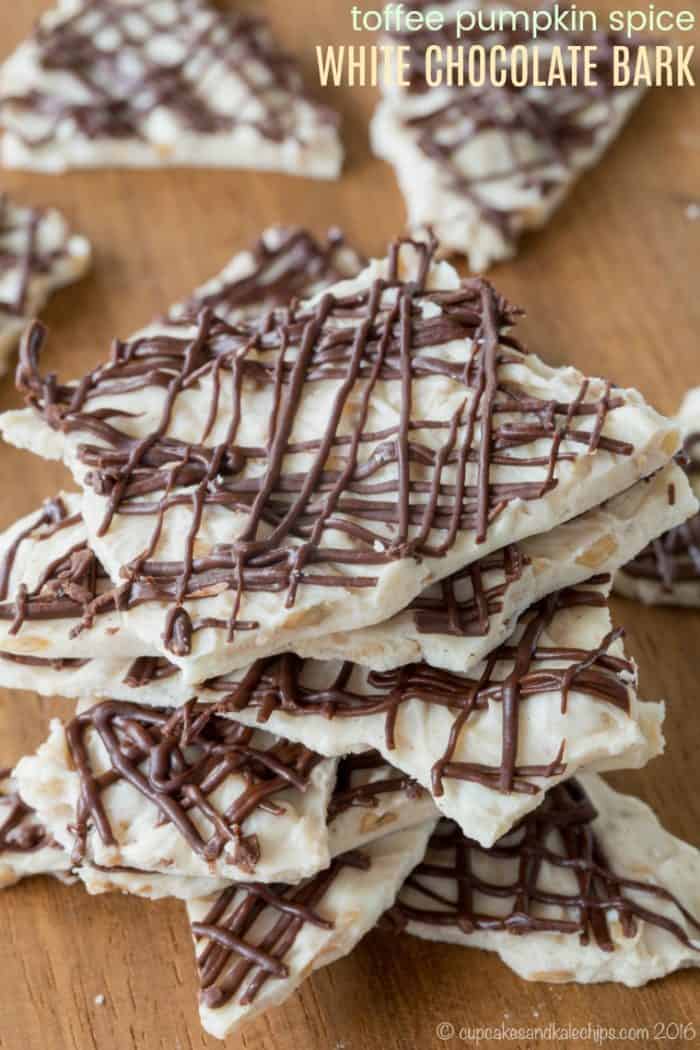 How was your Halloween? Ours was, well, not uneventful, but not complete chaos, so I’ll take it.

We didn’t do any costume-wearing activities prior to the main event, which means I didn’t take out the little guy’s costume until Sunday night, and then found out I bought the one to fit one- to two-year olds, even though it says “Size 2-4” and he wears a 4. I had to squeeze him in, basically making him look like a Teenage Mutant Ninja Sausage. Cue Mommy-Fail Meltdown, until I saw him running around the house gleefully shouting, “My costume is awesome!”

He wore the sausage-casing to school in the morning, but Daddy went to Party City to buy the next size up. It was a different style costume, and while the actual bodysuit portion was the right size and pretty cool, the turtle shell and mask weren’t as nice as the ones that came with his original costume. So we put together bits and pieces of each costume for him to wear trick-or-treating and my “Inja Turtle” (as he called himself) was a happy little dude.

The big guy can’t wear a costume to school and they only have a “Fall Party”. Don’t even get me started on this. Since he was upset that his little brother could dress up for school and he couldn’t, I ordered him a Hogwarts shirt to wear to school today in place of his Harry Potter costume, and then was in a panic late last week when the shipment was delayed. Luckily it arrived on Saturday, and I could sorta bend the no-costume rule by sending him to school as “Harry Hanging Out in the Gryffindor Common Room”.

He had a bit of a piece-meal costume too. Not being the trendiest costume choice this year, Hogwarts robes were hard to come by, and the ones I found online looked kinda lame for the price. So he wore his maroon preschool graduation robe with a cheap black cape and a laminated printout of the Gryffindor crest, and then I bought him a scarf, glasses, and wand, and of course drew a lighting bolt scar on his forehead. I was really worried his costume would look totally makeshift, but it turned out awesome. The kid was so excited and totally in character, and he got so many compliments on his costume as we went around the neighborhood.

So despite some potential costume debacles, all in all it was a good Halloween. Oh, and since it’s the day after Halloween and I’m sure you aren’t at all tired of chocolate, it’s totally appropriate to post a candy recipe, right?!

I hope so, because toffee pumpkin spice white chocolate bark is worth mentioning, and you’ll want to make it pronto. 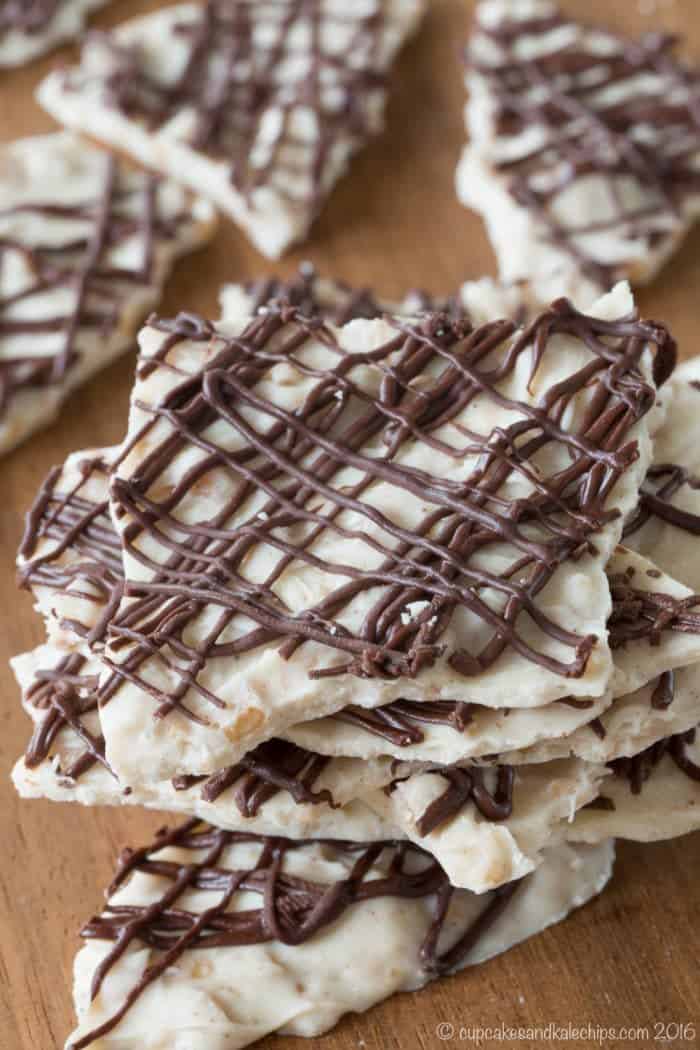 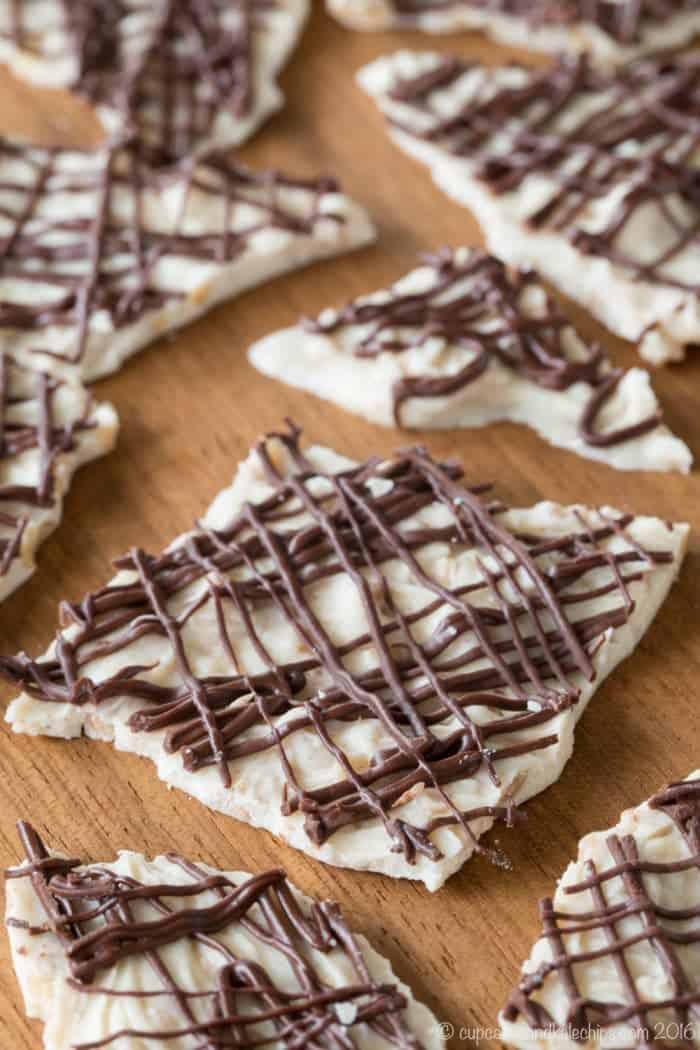 And some from my friends… 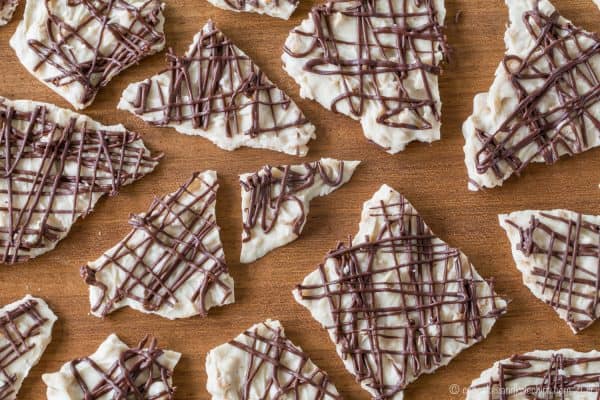 Chocolate bark is one of the easiest treats to make, and so is this Toffee Pumpkin Spice White Chocolate Bark. Plus, triple bonus here. First, those buttery bits of toffee add the perfect amount of crunch. Second, pumpkin pie spice, I mean, need I say more? And the pop of cinnamon and nutmeg are so dreamy with that toffee flavor. And third, spend a few extra seconds melting and drizzling the dark chocolate and not only does it add that amazing combo of dark chocolate with the warm spices, but it makes it all fancy-pants. Homemade candy really doesn’t get any simpler, and yet it looks and tastes totally gourmet! 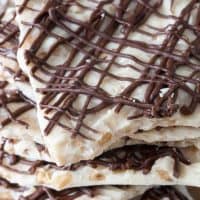 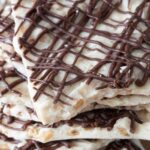