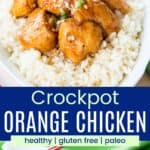 Forget takeout! Make healthy Crockpot Orange Chicken right in your slow cooker. It’s an Asian-inspired paleo recipe with sweet, tangy flavors that you can serve over cauliflower rice. Not paleo? Serve it over white or brown rice and it’s still gluten free. You can also prepare it in your Instant Pot.

I have a gripe with a lot of the slow cooker recipes and especially slow cooker cookbooks that I’ve seen over the years. So many just involve adding some sort of meat, then a packet of this, a jar of that, a can of cream of whatever. I totally get that sometimes people need the super fast convenience of recipes like that.

But I don’t see why the crockpot can’t be used to make healthy, gluten free recipes with fresh, wholesome ingredients. That’s why I am in love with The Big Book of Paleo Slow Cooking by Natalie Perry of Perry’s Plate, and this crock pot orange chicken recipe from that cookbook.

Before you get ready to click away because you don’t follow a paleo diet, just wait. This recipe is totally still for you. While there are a couple of steps more than your usual dump-and-go crockpot chicken recipe, it is still quite easy. And the fresh flavors are unmatched.

You can keep it paleo by serving it over cauliflower rice or zucchini noodles, it is certainly also delicious over brown or white rice. That’s why I love a meal like this – it is so easy to make gluten free, but can be served to those who are grain-free and dairy-free, as well. Just switch up the sides to ensure you meet the needs and preferences of everyone around the table.

Let’s see the healthy ingredients used to make this crockpot orange chicken. Remember, the full quantities are in the recipe card, so keep reading and scrolling. 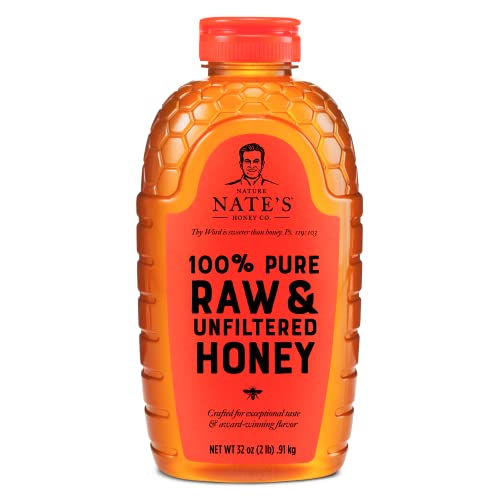 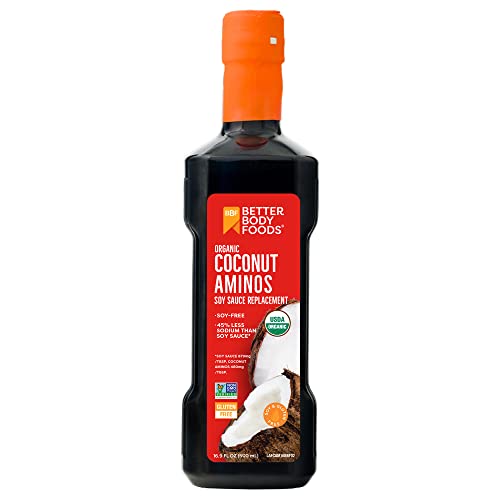 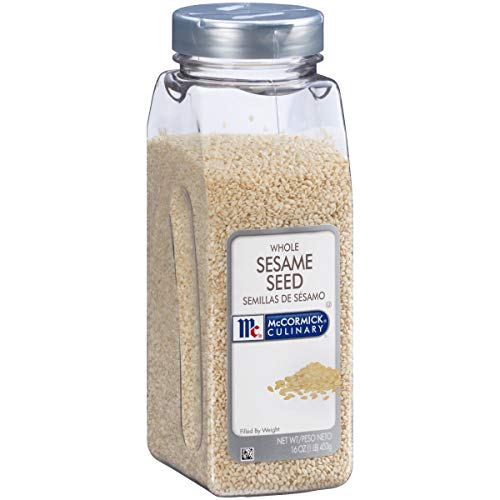 Slow Cook the Chicken. Place the chicken in a 4-quart slow cooker and season with salt. Then stir in the onions, garlic, ginger, orange zest, lemon juice, sesame oil, pepper, and red pepper flakes. Cover and cook on low for 5-6 hours or until this chicken is tender.

Make the Sauce. Remove the chicken and keep it warm. Transfer the liquid from the slow cooker to a skillet and add the remaining ingredients. Whisk in the tapioca flour until no lumps remain. Bring to a boil, then reduce the heat and simmer till thickened.

Combine and Rewarm. Combine the chicken and sauce in the slow cooker and reheat on high for 10-15 minutes, if needed.

Serve and Enjoy. Serve the chicken over cauliflower rice, rice, zoodles, or noodles, and sprinkle with sesame seeds.

What kind of slow cooker do I need?

I’ve been using a large 6-quart slow cooker for years. It’s got fancy timers and thermometers and such, which is perfect when I’m making a big batch of the World’s Best Chili or this Lemon Herb Slow Cooker Roast Chicken. However, when I was making just dinner for four, it was cooking too fast or overcooking. So I spent just a few dollars and got a little 4-quart slow cooker and it’s perfect for this recipe.

Can I make it in an Instant Pot?

Yes, it’s easy to turn this into an Instant Pot orange chicken recipe. You’ll just cook it on the Manual setting for 15 minutes, then use the Quick Release feature to release the pressure. After removing the chicken, leave the cooking juices in the pot and prepare the sauce right in the pressure cooker on Saute. Turn it off and return the chicken and vegetables to the pot. Stir until heated through.

Coconut aminos is a paleo substitute for soy sauce or tamari, but it is made from the sap of the coconut plant instead of soy. It is also a thin, dark liquid with an umami flavor, but it is less potent.

If you aren’t paleo and have trouble finding it, you could substitute soy sauce or tamari (gluten free, if needed), but only use half the amount. It is now available in many regular grocery stores, but you can also order it from Amazon.

Tapioca flour or tapioca starch is a grain free thickener, which is often used in a similar fashion as corn starch in non-paleo cooking. If you aren’t paleo, you can use corn starch, typically half the quantity. You can also use arrowroot as a substitute for tapioca starch.

Leftovers can be stored in an airtight container and refrigerated for two to three days. You can even freeze it for up to two months, so feel free to make a double batch.

Reheat it in the microwave until it is steaming hot. Or put it in a skillet on the stove over medium heat, and cover until it is warmed through. If it needs a little extra moisture, you can add a little chicken broth.

About The Big Book of Paleo Slow Cooking

Whether you are well-versed in the paleo diet, just want to try something new, or are just looking for healthier gluten free meals you can make in the crockpot, I definitely recommend picking up a copy of The Big Book of Paleo Slow Cooking. It is one of the best cookbooks in my collection and has become a staple for me. I’m sure it will for you too.

Natalie brings you around the globe plus reinvents classic American comfort food in a straightforward and wholesome way packed with fresh ingredients and amazing flavors. And if you prefer to use your Instant Pot, Natalie, the author, put together a FREE conversion chart for each and every recipe in the book. So you can decide whether you want to let it slow cook all day or have dinner in a flash when you get home. 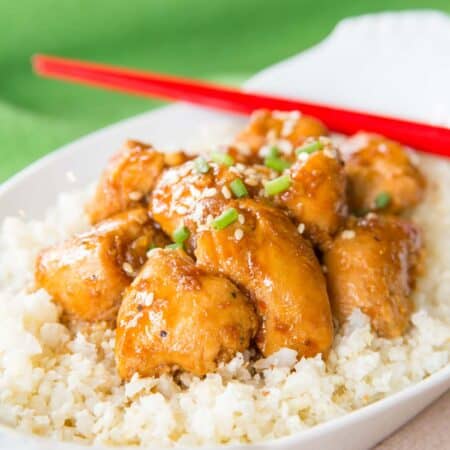 Forget takeout! Make healthy Crockpot Orange Chicken right in your slow cooker. It's an Asian-inspired paleo recipe with sweet, tangy flavors that you can serve over cauliflower rice. Not paleo? Serve it over white or brown rice and it's still gluten free. You can also prepare it in your Instant Pot.
Prep: 15 mins
Cook: 6 hrs 20 mins
Total: 12 hrs 35 mins
Servings: 6
Print Rate Pin Save Saved!
Prevent your screen from going dark

Recipe from The Big Book of Paleo Slow Cooking by Natalie Perry In order to prepare in an Instant Pot, cook on the Manual setting for 15 minutes, then use the Quick Release feature to release the pressure. Then after removing the chicken, just leave the cooking juices in the pot, add the remaining ingredients in step 5, and use the high saute to cook until thickened. Turn off and return the chicken and vegetables to the pot. Stir until heated through.
Author: Brianne @ Cupcakes & Kale Chips
Keywords: orange sesame chicken, slow cooker orange chicken, slow cooker sesame chicken 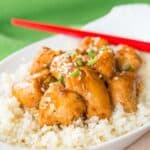