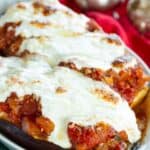 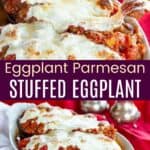 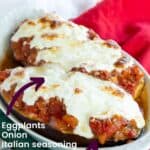 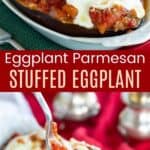 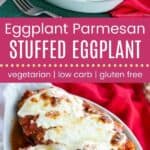 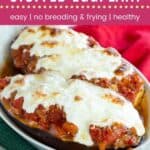 Eggplant Parmesan Stuffed Eggplant has everything you love about traditional eggplant parm, and none of the stuff you don’t. There’s still all the veggie goodness, a flavorful sauce, and plenty of cheese. But you have none of the work and calories of breading and frying. Enjoy it as a light and fresh-tasting gluten free dinner recipe, or serve it with pasta or bread for something more hearty and comforting. Either way, the rich meatless eggplant bolognese sauce and cheesy filling are sure to be a new family favorite for Meatless Monday or any day of the week.

You may or may not know that this is an old recipe from the blog. A really old recipe. Like 2012. That’s old in the food blog world, especially my food blog, which was literally, like, a week old when I published it. So it’s funny to look back on what I wrote and where I was at the time.

Let’s go back, back, wayyyyy back…

I was definitely a newbie when it came to writing a blog. Really, I was even a newbie when it came to recording my recipes. Yes, I am a scientist, and in the lab, I was always very exact with my measurements. I think that is why I love baking – formulas, measurements, acids, bases, heat, reactions, solids, liquids, and gases. It truly is a science. Cooking is definitely more of an art. I am not an artist, but when I cook, it is more of a little of this, a little of that, unless I am following someone else’s recipe. So I decided to start making cooking like a science experiment, and my spiral notebook of recipes became my new laboratory notebook. Just now it says salt and baking soda, instead of sodium chloride and sodium bicarbonate.

I actually didn’t even read many blogs. So as I was exploring and trying to figure things out, I stumbled upon a recipe at Pink Parsley for Lasagna-Stuffed Portabellos, and immediately began drooling and planning when I would make this amazing-sounding recipe. I love lasagna, but since I am gluten free, the idea of gluten free lasagna without even using pasta – I was in!

And we all loved it!

None of us were in a pasta mood that night, so we just scooped up the sauce and cheese with some bread. But this would go fabulously with some pasta (regular or gluten-free), or even some spaghetti squash or zoodles. Or even make just the sauce to go with your noodles.

This stuffed eggplant recipe makes a great vegetarian meal or side dish. Ditch the breading and frying and calories and carbs of traditional eggplant parmesan, but take the hearty sauce and blend of three typed of cheese and stuff it in an eggplant shell for a new twist on the classic that is sure to be a new favorite.

Make it a meal

Simply gluten free for everyone 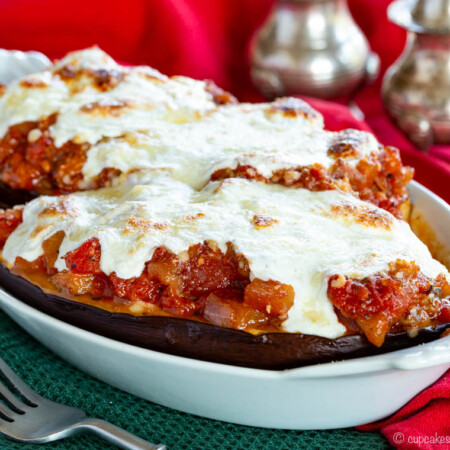 All the best parts of eggplant parm without the work and calories for a meatless dinner or vegetarian side dish.
Prep: 15 mins
Cook: 30 mins
Total: 45 mins
Servings: 4
Print Rate Save Saved!
Prevent your screen from going dark 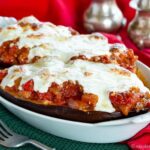 Originally published on Mar 8, 2012. These photos are such gems!