Disclosure: This post may contain affiliate links. Cupcakes & Kale Chips is a participant in the Amazon Services LLC Associates Program, an affiliate advertising program designed to provide a means for us to earn fees by linking to Amazon.com and affiliated sites.
9.1Kshares 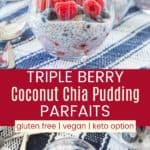 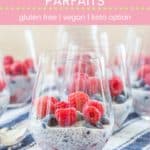 Triple Berry Coconut Chia Pudding Parfaits are a healthy addition to your Memorial Day, Fourth of July, or Labor Day menu with it’s red, white, and blue colors and fresh, seasonal flavors. The fruit adds a summery, patriotic appearance to this gluten free, vegan, and paleo breakfast, dessert, or snack.

These coconut chia seed parfaits will give you superfood energy and plenty of strawberries, blueberries, and raspberries. 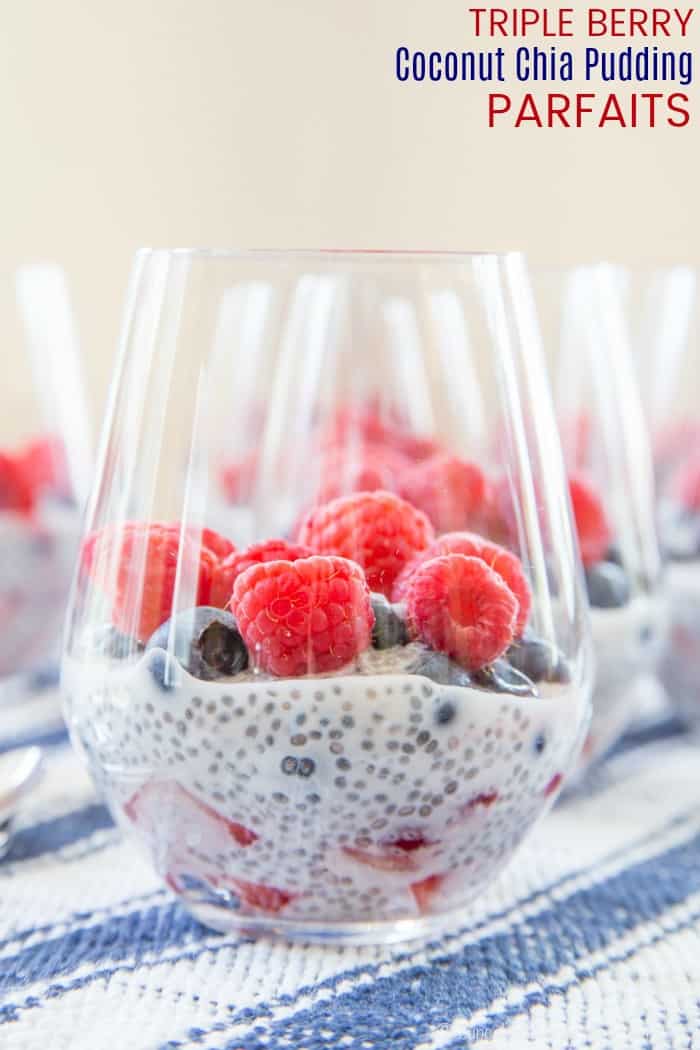 Summer unofficially kicks off this weekend and every year feel like it’s going to be over in a flash.

A couple of years ago, between Memorial Day and the end of August, I traveled to Portland, Oregon, and Orlando, Florida for conferences, Portland, Maine for the 10K I ran, and Orlando for a big Disney vacation with the family. Both boys went to a camp run at the local schools for two weeks, and the big guy had a week of karate camp. We had tickets to a Yankees-Orioles game, the closeout of the tee ball season spent a few weeks at my mom’s so that we can hit the beach, and mom stayed with us for a week. And this doesn’t even take into account pool days and tons of great parks and hiking trails and places to go fishing in the area.

This summer I’ll be in Oregon for Memorial Day weekend, there’s a Cub Scouts weekend camping trip, a couple of weeks of science camp for the big guy, several more weeks of camp for both kids, a couple of weeks at my mom’s, and vacation to Virginia Beach. Plus we have some baseball tickets and might try to get to some concerts.

Geez, just typing that makes me feel like summer is practically over before it even begins!

Just like in past summers, if you don’t see me buzzing around social media or maybe recycling some old posts with new photos, or maybe taking the route of writing posts along the lines of “I made this recipe and it was yummy. You should make it too.”, it’s because I’m having a blast with my boys.

And of course, in the midst of having the most fun ever, we have to eat the yummiest food ever… 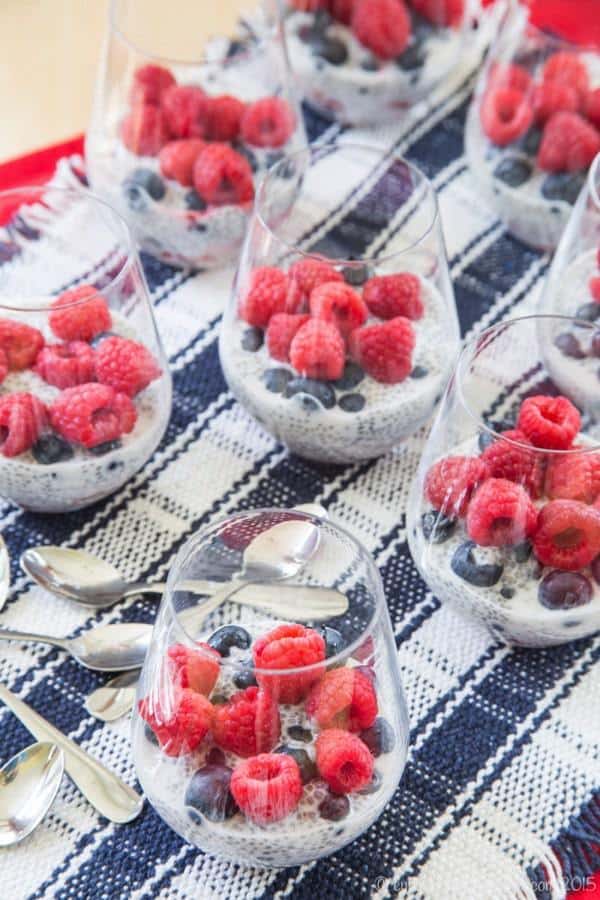 What did family and friends think about Triple Berry Coconut Chia Pudding Parfaits?

When I made coconut chia cream for the tropical fruit salad, The Hubby said I had to make it again for other recipes. If the man says that about chia seeds, I have to listen. But this time I paired it with the best berries of the season – which coincidentally make this parfait perfectly patriotic. Juicy, sweet berries, rich and creamy coconutty goodness, all layered in a glass – the epitome of summer!

We had a couple of The Hubby’s coworker over for dinner, and kids and adults alike devoured these parfaits. My boys were thrilled that there were a couple left so that they could have them for breakfast the next morning. The kids might have declared it the best breakfast ever! 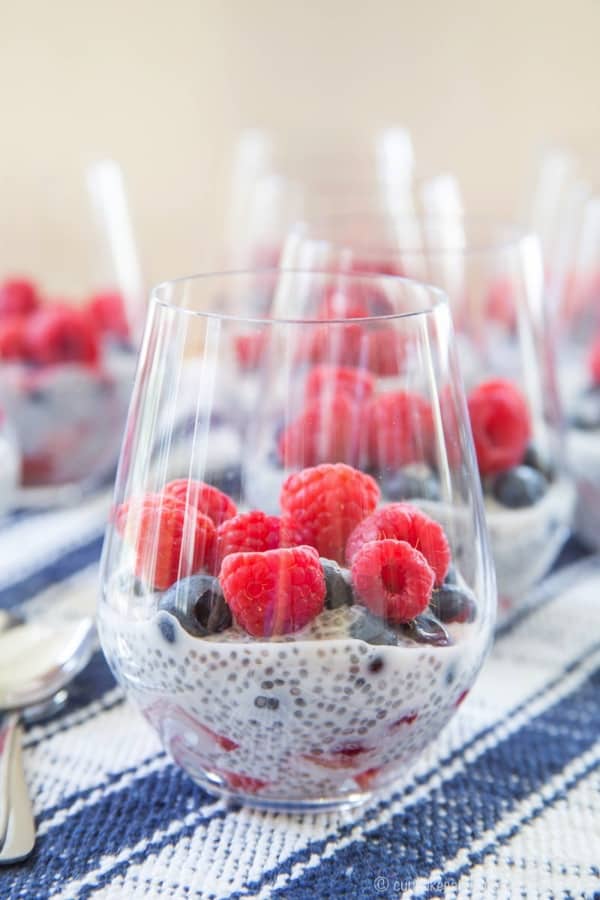 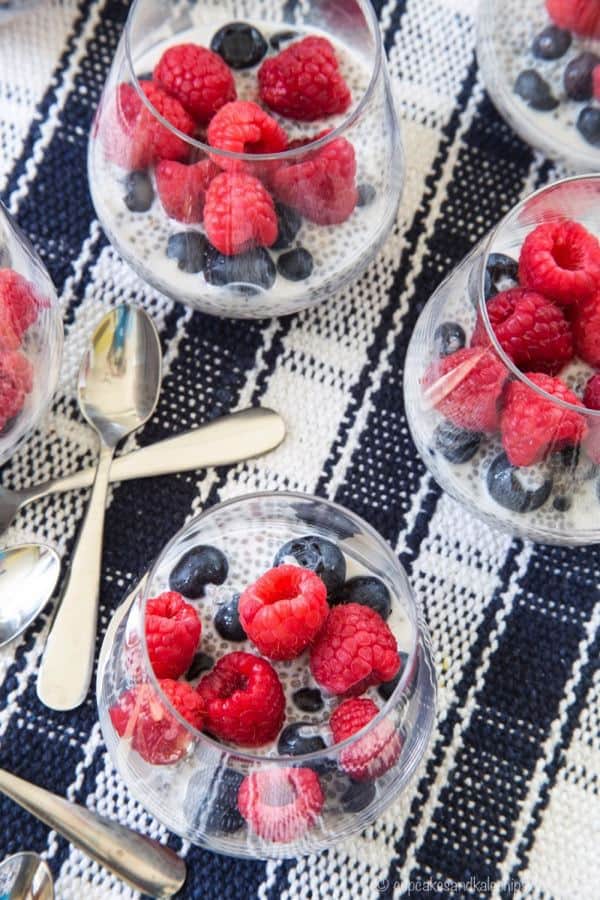 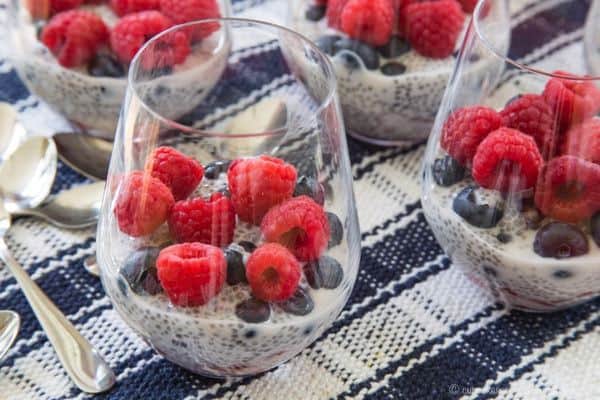 What do you need to make Triple Berry Coconut Chia Pudding Parfaits?

Want some other chia seed recipes?

What are more healthy red, white, and blue desserts?

These treats are so good for you, but most importantly, they are absolutely delicious. Perfect for summer holidays or any day when fresh berries are in season, this is such a simple dessert to whip up. It tastes like a rich and creamy, but this healthy dessert recipe is nutritious, naturally gluten free, and can be vegan and paleo depending on your choice of sweetener. If you love this chia parfait recipe as much as we do, I hope you’ll leave a comment and give it a FIVE STAR rating and share a photo on this pin on Pinterest! 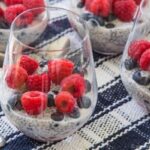 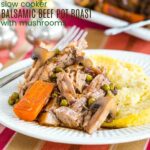 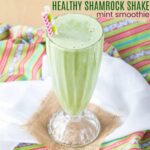 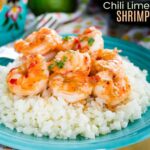 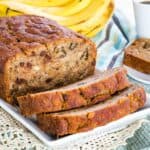