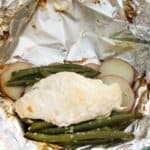 Lemon Chicken Foil Packets with parmesan green beans and potatoes pack your entire dinner in one little pouch. Whether you toss them on the grill or bake them in the oven, these chicken foil packs are easy to make and even easier to clean up, plus completely delicious. When you need quick and easy dinner recipes, these hobo packs are the answer. A simple marinade, fresh ingredients, and layering in aluminum foil is all you need for family-friendly, healthy, and delicious lemon chicken foil packet dinner recipe. 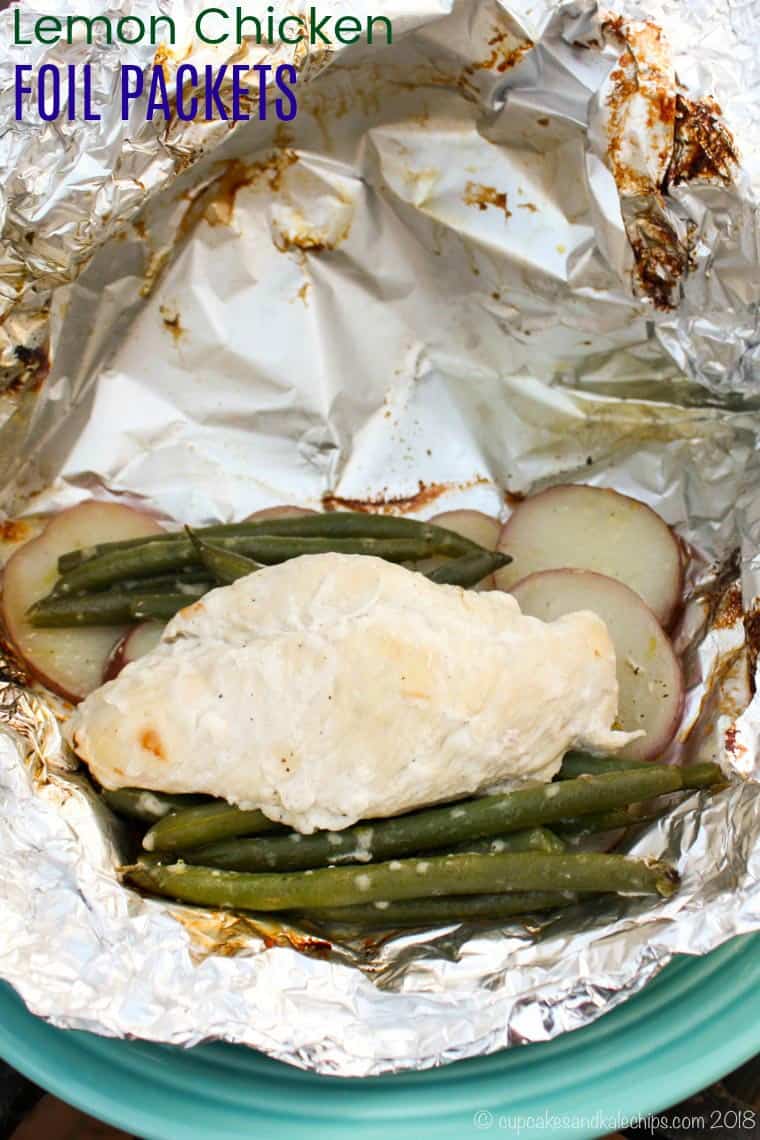 It’s March, and I am grilling. That never happens! This has been the weirdest winter, and being somebody who is always cold and hates being cold, I am not complaining. It would have been nice to have one good snowstorm, so that I could get a chance to play in the snow with The Bug, since he was not even walking last winter. And since I spent good money on snow pants and boots, because if you don’t buy them in October, there will inevitably be a blizzard in December, at which time all of the snow pants and boots are gone, and you are left deciding on what swimsuit you want for the summer. But that is neither here nor there.

Back to grilling. The Hubby loves meat, especially grilled meat. So sometimes, even in the coldest winters, he will go outside and grill a rosemary balsamic marinated flank steak on a Saturday night. He has even been known to dig a path through the snow to get to the grill. Not me. I wait until I can go outside in a tee shirt and flip flops before I am going to go outside of my nice, cozy kitchen to cook dinner. Seventy degrees in March calls for cooking dinner on the grill. So I threw together these tasty little packets, tossed them on the grill went inside to set the table, play with The Bug and say Hi to The Hubby. Then 20 minutes later, dinner was on the table. 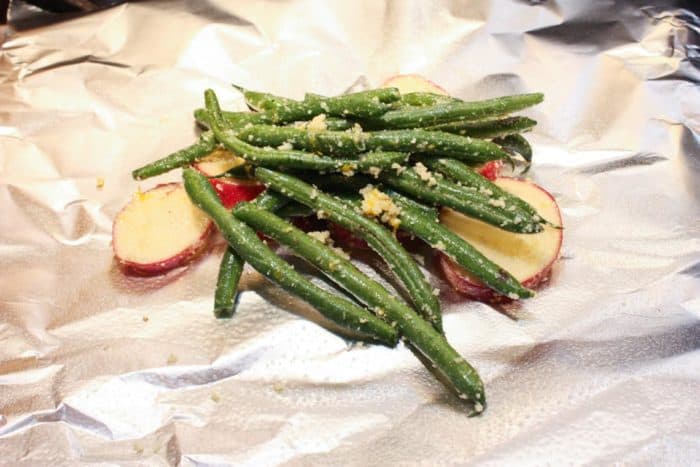 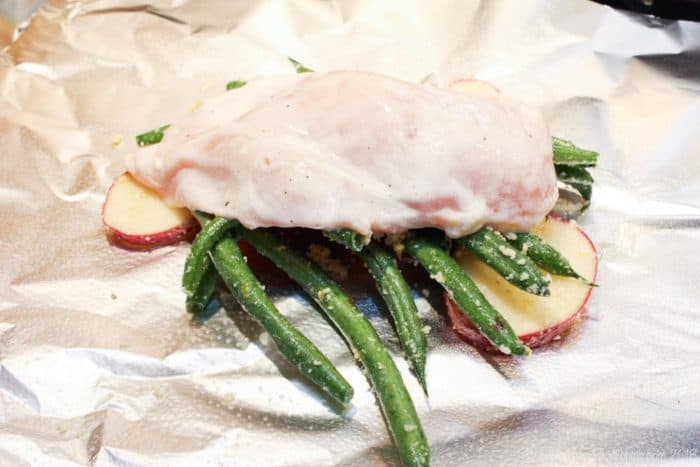 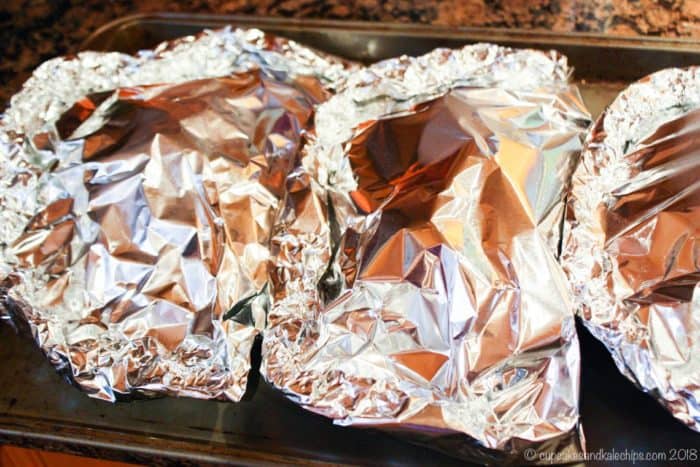 If you don’t have a grill, don’t know how to use your grill, or, you know, live in North Dakota where it is too cold to grill, especially in March, you can always throw the packets in the oven.The Greek yogurt and lemon juice marinade give the chicken so much flavor, and help to create a little lemony sauce and some steam to cook the poatoes nice and soft, and the green beans still slightly crisp.

I didn’t get a picture, but The Bug was a fan! Well, truthfully, he did not eat the beans. Even when I put ketchup on them (yes, he is one of those kids who will eat anything with ketchup – but I do make my own. I’ll get to that in another post). For some reason, he will eat green beans at school, but at home, he won’t go near them. Whatever. Potatoes are always a hit, but he can be picky about meats. And this chicken was so tender and flavorful that he devoured almost as much as I ate! The Hubby isn’t the biggest fan of green beans, but he indulged me when I want them sometimes, and he thought they were pretty good. 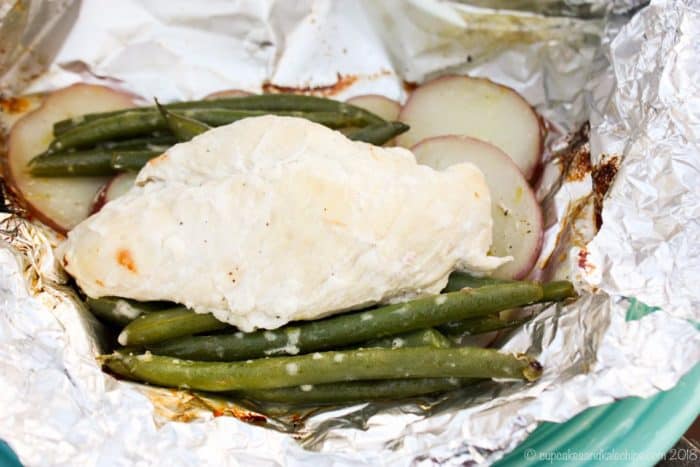 When you pair chicken breasts marinated in a simple mixture of lemon, Greek yogurt, garlic, and thyme with potatoes and green beans tossed in olive oil and you have a meal the family will love. Cook it all in a foil packet on the grill or in the oven and it makes it even better because cleanup is a cinch. Keep the kitchen cool by cooking it all on the grill, or enjoy this as an easy dinner recipe year round by baking the lemon chicken foil packets in the oven. You can even toss it on the campfire for your next camping trip. 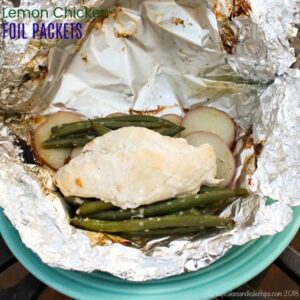 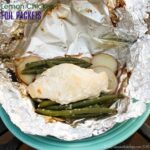