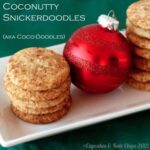 I like to think of myself as a little bit scientist, a little bit artist. I read, study, observe, and experiment. But I also throw in a little of this and a little of that, fancy things up a bit. I do this is pretty much all aspects of my life. All except baking…

When it comes to baking, I usually stick to a recipe that someone else (perhaps lots of someone else’s) has tested and gives me reasonable assurance that it is going to turn out well. I think this is due to my frugal nature. I have confidence in cooking that even when I play around a little, it is still going to turn out well. But baking, well, I have baked a ton, but have not experimented enough or studied ratios and formulas to feel confident that my experiments will turn out well. And I hate throwing things away, so then I just feel compelled to eat way too many calories worth of crap. This is part of the reason why I haven’t delved into gluten free baking as much as I would like. But these coconut snickerdoodles…

Well, to be honest, I haven tried them, but The Hubby gives them a big thumbs up.

I make Snickerdoodles every Christmas for my dad, but the recipe calls for half shortening and half butter. I make them that way because he loves them, but I thought it might be interesting and just a bit healthier to substitute coconut oil for the shortening. I also threw in a bit of coconut flour (though this is optional), and instead of rolling them in cinnamon-sugar, I ground up some sweetened coconut in my Magic Bullet to make a sugary coconutty cinnamon coating.

The Hubby says that the coconut snickerdoodles have just the right amount of coconut – a hint. But the coconut doesn’t overpower the cinnamon, nor does the cinnamon overpower the coconut. Success! Maybe I’ll experiment some more to make them even healthier, perhaps some whole wheat flour, or maybe even gluten-free. I’ll keep you posted. But for now, try these if you want a new spin on the classic Snickerdoodle. I can’t wait to let dad try them.

Do you experiment with baking, or do you just stick to the recipe?

I hope so, because coconut snickerdoodles are a delicious way to eat coconut! 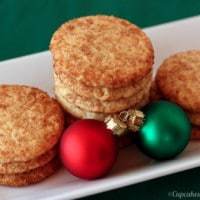 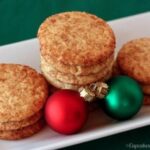 If you love Snickerdoodles, be sure to check out these recipes, too: