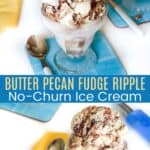 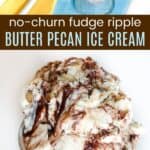 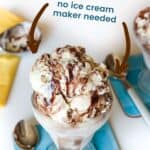 Butter Pecan Ice Cream swirled with ribbons of chocolate is sure to put a smile on everyone’s face. Full of buttery nuts and a velvety fudge ripple through a creamy no-churn ice cream base, forget just a scoop, you’ll want a big bowl for dessert. And it doesn’t get any easier since you don’t even need an ice cream machine!

I love my mom. Even when she drives me crazy. I mean, I think that is part of a mom’s job, and most of the things that make me nuts are also the things that I love most about her.

No matter where we go, we see someone she knows, and she just has to stop and talk. And talk. Then talk some more. But it is because she is so friendly, approachable, and truly cares about people.

She is always giving my boys food and toys and stuff that I think they don’t need. But that is because she just adores them so much.

If I am cooking or eating or doing anything in the kitchen, she starts cleaning up before I am even done, not even asking if I am still using the stuff that is out. But, hey, she’s cleaning up after me, so I’ll take it.

Honestly, these are some of the traits I wish I had inherited from her – her more laid back, outgoing, neat-freak personality.

But what did I inherit from her? A total love of ice cream, and I’m not mad about it.

So today, to honor my mom, I’m making ice cream. Butter pecan ice cream, to be exact, since that is her favorite.

But when I was chatting with her and brainstorming the recipe, she said she wanted chocolate, too.

And that is how Fudge Ripple Butter Pecan Ice Cream was born.

What is butter pecan ice cream?

Butter pecan is an all-American flavor you’ll often find in cookies cakes and other desserts that combines pecans, butter, and vanilla to add rich, nutty, buttery flavors to those treats. But perhaps most popularly it is found in ice cream.

Butter pecan ice cream starts with a vanilla base, then adds the butter and nuts. It may not rank quite as high as chocolate and vanilla, but it does always end up near the top of the list of Americans favorite flavors.

You’ll find many brands have their own version from Baskin Robbins to Haagen-Dazs, and even Ben & Jerry’s (though you’ll have to go to a Scoop Shop because they don’t have it in cartons).

How do you make no-churn ice cream?

No-churn ice cream is an easy way to make your favorite frozen dessert even if you don’t have an ice cream maker. The base is made from folding sweetened condensed milk into whipped heavy cream and freezing it.

But before you freeze it, you can add any of your favorite flavors and mix-ins. Keep it simple with vanilla extract or cocoa powder. Have some fun with Birthday Cake Ice Cream. Or even go with a seasonal flavor like Pumpkin Ice Cream.

That chocolate mom wanted was added in the form of a swirly ribbon of fudge just winding it’s way through the rich, creamy, dreamy no-churn ice cream. It is studded with crunchy pecans that had been toasted in some lightly browned butter for added nuttiness and a little salty flavor to balance all of the sweet goodness.

Oh yessssss! You don’t have to do much more than whip some cream, brown some butter, and throw it in the freezer. Seriously, people, try this easy ice cream recipe. Yeah, it’s rich. Yeah, it’s indulgent. But these are the sacrifices I make for my mom.

For the butter pecans

For the fudge ripple

For the ice cream

For the butter pecans

For the fudge ripple

For the ice cream

Although this pumpkin roll recipe is straightforward, it does have a lot of steps. Here are my surefire tips to make sure you’re able to make the best cake roll ever!

To be able to whip the cream to soft peaks without over-churning it, the heavy cream should be very cold. I also recommend using a metal bowl and putting your bowl and beaters in the fridge or freezer. The colder everything is, the easier it will whip up without overbeating.

You want to gently fold the sweetened condensed milk and pecans into the whipped cream to avoid deflating it. This produces creamier ice cream.

Is it gluten free?

The base of no-churn ice cream is just heavy cream and sweetened condensed milk, which are both naturally gluten free. So as long as all of your additional ingredients that you use to flavor and mix into the ice cream are gluten free, then you have a gluten free ice cream.

In this recipe, again, all of the ingredients are naturally gluten free. Occasionally some lower quality brands of vanilla extract or chocolate chips may add colors or flavors that are not gluten free, so do be sure to read the labels.

How long does no-churn ice cream take to freeze?

This will depend somewhat on how cold your freezer is and the dimensions of your container. But generally I recommend leaving it in the freezer for at least 4 to 6 hours. Though usually I will make it the day before I plan to eat it so it can freeze overnight.

If you’ve put the ice cream in the freezer overnight, you may need to let it sit out for a couple of minutes to make it easier to scoop. 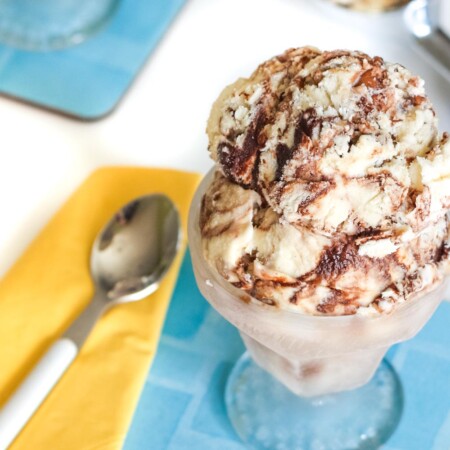 For the butter pecans:

For the fudge ripple:

For the butter pecans:

For the fudge ripple: 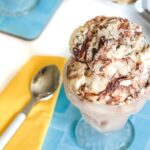 Mom’s favorite recipes from from of my favorite bloggers