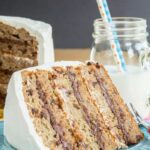 An impressive dessert made with layers of moist banana cake studded with chocolate chips, separated by schmears of Nutella and cream cheese whipped cream. With options to make this cake gluten free, and to use roasted bananas if yours aren’t ripe, you’ll go bananas for this Banana Chocolate Chip and Nutella Cake recipe.

You guys, it’s a miracle! I’m posting a recipe for a food that is being celebrated in one of those whack-a-doodle food holidays the day before the actual holiday. I’m not going to mention that I actually made this cake nearly a year ago. Well, the first time I made it was several years ago, and then last year I made it gluten free. So it was last March, for Little Dude’s second birthday, to be exact, that I made and photographed this cake. And then proceeded to since to him and serve the poor kid’s cake with a slice removed and then smooshed back in place.

Oh, cut me some slack. The kid got two cakes. On the weekend before and the weekend after his birthday.

Both with slices take out and put back in. The kid that doesn’t like cake.

And a terrible food blogger, because if I were a good food blogger, I’d have posted this recipe (yes the one that has been residing inside my computer for the past, oh, ten months or so) several weeks ago so that it could have made the rounds on Facebook and Pinterest prior to World Nutella Day, which falls on February 5th. That way I’d have had the time to convince the entire world that they absolutely have to make it to celebrate such a noteworthy day on the calendar. And again, if I were a good food blogger, when I decided to post a recipe the day before said food holiday that features said food being celebrated on said food holiday, I might have chose something a bit less involved.

Totally worth it? OMG, yesssss…

Now that I’ve gone on and one about it, let me tell you a few things. This recipe is slightly adapted from one I found on the Cooking Channel website. Originally I made it as-is. Absolutely incredible and impressive and I might have eaten about half the cake. When I made a gluten free version, I simply subbed in my favorite gluten free blend, Bob’s Red Mill 1-to-1 and it worked like a charm. My bananas also weren’t ripe enough, and I had just seen this milkshake from One Sweet Mess, so I decided to roast my bananas. Perfection. And because I like a good ratio of frosting to cake, I decided to slice each of my layers in half, and alternate the Nutella and Cream Cheese Whipped Cream between the cake layers. It’s a simple step that makes the cake even more monstrously tall and impressive.

So even if you don’t have time to make this cake for World Nutella Day, someone special deserves this towering cake of awesomeness, even if that someone special is you. Go for it people!

Who in your life deserves a special cake?

A few things you need for this cake: 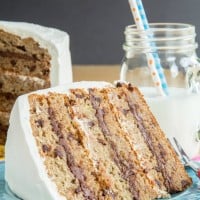 Nutella Chocolate Chip Banana Cake is a decadent dessert made with layers of moist banana cake separated by Nutella and cream cheese frosting. With the option to make this cake gluten-free, dietary restrictions won't stop anyone from sitting down to enjoy a slice.
Prep: 1 hr
Cook: 45 mins
Cooling Time 15 mins
Total: 2 hrs
Servings: 16
Print Rate Save Saved!
Prevent your screen from going dark

For the Whipped Cream Cheese Frosting

Here are some more of my favorite Nutella recipes…

And a few from my friends…