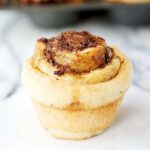 Cinnamon rolls, a Christmas classic in my book, and chocolate combine to create a new holiday sweet roll favorite. No holiday brunch or Christmas morning breakfast should be complete without Chocolate Cinnamon Rolls.

The Twelve Guest Posts & Roundups of Christmas continues with this fabulous recipe from my friend Heather!

I am so happy to be sharing this recipe with you today. I have been a follower of Brianne’s for SO long. I think it’s the name Cupcakes and Kale Chips that got my attention first. I happen to love both cupcakes and kale chips, and I LOVE all the great recipes she shares.

When Brianne asked for some help during the holidays I jumped at the chance. The holidays are CRAZY for us all, I could not imaging adding a BIG move into the mix.

SO anyways here I am for Cupcakes and Kale Chips The Twelve Guest Posts & Roundups of Christmas Giveaway , and I am sharing a new family holiday favorite, Chocolate Cinnamon Rolls. We LOVE cinnamon rolls, and I make them as often
as I can, even more so during holiday time. They have been our go-to neighbor gift for years.

This year to jazz things up a bit, I added chocolate to the cinnamon and brown sugar filling. Chocolate and cinnamon
is a terrific combo in case you were wondering. I add cinnamon to my hot chocolate mix all the time. My daughter was a bit skeptical at first, but then she took a bite, and she has not stopped eating since. I see MANY pans of chocolate cinnamon rolls in my Christmas baking future.

I thought that the filling was sweet enough, so I skipped the classic cinnamon roll glaze, but if you want to add
it, go for it. I don’t think anyone would complain one bit.

However you are celebrating this holiday season, Enjoy! 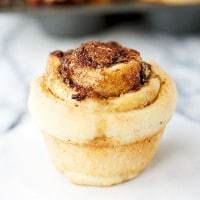