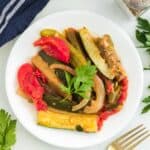 For the Eggplant and Zucchini

For the Onions and Peppers

Grill the Onions and Peppers

Very slightly adapted from Mastering the Art of French Cooking by Julia Child.