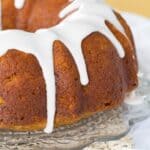 For the traditional recipe with all-purpose flour, use 2 1/2 cups all-purpose flour in place of the other flours, starches, and xanthan gum. Prior to sifting the dry ingredients together, toss the apples in one tablespoon of the flour and set aside. Bake at 350°F for 60-65 minutes. Cake adapted from Summer Pound Cake by Barefeet in the Kitchen. Glaze and icing adapted from Champagne Pound Cake by Crazy for Crust.