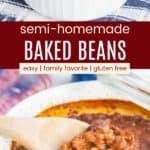 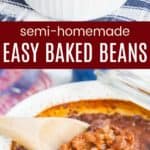 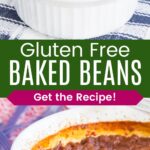 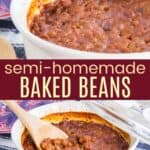 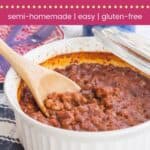 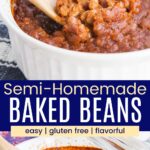 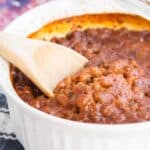 Secret-Ingredient Easy Baked Beans will have family and friends begging for the recipe. All of the flavors of slow-cooked beans, but none of the effort. It’s a semi-homemade version of the classic barbecue side dish, and now I’m sharing it with you. And you don’t have to tell anyone that it starts with canned baked beans! Plus they are gluten free too!

When I was about thirteen, we moved out of the house that we had lived in since I was born. It was touch moving away from our hometown, especially in the middle of winter when there were still only five houses in the neighborhood.

Ultimately, though, we came to love “The Village”, as my sister called it when she was little.

There were only two streets that made a circle, so once all the houses were built and filled, pretty much everyone knew everyone. The kids would roam from house to house finding where and with whom they wanted to play.

Parents would gather on someone’s front porch or back deck to have a glass of wine or a beer and chit chat. And it took at least a half-hour to walk around the very small block because you undoubtedly stopped several times to catch up with someone.

There were community picnics and yard sales, kickball tournaments and even some shenanigans. And of course, neighborhood barbecues. That was where we were first introduced to Laura’s beans.

In fact, that’s how the recipe is labeled in my mom’s little recipe book – “Laura’s Beans”. But honestly, I can’t remember the last time I referred to the recipe. I usually just added in a little of this, some of that.

As I made this easy baked beans recipe more and more, they gradually became known as Brianne’s Beans. Now, they are often requested and rapidly devoured by friends and family alike.

So I finally thought it was time to, you know actually measure the ingredients and share it with the world. It’s your call whether you tell what the secret is…

So the question is, how do you get that cooked-all-day flavor without, you know, cooking all day?

I’ll tell you my secret. Shhhh…

You start with a can of baked beans!

You already have beans that are already soft and tender and have absorbed the seasonings. As a result, you don’t have to deal with the time and labor of cooking dry beans. But then you dump out all the liquid and replace it with something way yummier.

This gives them an even bolder, more intense flavor and a deliciously rich, thick, gooey texture that is just so much better than that liquidy stuff in the can. And it’s barely any more work than dumping canned baked beans in a pot, but totally worth it. It’s a gluten free side dish recipe that’s the hit of every summer cookout!

Brianne’s cooking tips: You can cook them in an aluminum pan if you are bringing them to an event and don’t want to worry about retrieving your dish. And then just throw them on the oven or grill until they are hot.

But my favorite thing to get the best flavor and texture is to bake them in a casserole dish and leave them in a low oven for as long as possible to really let the flavors intensify.

Beans themselves are typically not low carb, and many brands of baked beans in a can and homemade recipes add additional brown sugar or molasses. So these are not a low carb recipe.

That being said, this recipe does remove all the liquid, and it only calls for a bit of molasses. For those that like sweeter beans, you can add brown sugar. However, we tend to like less sweet and more mustardy beans, so I usually leave it out.

If you are concerned about the carbohydrate content, you can make low carb baked beans!

Keep all of the flavor but lose all of the work in this easy version of the classic barbecue side dish. It’s a gluten free baked beans recipe that’s the hit of every summer cookout!
Prep: 15 mins
Cook: 1 hr
Total: 1 hr 15 mins
Servings: 6
Print Rate
Prevent your screen from going dark