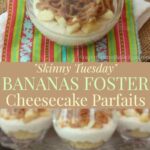 Bananas foster cheesecake parfaits are a yummy combination of creamy cheesecake, caramel, and bananas, just like a traditional bananas foster dessert! They’re also one of the best gluten-free no bake dessert recipes you can make for Mardis Gras!

Fat Tuesday, Mardi Gras, whatever you call it, always has the best food for the party. But after indulging in beignets and po’ boys and gumbo, I decided to lighten things up a bit, while still keeping the flavors of a classic New Orleans dessert. Enjoy the yummy combination of creamy cheesecake with the caramel and bananas from traditional banana foster, all in a healthier, portion controlled, but still indulgent-tasting treat with these “Skinny Tuesday” Bananas Foster Cheesecake Parfaits.

Have you ever been to New Orleans? How about Mardi Gras? I sort of get the feeling that those are two different things. You know, if you’ve only been to New Orleans during Mardi Gras, that basically you’ve seen Mardi Gras, but haven’t seen New Orleans. I don’t know, maybe I’m wrong, but I was there back in, hmm, 2003-ish. It was for a chemistry conference (fun times, right?), and since I was still single with no attachments and some extra money, I flew down a few days early to walk around and experience the city. It was actually around St. Patrick’s Day, which I am told is like “Mardi Gras for Families”. You know, all the parades and floats and beads, but none of the exposed body parts.

Somehow I ended up hanging out with the sales reps at the conference and not the chemists. As a chemical engineer, I think the chemists outcast me. That was cool, though, because the sales reps have travel and entertainment budgets. This meant free Hurricanes for me! Which, after a round or two of Hurricanes, led to us somehow ending up IN a parade down Bourbon Street.

Like I said – fun times! 🙂 Well, fun times after I ditched the chemists.

I didn’t actually have Bananas Foster while I was in New Orleans, but I was introduced to it at one of my favorite Jersey Shore seafood restaurants. The spectacle of the waiters and waitresses wheeling around the carts, coming up to your table, and making your dessert right there in front of you is so cool. Oh, and the fire. Flaming alcohol is always fun, right? And then those warm, caramelized bananas poured over scoops of vanilla ice cream, causing it to begin to melt. Heaven!

We actually served bananas foster as a dessert at my wedding, as a bit of a nod to one of my favorite places down the shore.

So bananas foster cheesecake parfaits hold a special place in my heart.

But, I did want to make it healthier, since many of my Facebook fans mentioned they would love some “cleaner eating” desserts. These cheesecake parfaits are completely grain-free and gluten-free, with a simple almond meal “crust” (though you could easily sub in graham crackers). The bananas foster-style caramel is made from dates, with a little cinnamon and rum extract. And some of this caramel and mashed banana is used to sweeten up a cheesecake-y mixture of cream cheese and plain Greek yogurt to bring in the creamy element that typically comes from the ice cream.

The date caramel was surprisingly, well, caramel-y. I can totally see using this in many more recipes, with different flavorings and extracts. Or, you know, just eating it with a spoon. The caramel and bananas added the perfect sweetness to balance the tartness and tang of the Greek yogurt cheesecake layer. I could easily have polished off three of these myself. In fact, over the course of two days, The Bug and I put away five of the six.

The Hubby taste tested the other one – well, I should know not to tell him it was “healthier”. Anytime I mention there is Greek yogurt in a dessert, he says “I don’t detect any sweetness.” Umm, whatever. But if you aren’t a Greek yogurt fan or you only like super-duper sweet desserts, this may not be your thing, but The Bug and I beg to differ. 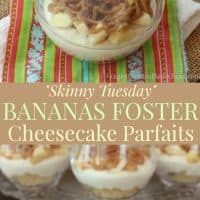 For the cheesecake layer:

For assembling the parfaits:

For the cheesecake layer:

For assembling the parfaits:

Are you looking for some more “skinny” cheesecake desserts for Fat Tuesday (or any day):

Need some ideas for your Mardi Gras Celebration? #SundaySupper has you covered: