#SundaySupper is traveling the globe for the best of Street Food this week, and I made you my favorite street food. Tacos? Nope! Sandwiches? Nah! ICE CREAM! Banana Nutella Swirl Gelato, to be specific.

The Hubby and I went on vacation twice to Italy. Once to Florence and Rome, and the second time we traipsed around Tuscany. And it was the same thing pretty much everyday. Wake up, get a little (and I mean little…  you’ll see why) breakfast at the hotel, go do some sightseeing. The we’d get “lunch” – GELATO!!! We’d either sit in a piazza or stroll the cobblestone streets and people watch as we savored every flavorful, creamy bite. Then more sightseeing, maybe a little evening nosh at a bar. The night would end with the typical Italian late dinner where we would stuff ourselves with antipasti, pasta, secondi, and vino. Always vino. Then occasionally maybe some dessert…  or more gelato. Finally we would roll ourselves back to our hotel and fall into a food coma.

I don’t think we ever hit the same gelateria twice. We had to try them all. First I would ask how many different flavors I could get in the size cup that I planned to order, and, since I have no ability to make decisions, I’d get the maximum that they would squeeze into that cup. I would always get different flavors – whatever caught my eye that day, but usually it included chocolate or nuts or the chocolaty, nutty goodness that is Nutella. He would try a different flavor here or there, but he always got coffee. He felt he needed a constant so that he could compare one gelateria against another. Always the scientist!

I am getting so nostalgic writing this. The last couple of trips I made to Italy were for work, and I had very little time or opportunity to get gelato. Sure I had a cup or two, but it wasn’t the same without The Hubby with me, comparing notes, trading bites, and just soaking up La Dolce Vita.

But I was pleasantly surprised. Shocked, let’s say. it’s dee-lish. Let me tell you, I ate over two-thirds of it. I shared the last bit with The Hubby. Begrudgingly. But I suppose I needed another opinion, though I would have been happy to convince you to make it simply with my own. Because, well, yum!

Honestly, I would not call this a classic gelato. With it being mostly fruit, I’d put it somewhere as a gelato-sorbetto hybrid – slightly less creamy and little more, well, icy, I suppose, but still surprisingly soft and scoopable. By using super-ripe bananas and not many other ingredients, the true banana flavor shines through, and doesn’t require a ton of added sugar. Don’t be afraid of the rum. You don’t taste it, there is hardly any there, and I am guessing, based this article from David Lebowitz, is probably key to keeping it from becoming a frozen brick. The swirls and chunks of Nutella pair perfectly with the banana, like little nuggets of happiness floating in a frosty banana cloud.

Plus, this is EASY! Yes, you need an ice cream maker, but no separating eggs, no cooking, no custards. Just puree, mix, churn, swirl, freeze. Done and done!

Also, side note, being a Polish girl, I was hoping to do a Polish street food. But man to the Poles like their wheat-y carbs, and my allergy was not down with that. So in my research, I found that in Poland, lody, or ICE CREAM, is one of their favorite street foods, particularly fruit-based ice creams. So while this is not a typical Polish-style lody recipe, I do feel like I am also giving a nod to my heritage.

What is your favorite street food? 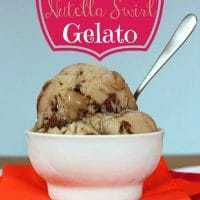 Check our all of these global street eats!

Bread on the Boulevard

Sweets on the Streets

And how about some more of my favorite international recipes: